The new Perth Centre not only gives the city a convention and exhibition base, but it opens up opportunities to develop a more people-oriented foreshore

Designing a large, new public building requires far more thought than simply considering the layout, building requirements and carparking needs. The impact on the immediate environment and on the overall cityscape must also be part of the planning process.

Such was the case for the new three-level Perth Convention Exhibition Centre – known as The Perth Centre. Located in the heart of the CBD, it includes a 2500-seat tiered auditorium, 19 specialist meeting rooms, six exhibition pavilions providing 16,500m2 of exhibition space, and a grand ballroom with spectacular views of Perth's Swan River.

Murray Etherington, the project director for Cox Architects, says the design objective was to create a building that was as horizontal and inconspicuous as possible so it would ‘hug' the foreshore.

"We did not want the new building to impose on the city skyline, which has always been dominated by the foreshore and the existing vertical architecture behind it. To achieve this, we designed a horizontal building with an undulating roof and folded forms that reflect the foreshore line," he says.

Its location was chosen for several reasons. It is in the hub of the city, but also in the centre of a freeway interchange. 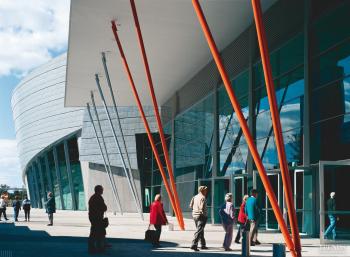 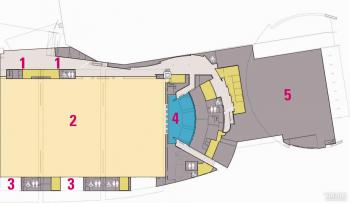 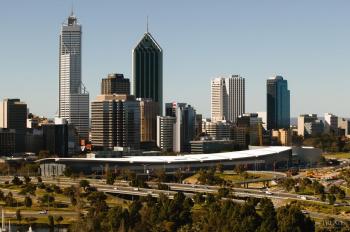 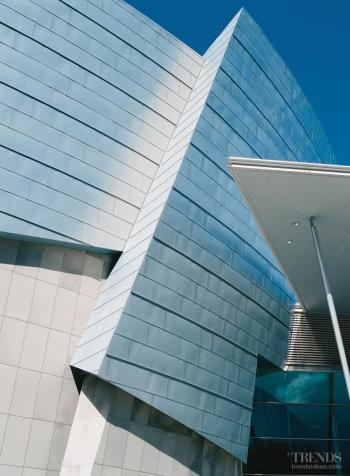 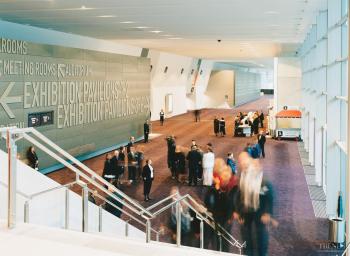 "The traffic interchange area was an under-utilised part of the city, so the new convention and exhibition centre fits in well alongside existing transport facilities."

More importantly, the building provides a stepping stone for future development of the foreshore area. Planning is now under way to build restaurants, cafés, hotels and apartments on the riverside.

"Once this happens, we will not only have satisfied our brief to provide an exhibition centre for the city but, looking at the bigger picture, the foreshore will begin to open up and become better utilised as developments spill over onto it," says Etherington.

In keeping with the unobtrusive design concept, the main building in The Perth Centre is made up of smaller modules so it does not appear as large as it actually is.

For the same reason, building materials were chosen specifically to keep the building looking as inconspicuous as possible.

"Because we had such a huge expanse of roof, the obvious choice was zinc – this material is not highly reflective and ages naturally to a soft grey," says Etherington.

These tones also fitted in with the restrained colours of soft grey, cream and silver, which are found both on the outer cladding of the building and throughout the internal spaces. Inside, most of the spaces are exhibition halls, so they are, in fact, fairly featureless boxes.

"But the volumes in The Perth Centre are so dramatic that visitors are impressed by the scale and size of the halls, even though no attempt has been made to be lavish or extravagant. Such deliberate understatement ensures the exhibition halls are simply a backdrop on which exhibitors are able to make their own mark," says Etherington.

The generously proportioned public spaces, on the other hand, are far more interesting architecturally. As an example, the fully glazed walls in the ballroom function and foyer areas allow visitors to enjoy views over the city.

Meeting rooms are designed to accommodate a wide range of events, and the light-filled ballroom caters for up to 2000 people. If required, however, the glazed walls can be shuttered for special events and with operable walls, the space can be closed up to form several smaller areas.