Many designs may claim to have been influenced by the landscape but most of these still make quite an impact on their surroundings. On occasion, though, a house will slip into its site almost unnoticed, barely making a mark on its environment.

This low impact approach was part of the brief for architect André Hodgskin when he designed a new home on an isolated, wooded site. The well travelled owner was seeking a retreat in the true sense of the word, somewhere to escape to that was designed around the surroundings rather than apart from them. To start with, Hodgskin looked to have a minimal amount of clearance work done, making just enough space in the woods for the structure and an access way.

"With a space cleared that was just big enough for the footprint of the building, steel portals were marched along the site to form the structure of the house," he says.

Finished in the same color as the bark of the trees that mass around the site, the structure is braced at either end by steel stays. The roof has been slung from the framework that is created, and the floor too is supported by this network of steel. Both the roof and floor are solid elements in a house that demonstrates a high degree of transparency.

"The house is a very honest structure," says Hodgskin, "with the details of its form being fully expressed." 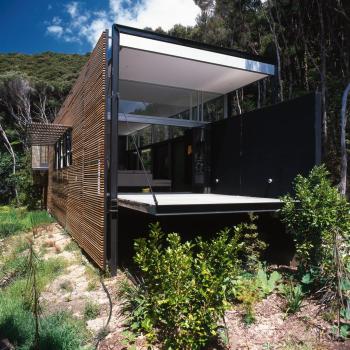 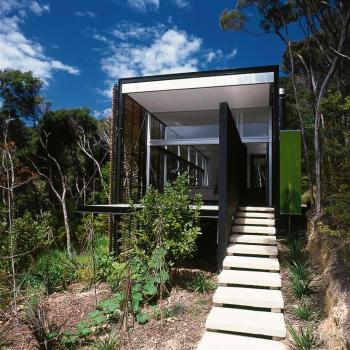 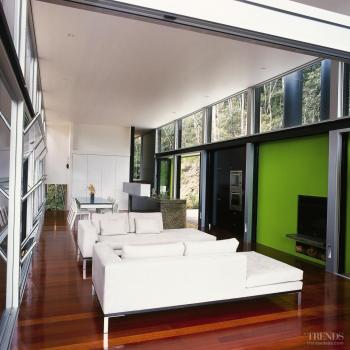 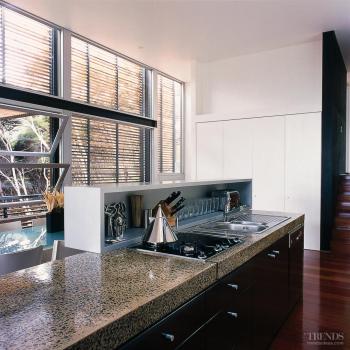 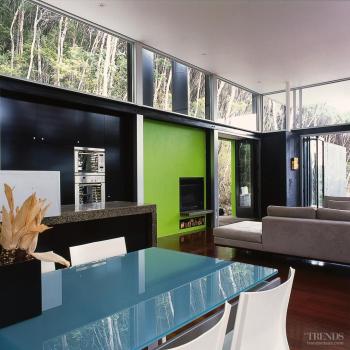 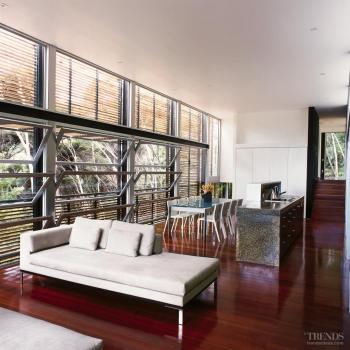 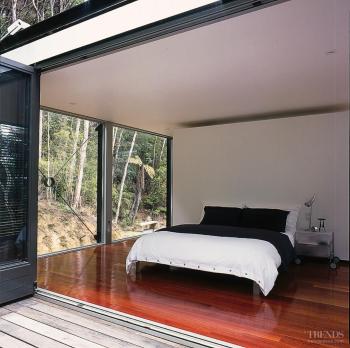 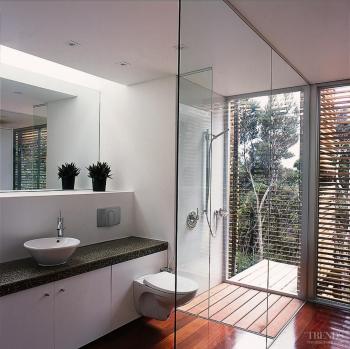 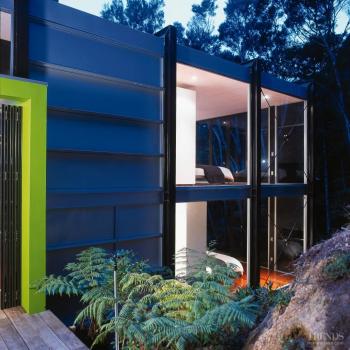 Other surfaces are dominated by glazing ensuring that the interior spaces are as transparent and open to the site as possible. A series of uplights are set into the slim interior columns to provide a gentle ambiant light for the space at night. On one wall, a more solid stretch houses the kitchen appliances and storage, and a fireplace. Known as the seasonal wall, the intention isto re-color the wall inside and out to match thefoliage of the trees through the season changes.

This same wall has a series of sliding doors leading to the exterior deck. Placed on the southern side of the home and contoured to suit the encroaching woods, the deck receives protection from too much sun thanks to the shadow of the house itself. An outdoor fireplace is set into the bold lime-green of the seasonal wall's spring incarnation. Two other decks, effectively extensions of the floor, sit at either end of the home, one by the entrance, the other running out from the mainbedroom. Both are braced by steel.

Opposite the seasonal wall is one constructed entirely of glass and aluminum framing. To provide some degree of shelter from the sun, a lattice screens the open-plan living, kitchen and dining space while still allowing light in and a view out. The lattice also works to cool the air between it and the windows before it enters the house. Set into this lattice is an area Hodgskin refers to as the eyelid. It is a cutout from the lattice, hinged at the top and lifted by more steel stays. This exposes a large chunk of the glazing to precipitate a better view of the woods and the coast in the distance, while the lifted lattice still shades the area from direct sun.

The long run of the open-plan space ends at a set of cupboards, beyond the kitchen area, that conceals a study and other day-to-day trappings. On either side of this hidden study are sets of stairs, leading up to the master bedroom and down to the guest room. These bedroom areas are each divided by a wall of closet space that screens the sleeping areas from the adjoining bathrooms.

The master bathroom features a terrazzo counter, like that in the kitchen, and a shower that can be opened to the great outdoors, while the guest bathroom incorporates a more pragmatic element: the laundry room.