In the coveted, established environment of Cape Cod, any remaining undeveloped lots are likely to be awkward in shape and orientation. However, site constraints such as these can also be a stimulus to architectural invention.

This house overlooks the saltwater Oyster Pond near the tip of Cape Cod. The residence was designed and constructed in the classic shingle style by Polhemus Savery DaSilva Architects Builders, with architect John DaSilva at the helm.

It is rare property becomes available in this area. The owners were lucky, but the location had challenges, says DaSilva.

The owners loved the rambling nature of shingle style architecture and asked DaSilva to create a gracious, casual home in an eclectic version of this style. Shaped in part by the site, the final design offers two quite different faces. 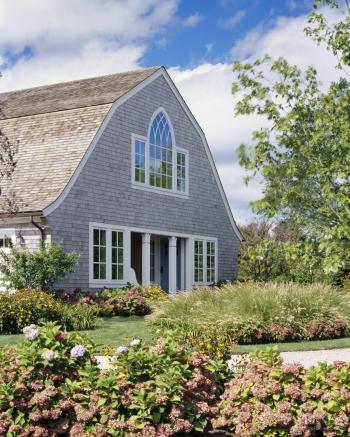 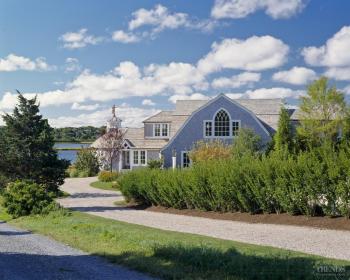 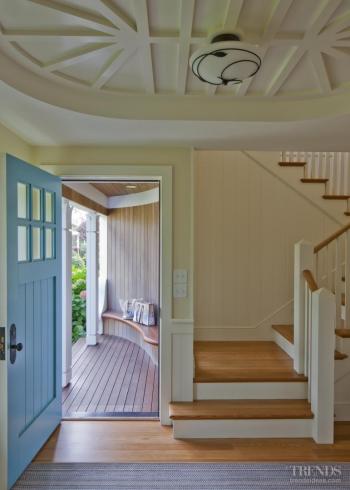 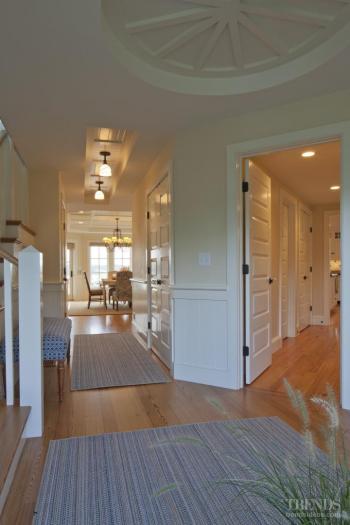 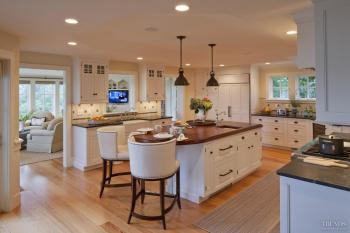 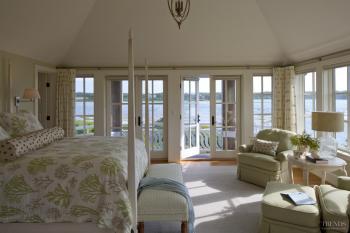 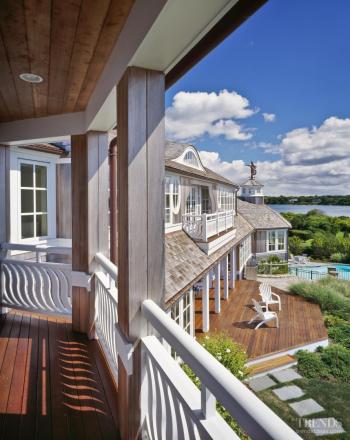 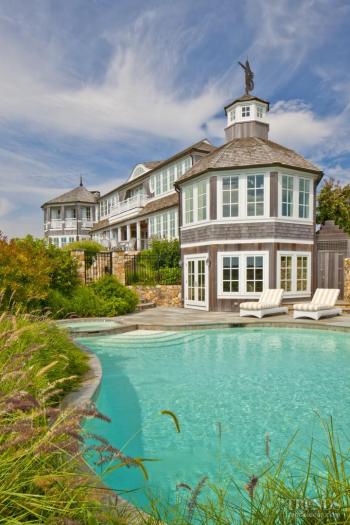 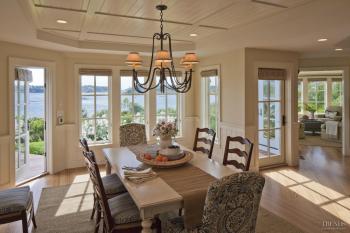 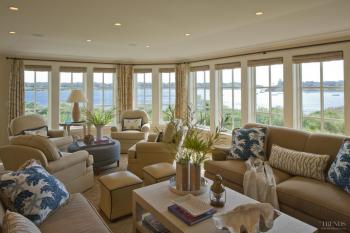 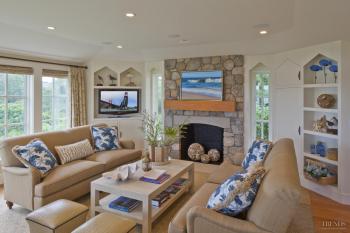 "The central gambrel-roofed portion, with its tall peaked window, faces the apex of the buildable triangle and contains the entry, staircase, garage, mud room and laundry – spaces that don't require a water view," says the architect. "Two wings, set back from the central mass, angle away to fit into the triangle and to rotate the rooms within toward the water views."

"On the waterfront side of the home, the gambrel disappears and becomes a full two-story linear bar connecting the rotated end pavilions and maximizing windows that face the view," says DaSilva. "Both pavilions, or wings, have their own roof shapes and individual character. I cut first and second floor porches into the central bar to gain covered outdoor spaces and add character and variety.

"Essentially, the house offers a vertical character to the street, the tall form and central pillars leading the eye to the front entry. On the other side, the house has a long, low horizontal emphasis, with both wings featuring uninterrupted bands of windows to take in the water views and warmth of the sun."

"The gambrel street facade includes a central window with a peaked arch and a fanlight pattern that is almost a Gothic Revival element. Below this the formal columns are crowned with a simplified leaf cap, a classic architectural device.

"Around the other side of the home, the balustrades have a wave-like pattern and there is also a whimsical mermaid weather vane, standing atop a cupola at the end of one wing. Although these inclusions are not textbook shingle style, this architectural language does provide a broad umbrella that can accommodate eclectic elements."

While the formal entry is signalled by the front porch and columns, the actual front door is to one side of this niche, its asymmetrical location dictated by the internal flow of the home.

On the inside, a custom board and batten ceiling and curved soffit help organize the entry hall and direct the eye down one of two long corridors – the first leading to the service side of the interior, the kitchen, laundry and mud room, and the second leading to the dining room and covered porch straight ahead. A stairway is also directly off the entrance space.

The house is designed for summer living for a family of four, plus older parents who occupy a self-contained apartment in a wing of its own. This has a private entrance with its own character but also enjoys a direct connection into the house and onto the waterfront porch.

Below the apartment is a children's playroom with access to a swimming pool and terrace area. These are nestled into the low point of the site to protect them from the wind.

The wing at the opposite end of the house contains the living room on the ground floor and the master bedroom on the second floor.

In contrast to the historic architectural exteriors, the interiors are contemporary and open plan. DaSilva says traditionally interiors of shingle style residences were darker and felt more enclosed – shored up against adverse coastal weather. The open interiors naturally bring several benefits, affording water views from most areas of the public spaces and flooding natural light through the home. There is even a glimpse from the front door right through the house to the blue saltwater pond.

"We did include some design nods to the architectural style indoors, such as a v-groove raised ceiling over the dining table. This treatment might have been more widespread in a classic interior, on the walls as well as the ceiling."

Heart pine floors throughout the house are another a unifying element. These are in recycled wood as there's no old-growth material left, DaSilva says.