Living on the edge – penthouse atop 1930s building

As the social centre of the home, the modern kitchen is becoming even more integrated into the living space. In this new penthouse, it goes one step further – it is the pièce de résistance, the entertainment centre around which everything else revolves.

The new penthouse is a modern addition to the rooftop of a pre-war solid masonry building opposite Bondi Beach. Architect Kevin Ng of MPRDG says the highly contemporary architecture was designed to make a clear distinction between the new and the old, with the angular geometry of the exterior echoed on the interior.

The irregular, jointed composite steel ceiling panels, for example, mimic the white Alucobond cladding. And the angled sides of the fireplace and waterfall end of the kitchen island repeat a theme evident on the exterior.

"We have also integrated the rear of the kitchen with the rest of the apartment," says Ng. "The high-gloss cabinets are sleek, white panels just like the curved, white composite steel walls that wrap around the entry and main circulation spine," Ng says.

A chunky Calacatta marble island benchtop introduces pattern to the mix. The architect says the marble slabs were carefully bookmatched to provide seamless joins. With mirrored panels on the front and side of the island rendering the base almost invisible, the marble benchtop appears to float within the space. 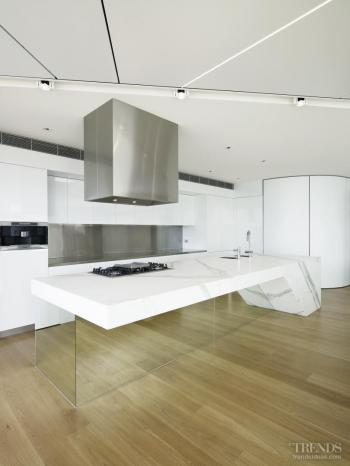 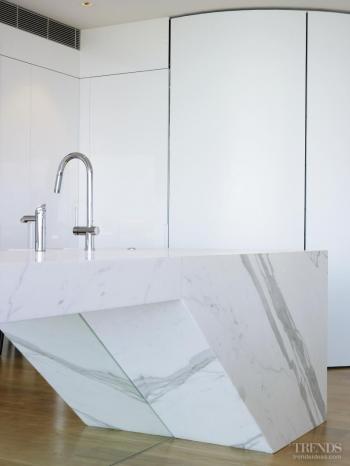 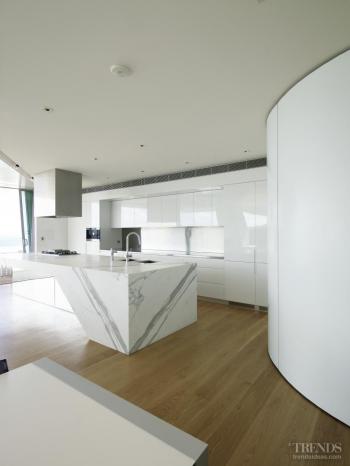 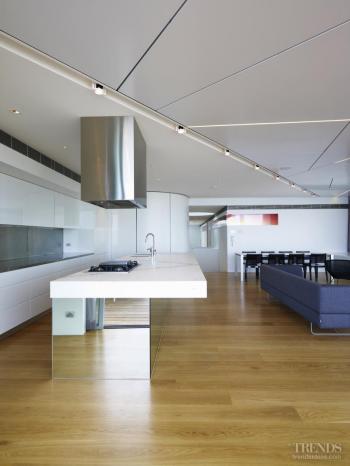 The perimeter benchtop, splashback and Qasair hood are in stainless steel, which also has a reflective quality.

"We positioned the sink and the cooktop on the island so the owners could enjoy the spectacular views while working in the kitchen,"says Ng. "But this meant we couldn't conceal the ventilation within the cabinetry.

"The Qasair hood is a very large, suspended rectilinear box that's in keeping with the minimal lines of the rest of the apartment. It continues the strong, sculptural look of the island."

Where possible, appliances are integrated into the cabinetry, so they are not an intrusive element in the living area. And cabinets and drawers have touch openings and recessed pulls, so there is no obvious hardware.

In addition to the storage provided within the kitchen, there is a large walk-in pantry behind the wall nearest the large sliding door to the rooftop terrace.