The first timber high-rise in Australia – Forté by Lend Lease

Significant architectural leaps can sometimes come from the search for a simple design solution.

"Lend Lease was expanding the Victoria Harbour project out along the peninsula and poor ground conditions required a rethink of traditional concrete options. Our work on the Athletes Village for the London Olympic Games had encompassed the possibility of using Cross Laminated Timber (CLT). While time imperatives meant this structural approach could not be fully explored there, we advanced the research on using this eco-friendly construction material back here in Australia. Several of our completed and partly constructed buildings were diagnostically remodelled on paper considering CLT instead of concrete. There were several pluses and no negatives, so the decision was made to build Forté in CLT – an exciting development for this kind of tower construction in Australia."

While revolutionary in Australia, CLT has been in use in Europe for more than a decade. Using innovative technology, timber panels are stacked at right angles and bonded together over their entire surface and then hydraulically pressed. The result is a mass timber product engineered for strength – a viable construction material alternative that can withstand similar loads to prefabricated concrete, but at a fraction of the weight.

"The material offers many more advantages besides the lightness needed to build on the less-than-ideal bedrock on the peninsula," says Patterson. "Two major benefits are speed and safety of construction. The CLT panels are prefabricated in the factory, trucked to site, craned into place and then fixed together with large screws. In addition, each panel is a load-bearing element, acting as a structural diaphragm rather than as posts and beams. This allowed Forté to be built in the platform construction system, with CLT providing the walls and the floorplates. Only the ground level is in concrete for base stability. 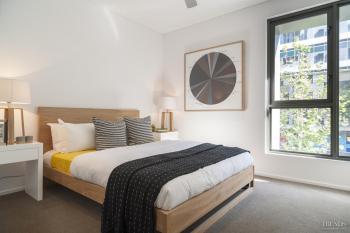 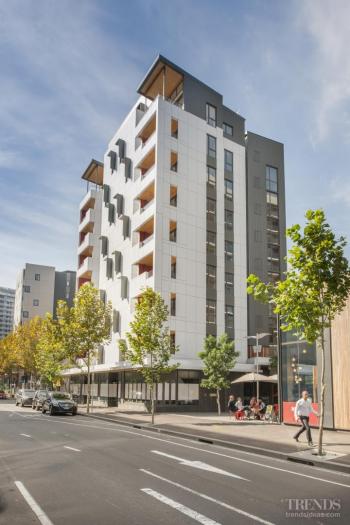 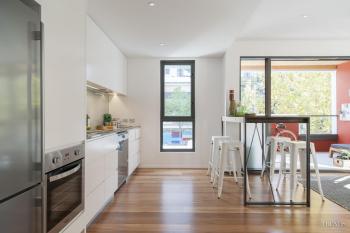 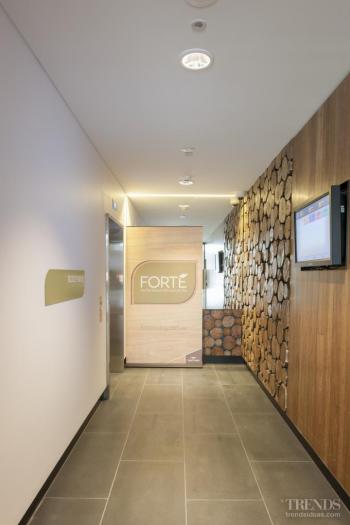 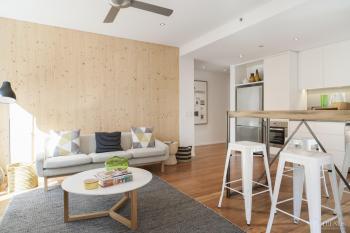 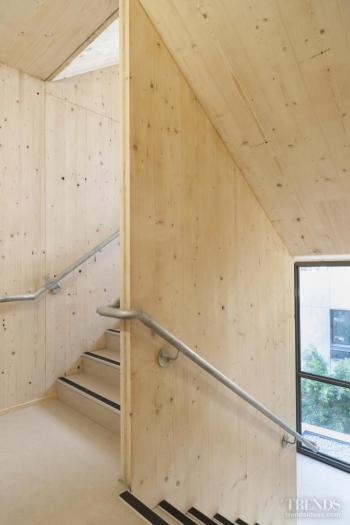 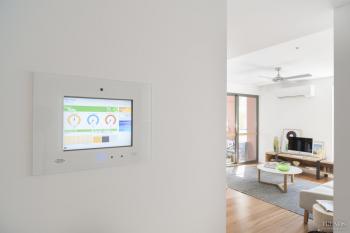 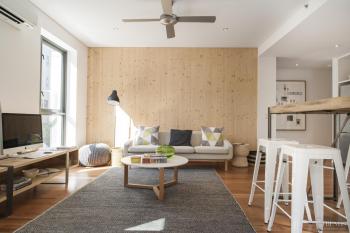 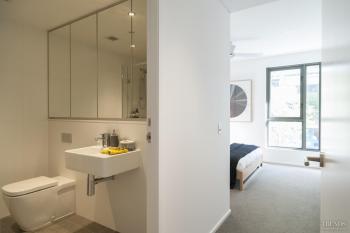 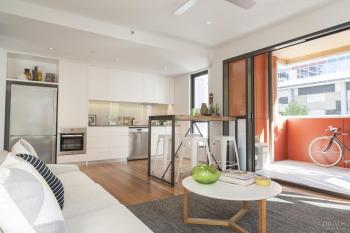 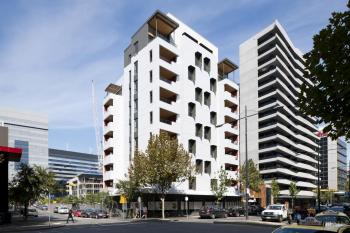 "Advantages of this type of construction include fewer people on site, no hot works such as the welding and grinding in a traditional concrete and steel build, and so none of the attendant dangers and noise. Similarly, as all the Forté bathrooms were created as prefinished units, brought to site intact, there was no requirement for wet trades on site – a tricky part of the process that can hold up other stages. All these pluses made the construction process faster, quieter and safer, and generally lessened the impact on immediate neighbours."

The list of advantages of this engineered timber product goes on. CLT is VOC free, and is made from an eminently renewable resource, one that acts as a natural carbon sink.

"Forté reduced CO2 equivalent emissions by more than 1600 tonnes when compared to a concrete and steel build – equivalent to removing over 400 cars from our roads," Patterson says.

The building's design, as well as its construction and use of materials, offers further green kudos. The varied forms of Forté were shaped by a number of considerations. These included ensuring two-way views from each apartment's corner living spaces, and the optimisation of sunlight penetration into a small park at the rear of the building.

All these environmentally friendly factors, as well as low-VOC interior finishes, have enabled Lend Lease to apply for certification as the first 5-Star Green Star As Built residential building in Australia.

"The inherent, uniform strength of CLT does allow for dramatic architectural feats. For example, a push of a button on AutoCAD can move windows at the design stage with no effect on overall structural integrity, or cost," says Patterson. "Similarly, the integrity and lightness of the material allows for a fresh architectural vocabulary, including extreme cantilevered elements.

"However, Forté was designed along relatively conservative lines. As the building is a potential vanguard for Lend Lease for this construction style in Australia, we wanted buyers to consider a green home environment option without the need to buy into avant-garde architectural design forms at the same time."