Achieving a restful atmosphere is often a key focus when renovating an urban apartment. Maximizing natural light and bringing a sense of spaciousness are two ways to achieve this.

Both these elements were closely considered when Rios Clementi Hale Studios was asked to rethink this inner-city dwelling, says principal architect on the project Mark Rios.

"The space was converted from a three-bedroom unit into a two-bedroom apartment – and further reconfigured to increase natural light and make the interior feel more voluminous.

"To achieve an open look, we eliminated the living room walls and maximized ceiling heights, allowing ample sunlight to flow through the 3100sq ft apartment.

"While stretching the ceiling height, we also had to accommodate in-ceiling services," says Rios. "The most effective way to assimilate these was to let them form part of an asymmetrical sculptural rhythm – in a sense, hiding them in plain sight." 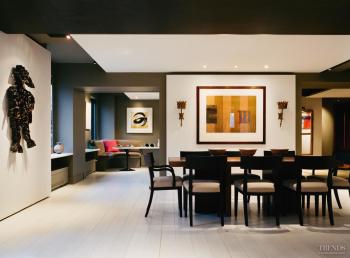 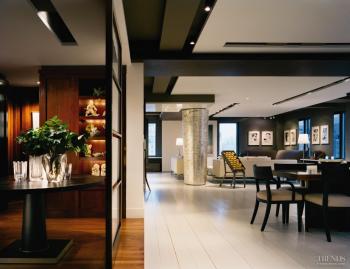 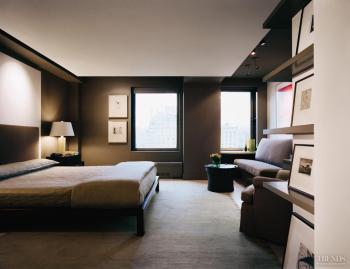 In a similar way, a structural support column has been concealed within a silver-leafed oval shape that widens as it ascends.

"The upwards expansion of this form adds to the apartment's feeling of loftiness," says Rios.

As well as openness and sunlight, the architect paid close attention to proportion and balance.

While the building's exterior walls have several punctured openings, Rios was careful not to let these irregular window spaces dominate the interior. Instead, wall panels were designed to "float" in front of the apartment walls. Their prominent positioning counters the visual priority that light-filled windows would naturally take.

As well as contributing to a subtle balance, the panels provide standout settings for the client's eclectic mix of contemporary art and antiques.

"While asymmetrical, many of the apartment's elements provide a sense of direction to the space," says Rios. "Ceiling channels, for example, conceal lighting and direct the eye to a particular view or piece of artwork. The silver column breaks up the greater space and also directs the eye back through the open-plan interior from the main seating area. Even the white-washed hickory floor boards reinforce the length of the space."

Benches and banquettes ring the apartment walls, adding texture and depth to the open space.

A bronze and glass wall separates the dining area from the library, which features traditional hardwood floors and built-in bookshelves.

Much of the furniture – including the banquette seating, living room rug, some tables and even some plates – was designed by Rios Clementi Hale Studios.

"Throughout this apartment, shapes balance shapes, tones balance tones and receding elements are off-set by prominent ones," says the architect. "As with many things, an overall appearance of simplicity is achieved by a great deal of attention to detail."