Fortress-style stone walls anchor this house to the land, while its soaring glass forms open up to the tree canopy

Residential architecture is often a response to the surrounding landscape. This house takes that concept one step further – it was designed as a topographical form in its own right.

Architect David Jameson says the owners had two key requirements – they wanted an architecturally interesting house, and they wanted to be able to view the full height of the trees, as if from a distance. Consequently, the house, which comprises three distinct volumes, has a particularly close relationship with the site. Positioned beside a stream that bisects a wooded site, the house was designed to unveil the entire treescape.

"The two stone wings act as walls within the landscape," Jameson says. "They are heavy, static forms firmly anchored to the ground. A crystalline glass prism between these solid volumes forms the central pavilion. The juxtaposition of heavy and light elements is a defining aspect of the design."

The layered roofs are also a response to the topography, says Jameson.

"The roof planes were conceived as conceptual extensions of the undulating landscape – they create their own topographical form. In addition, inverting the gables of the butterfly roofs was a way to open up the interior spaces to bring the picturesque tree canopy into view." 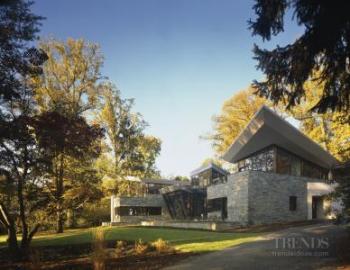 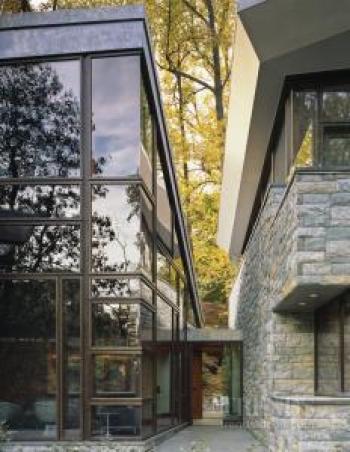 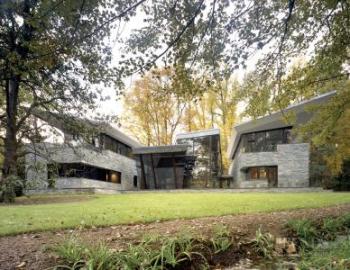 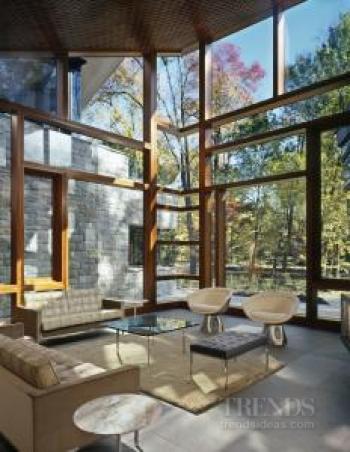 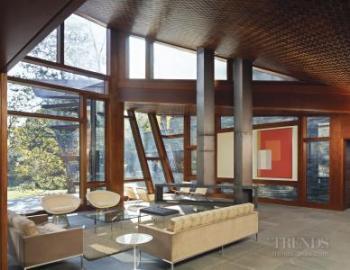 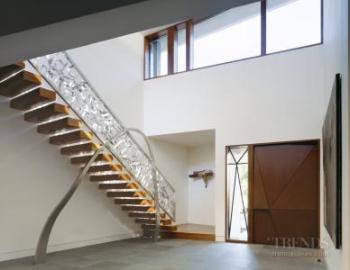 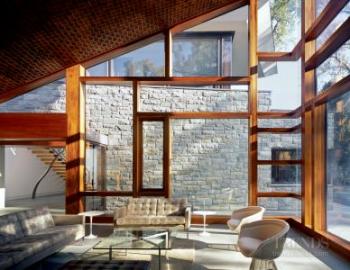 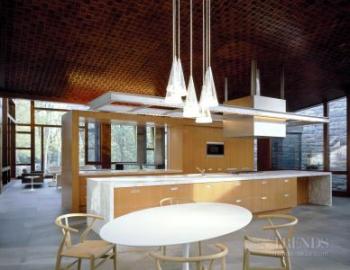 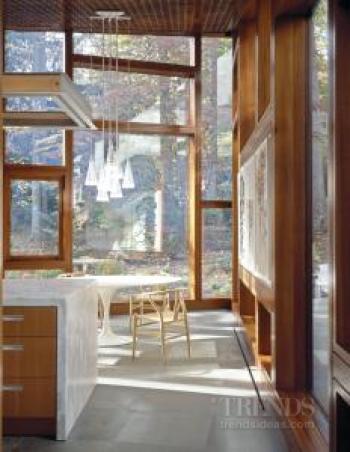 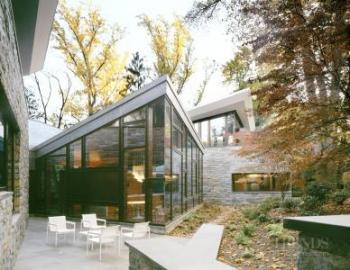 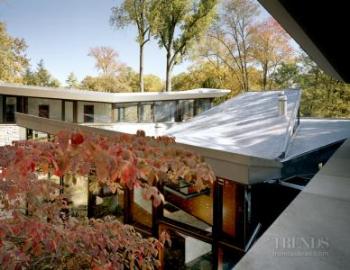 The cantilevered roofs, which rise to more than 30ft, provide deep overhangs that shelter second-floor terraces while still allowing large amounts of natural light inside. Similarly, the stone walls act as sunscreens for the central glass pavilion.

The walls feature carderock stone, quarried just two miles from the site. Jameson says where possible, materials were sourced locally – the carderock stone is indigenous to the Potomac River valley.

"We specified extra-large blocks that have a taut linear quality. These create a tectonic wall – the mortar joints are virtually invisible."

Slot windows in the walls, some of which are recessed, enhance the fortress look of the base and ensure the stone remains the dominant material.

The separate volumes that define the house also determine its internal organization. The north wing on the right side accommodates the entry, library and guest suites, while the south wing houses the master suite, offices and exercise room. The central glass pavilion contains the more public spaces, including the open-plan living areas and kitchen.

Jameson says he deliberately lowered the scale of the entrance, which is just 9ft high, to provide a dramatic contrast to the soaring 24ft living area.

"Upon entering the central glass volume, you can see how the roof explodes into the landscape, allowing you to view the trees right up to the canopy. The glass walls visually disappear and one reads the stone walls beyond as the exterior threshold – the space grows exponentially. It is almost as though the glass walls are not there, such is the illusion of being outside."

Jameson says the two different roof lines within the central pavilion add to the visual tension.

"Folding the roof to a lower scale in the informal living area, and bending the glass outwards, allows the landscape to be experienced in a different way, and at a different scale."

Further visual interest, and warmth, is provided by the 1820sq ft acoustic ceiling, which comprises thousands of small square blocks of African ribbon mahogany – a wood that also frames the inside of the doors and windows.

The kitchen, however, features clear vertical-grain Douglas fir, which Jameson says is more organic, and was chosen to help ground the house within the wider landscape.

The cabinetry also has a strong sculptural presence, in keeping with the gallery-like ambiance.

"It is less about being a kitchen and more about being an art object – neither the 20ft-long island nor the storage cabinets touch the walls or ceiling," says Jameson.

The kitchen's square, linear quality is enhanced by the sculptural overhead lighting bracket, which also accommodates a cube-shaped custom hood.