When the big boys move in, you can be sure a run-down precinct will gain a whole new status. In this case, it was a major anchor tenant for a new development in a neglected corner of the Sydney CBD that turned heads.

Liberty Place, the new home for the ANZ head office in Sydney and Herbert Smith Freehills, has transformed an area between Castlereagh St and Pitt St, and simultaneously redefined the city skyline with a distinctive new tower block.

Project architect Sean McPeake of Francis-Jones Morehen Thorp (FJMT) says right from the outset developer Grocon wanted the focus to be on the sustainable redevelopment of the entire precinct.

"This was a rather run-down part of the city with a collection of low-rise, nondescript buildings and the heritage-listed Legion House – a YWCA hostel in the early part of the last century – and the former Angus & Sons Building, which needed to be demolished.

"While the new tower was always going to be an iconic reference point, the vision for Liberty Place also demanded a revitalised light-filled laneway and the introduction of retail and hospitality premises that would animate the entire precinct. The redevelopment needed to create a through-site link, and a significant entry to the tower from Castlereagh St. The tower itself required an internal pedestrian street that would connect through to the Pitt St entry." 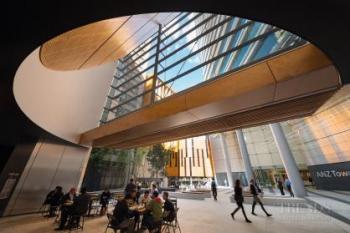 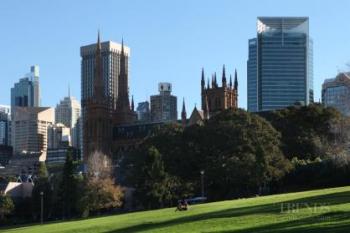 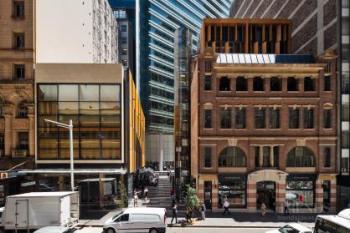 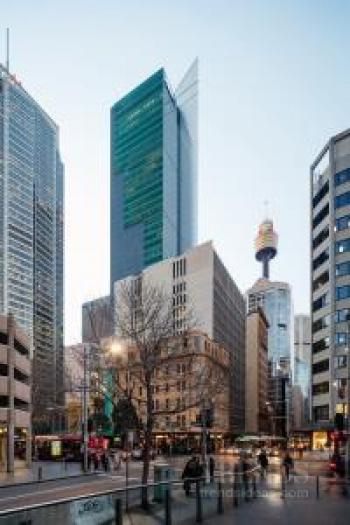 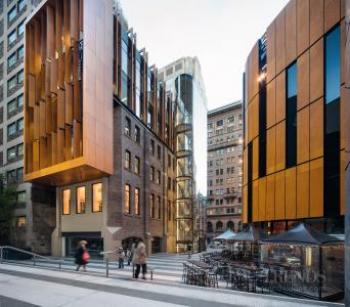 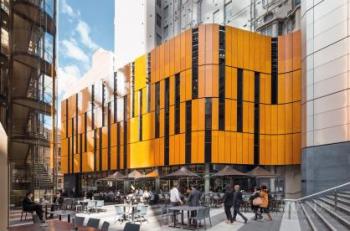 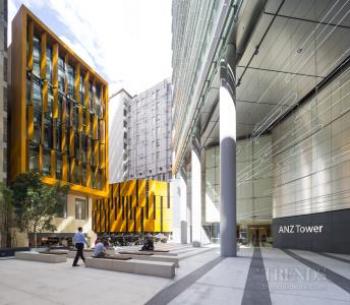 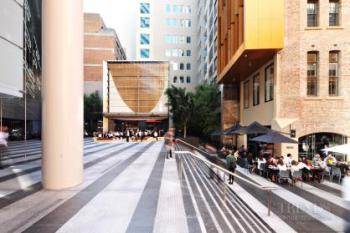 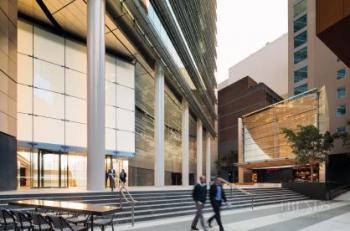 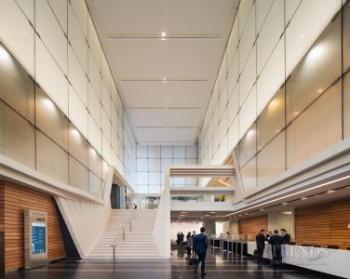 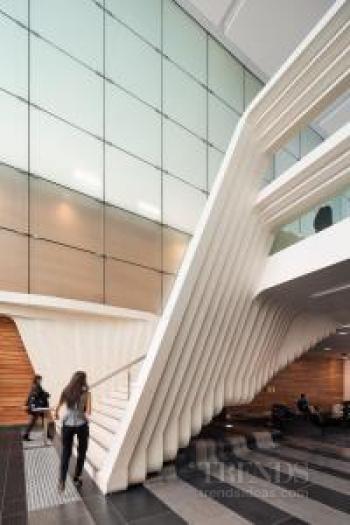 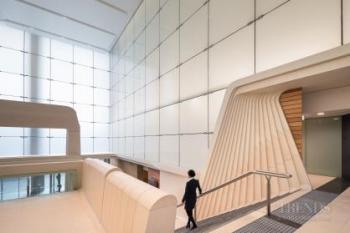 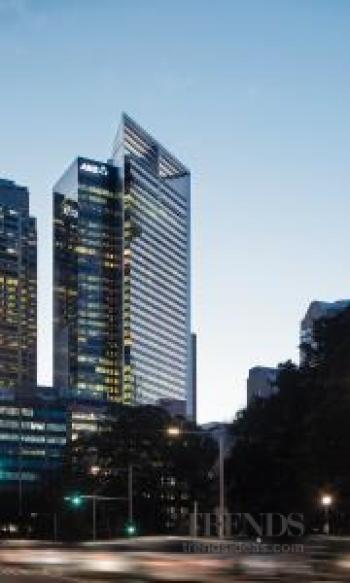 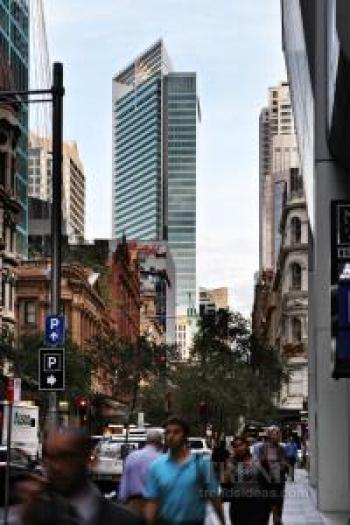 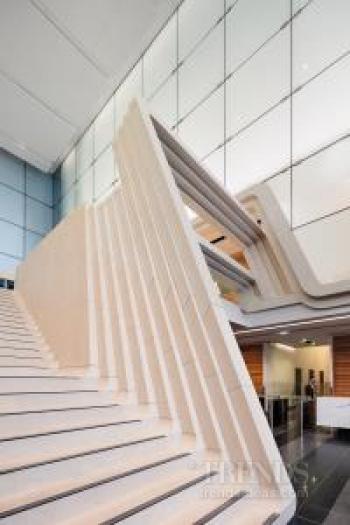 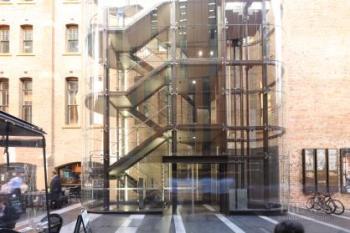 Legion House, which fronts Castlereagh St at the beginning of the laneway, was refurbished and extended upwards and outwards, while the historic street elevation was preserved. To maximise the relatively small floorplates, the stairs and lifts were moved to the outside of the building.

"We chose to express the vertical circulation by enclosing these elements with a curved glass screen," says McPeake. "This acts as a signpost to the bigger development at the end of the lane."

A cantilevered extension at the rear of Legion House is clad in durable composite timber panels with large vertical louvres. The timber helps to warm the space visually and continues a materiality introduced on the building on the opposite side of the laneway.

"With its exposed stairs, Legion House is the more articulated side of the lane," the architect says. "The facade of the office building opposite offers a simplified rhythm of windows that is a quiet foil to the more complex shapes of the windows in the heritage structure.

"The newer building has a sinuous curve at the end, where it splays out to slip in behind the sharp fin of the tower. This leads the eye directly to the tower and the grand entry."

Retail and hospitality premises enliven the street level of the plaza that opens up before the tower. Timber also features here, on a third building, which was designed to conceal the uninspiring rear facades of the buildings behind.

"Those existing buildings were uncovered in the process of redeveloping the precinct, but the facades were never meant to be seen," says McPeake. "So the new building is quite high, with a strong focal point that mimics the top of the tower. A large semi-circular drum ceiling in slotted plywood sits behind a glazed facade. Positioned directly above retail spaces, the drum helps with acoustic insulation. There is also a steel-framed glass canopy with timber battens on the underside, that increases the undercover seating area."

Alternating bands of light and dark granite paving, which begin at the start of the laneway, continue right up the steps and into the foyer of the ANZ Tower, creating a seamless transition.

The grandeur of the entry is reinforced by a 16m-high glazed atrium featuring suspended walls of translucent glass. The glass panels are fixed by an innovative system of high-tension stainless steel cables and custom patch fittings.

"The glass walls create a significant and dramatic interior," says McPeake. "On the inside, the walls are illuminated by an advanced system of LED backlighting. A suspended white ceiling appears to float within the atrium, completing the architectural expression of an enclosing box."

Rectilinear and sculptural elements also define and organise the space.

"The design needed to resolve a number of conflicting requirements, including level changes between the two street entries," the architect says. "Easy access was critical, and there were differing tenant requirements for security control. We chose to extend the white limestone floor of the upper level, folding this down to create a dramatic staircase that is expressed as a major sculptural element in the foyer. The form of the stair extends upward to join with a curving, ribbon bulkhead that wraps over the entry doors at each end. The result is a sculpturally refined space that functionally supports both the office workers and the pedestrian traffic that frequents the through-site link."

The tower itself is a rich interplay of three architectural forms, including the sharp fin element that rises from the Liberty Place plaza to the roof. The framed volume on the primary elevation orients the tower to Sydney Harbour. This elevation is also defined by a curved rooftop feature with large Alucobond louvres that reflect different patterns of sunlight at different times of the day.

The glazing on another elevation has a stepped form that articulates the levels to which the lift banks rise – there are fewer lifts to the upper levels, which consequently have greater floor areas.

Sustainability is another key feature of the project – the tower is the largest building in New South Wales to achieve a 6 Star Green Office Design v2 rating from the Green Building Council of Australia. Even the heritage building benefits, says McPeake.

"Legion House receives little sun or wind making these unsuitable as renewable energy sources. Instead, the building receives its energy from a process called biomass gasification."

Legion House utilises the commercial paper waste generated from the ANZ tower. This is shredded and compressed to form paper briquettes, which are used in the gasification plant to produce Syngas.

"This is effectively a carbon-zero energy source as the greenhouse gases released in the energy production equal that absorbed in creating the biomass," the architect says.

Other sustainability measures at Liberty Place include two 450kW tri-generation plants that generate electricity, heating and cooling for the air conditioning, hot water systems and high-efficiency chillers. The building also has an active chilled-beam perimeter zone with low temperature VAV central zone, a high-performance thermally shielded glass exterior, rainwater harvesting, scheduled lighting to reduce power consumption, and external sun sensors and automated blinds for glare control. And to ensure a comfortable work environment, the introduction of outside air is 150% of the ventilation rate required by Australian standards.