Let there be light

Once a gloomy house lacking outdoor flow, this villa's transformation has let the sun in, and provided an open-plan space that adds a heart to the home

Let there be light Discover this article's resources 0

Many architectural features can add impact to the overall aesthetic of a house. When rooms are small and dark, however, often a primary aspect of the initial design is to create flow and let in the light.

The architect of this suburban villa was asked to re-design the existing layout, which was lacking in both space and light, to create a new kitchen adjoining an open-plan dining and living area. The clients, Karen and Martin Rigby, also wanted to achieve an indoor-outdoor flow from the living room, with easy access to the garden for their small children.

Designer Mark Marinovich, of John Mills Architects, says the project presented several challenges, one of them being the proximity of the neighbouring house.

"The villa is tucked up very close to the neighbour's property on the north-facing side, which meant much of this area lacked light and privacy," he says.

"The solution was to move the kitchen into the dining room, and to rotate the peninsula by 90°. With the walls removed, it created an open-plan kitchen, living and dining area." 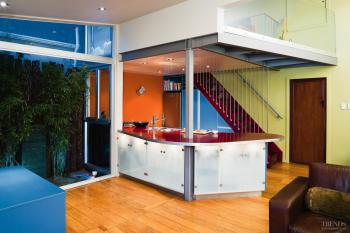 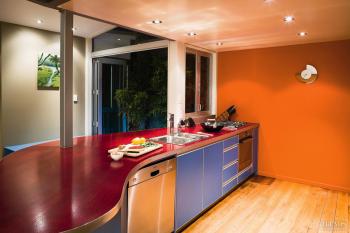 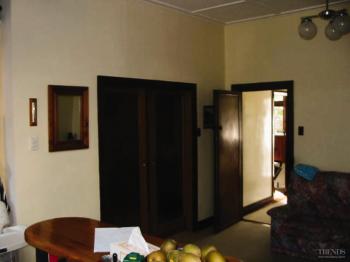 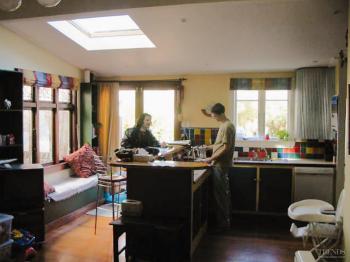 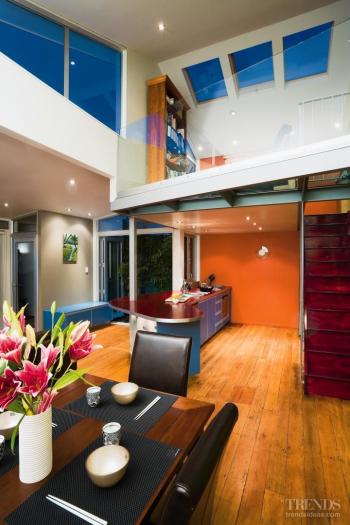 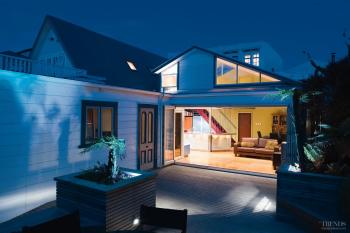 Given free reign to select the colour palette, Marinovich chose shades of blue and mauve in the kitchen, with a fire-orange feature wall. A rosewood stain adds a deep, berry-like glow to the benchtop and stairs, and an avocado-green wall is a backdrop in the living room.

The dishwasher, sink and gas hob are positioned galley style on the peninsula, while the pantry, fridge, book shelf and wine rack are built in under the stairs on the back wall. On the opposite side of the peninsula, opaque cupboard doors conceal backlit shelving that the owners use to store crockery and glasses.

To screen the neighbour's back door area, Marinovich created a narrow garden outside, incorporating a running water feature and planted with bamboo and ponga. A window over the hob in the kitchen allows the Rigbys a little green tranquillity while cooking.

Bifold doors connect the garden to the space in front of the kitchen peninsula, where a built-in seat, with deep drawers underneath, doubles as extra storage.

Behind the seat, the existing bathroom was renovated and a window installed to provide a leafy view for bathers.

The clients also requested a separate study and, with floor space at a premium, Marinovich designed it above the new kitchen area, running the staircase up the rear wall of the kitchen.

"Building the study upstairs allowed us to bring much more light into the house with the use of a window right up at the roof line over the living room, and skylights in the study ceiling."

A trapezoid-shaped strip of glass flooring overhangs the kitchen, and is both a design feature and a solution to letting more light into the area.

"The owners wanted to keep some aspects of the original villa, such as the wood flooring and the existing doors. It shows we can renovate a circa-1900 house without forgetting its roots."

Karen Rigby says the lack of northerly sun meant the house, particularly the living room, had a permanently gloomy feel.

"We felt there was a lot of dead space that, as a family, we didn't use. We wanted to open up the heart of the house, and get some indoor-outdoor flow."

Wide bifolding doors from the living area open onto a new deck, where before there was a narrow strip of concrete in the garden and steep stairs as the only access.

Built-in planter boxes and seating add a room-like feel to the outdoor entertaining space, she says, and a ramp was added between the deck and garden for the kids.

While not being brave enough to choose such paint colours herself, Rigby says she is pleased the designer was bold in his choices.

"The new design is everything we hoped for. We thoroughly enjoy living in such a light and bright space, and feel this is now very much a family home with heart."