With its engaging facade, open floorplates and 5 Star Green Star rating, the new Melbourne office for the Australian Institute of Architects sets an appropriate benchmark for commercial building design

There was a lot of interest in what was proposed for this prime corner building site in the heart of Melbourne. And it's scarcely surprising – the site at 41 Exhibition Street was owned by the Australian Institute of Architects, which was looking to develop a new commercial building.

Architect Adrian Stanic of Lyons, the firm that won a competition to design 41X, as it is known, says the word "exemplar" was used a lot during the design phase.

"The institute was looking to create a benchmark office building that would achieve architectural excellence with a commercial performance to match," Stanic says. "In addition, it became increasingly clear as the design evolved, that the building could set a precedent for sustainability."

Institute president Paul Berkemeier says that not only was the institute wanting to set serious design benchmarks, but the development also needed to be a prudent investment that would stand the institute in good financial stead for many years to come.

However, at 330m2, the size of the site was a challenge for the design team. Stanic says compared to other city blocks, it is a postage stamp. 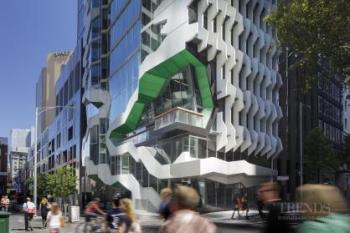 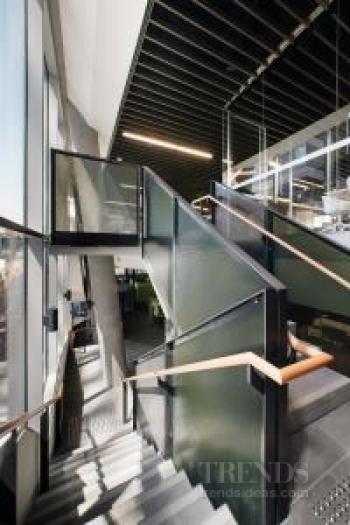 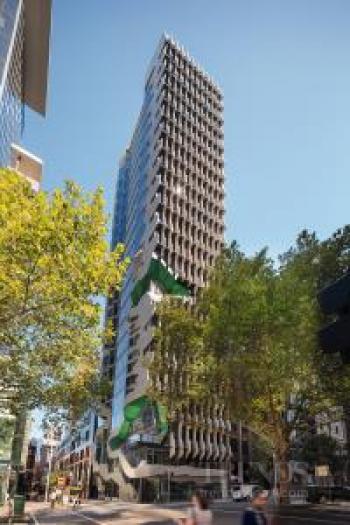 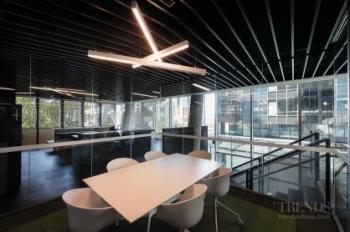 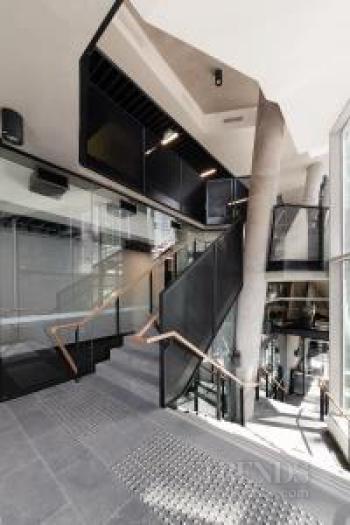 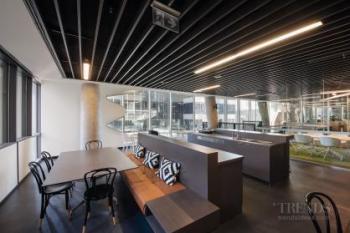 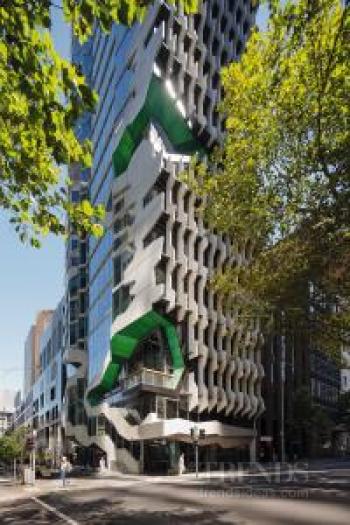 "But it is a premium location amid a lot of solid stone and concrete commercial buildings, and in a precinct close to prominent public heritage buildings, such as Parliament House. We chose to reference this typology in the materials and form, but in an abstract way. Cost considerations meant we couldn't build in stone, so we chose concrete."

The architect says the design of the building was subsequently conceptualised as a large, solid block, with large pieces carved away to reveal the programme behind.

"The glass and concrete create a simultaneous sense of heaviness and transparency. The institute wanted the building to engage with the public – it was important that this wasn't seen as a purely commercial building. It needed to have a human scale that would reflect the institute's desire to be connected both to its members and the public. The carved, sculpted form of the building facilitates this openness with the street – on the corner of the building, for example, there is a clear view of the open stairway within the institute tenancy."

Stanic says the design strategy was to ensure openness of the entry lobby to the corner, so it would become contiguous with the street.

The tower itself features a series of precast concrete fins that relate to the performance of the building. The fins provide passive sun control, screening the sun in the early morning and evening. Yet their tapered profiles ensure the expansive views can still be enjoyed from inside.

"The concrete blades recreate a chiselled face to the exhibition street frontage, like a sculptor's block that's ready to be carved," says the architect. "When they are viewed obliquely, they appear to join up as a solid masonry face, with a rough, textural surface."

Stanic says the ribbon-like green anodised aluminium on the faceted carved areas references the sustainability initiatives – the building has a 5 Star Green Star rating and a 5 Star NABERS energy base building rating.

To maximise the floorplates, the building core is off to one side, and heavily engineered to compress the space required. For example, two stairs occupy one shaft in a scissor-stair arrangement, and the need for a pressurisation shaft was avoided by having a fan intake system on the facade that supplies fresh air directly to the stairwell.

Stanic says the size of the floorplates makes the building unique in the Melbourne city market.

"It enables owners or occupiers to create their own identity on an entire floor that has a relatively small footprint. This creates a distinctive vertical business community on this city corner."

The building is designed to be carbon neutral within 30 years – the savings made in that time will offset the energy used to construct the building, taking all elements into account.

Berkemeier says the institute embraced this approach, developing a sustainability charter for the building which is believed to be the first of its kind in the office market.

"The charter binds owners and tenants to the sustainability agenda for the building to monitor and, where needed, change behaviours. On an annual basis, the measured operational carbon footprint of the building's tenants will be independently assessed. Combined with the quantified embodied carbon of the physical building, the operational carbon will be offset annually."