Remodelling your outdated kitchen will bring modern functionality to the heart of the family home. However, it can offer another important advantage, too – the chance to consolidate and extend the architectural emphasis of the house.

On this project, the owners appreciated the setting of their hilltop suburban home, but had renovated in a style typically found thousands of miles away. One owner had attended university on the East Coast of the United States and had fallen in love with traditional Cape Cod architecture.

Now, with two young children, they wanted to replace the small, dark existing kitchen with a larger space that would meet the needs of their growing family, says architect Daniel Strening.

"We completely rebuilt the rear to introduce an open and airy kitchen – one that connected well to adjacent living spaces and opened onto the back deck via French doors.

"I designed the remodel to continue the New England style – the kitchen has transitional cabinets, a raked beadboard ceiling, nautical-style pendant lights and a white palette that is typical of this look. Exposed trusses bring drama to the space, accentuate the high ceiling and help give the kitchen an hierarchical prominence in the home," says Strening. "Although the kitchen reflects a Cape Cod aesthetic it has a greater sense of refinement. For example, the cross beams feature light detailing." 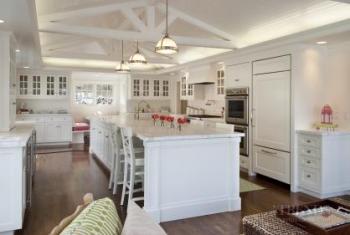 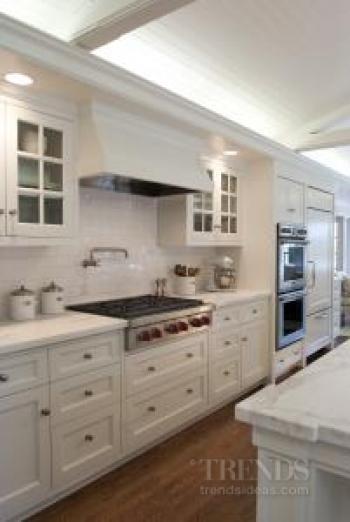 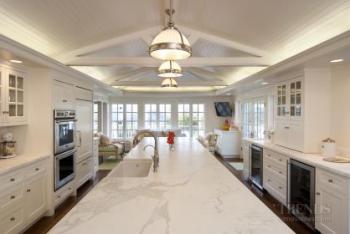 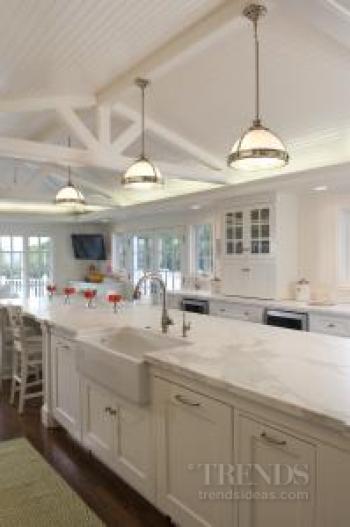 Cove lighting, on dimmers, can change the mood of the environment from entertaining to intimate in a second, while the uplighting also enhances both the board ceiling and beamwork.

Despite the scale of the space, the kitchen has been laid out so the cook doesn't have to expend energy just getting around. Each area has its focus. Ovens, sink and refrigerator are grouped on one side, while platter storage and an undercounter wine refrigerator are set on the other, more public, side of the workspace.