It's fair to say that domestic architecture has really lightened up over recent decades – rooms have switched from oppressive to open-plan, while windows have evolved into full-height glass panels. This kitchen and its adjacent areas within a 1980s home are a case in point. Lead interior designer and associate at Hillam Architects Hollie Raymond-Baker says the reworked kitchen was part a of wider upgrade of the home.

"The owners wanted an open-plan dining, kitchen and connected living space that looked out to the outdoor entertaining area to the rear of the site," says Raymond-Baker. "However, we had to be respectful of the form of the home while adapting the plan for 21st century living."

Replacing the cramped, under-considered existing kitchen, the new version is open to the dining area and views. A blackbutt wall-sized door pulls back so the living room beyond can also connect to the kitchen and this outlook.

As part of the drive to ensure the kitchen didn't detract from the scenery, the kitchen has clean, minimalist lines and integrated elements. A television in the cabinetry beside the bar area can be hidden by pivot sliding doors while the kitchen's two large fridges are integrated just round the corner in the same bank of cabinetry. For the same reason, the long custom rangehood is also concealed within the upper perimeter cabinetry. With so much hidden away, the dark cabinetry and contrasting white stone counters take on an almost furniture-like appeal.

However, not everything is understated. The curving splashback is in white marble mosaic tile, contrasting the dark veneer. 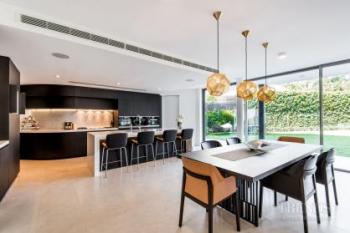 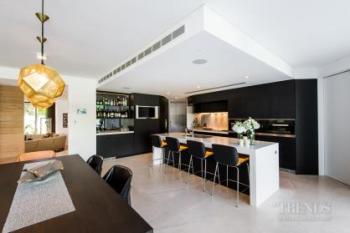 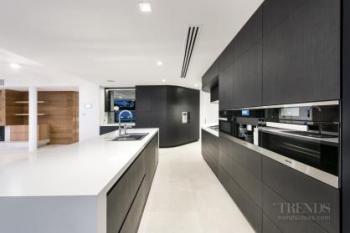 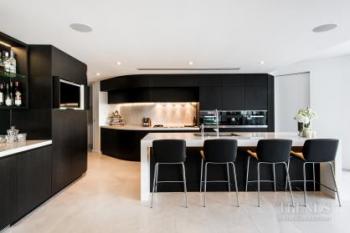 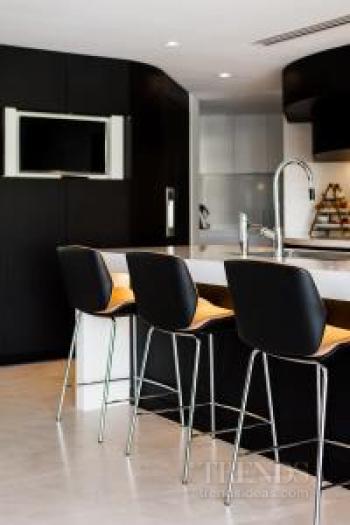 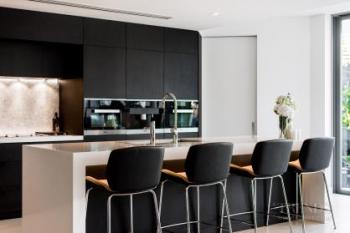 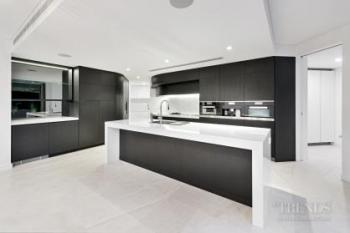 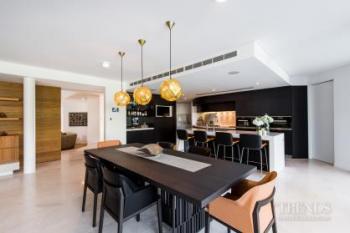 The island has a broad overhang and stools, making it a social gathering point and breakfast area. The bar helps connect the design with the wider space while the dropped ceiling contains localised services and defines the kitchen. An existing powder room to the rear was reworked as a scullery with storage and prep surfaces, helping keep the on-show kitchen clutter-free.

Set around the corner from the kitchen, the scullery has white cabinetry and the same white engineered benchtops as the kitchen. Positioning the two substantial fridges in the connecting cabinetry means they are equally handy to both the kitchen and the scullery. The white door at the other corner of the kitchen opens to a study.

"Generous use of wood, stone and glass, gives the space warmth and elegance," says the designer.