Promotion by great example is a phrase that comes to mind when looking at the development, star location, building design, tenant fit-out and green credentials for the EY Centre – a recent stand-out addition to the Sydney city skyline.

Senior development manager at Mirvac David Chan says the high-profile location was a key factor in the premium tower's development. In particular it provided the ideal address for Mirvac's own head office running over six floors two-thirds of the way up the 37-storey building.

"With sitelines to the harbour and bridge and the ability to activate the ground level and surrounding laneways with diverse F&B outlets, public art and leisure spaces, 200 George Street presented the ideal address for a city developer," says Chan.

Architecture firm FJMT was awarded the design for the building, in part for its strong design concept for a warm, approachable building – a more human-friendly high-rise than the rectilinear buildings around it. The curvaceous nature of its interconnected towers and a facade animated by closed-cavity wood-blind elements are leading character features. 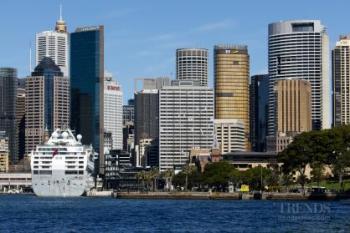 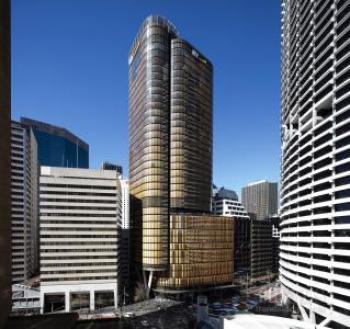 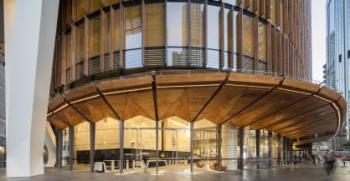 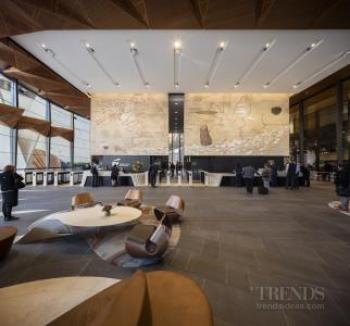 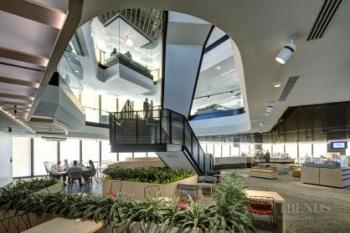 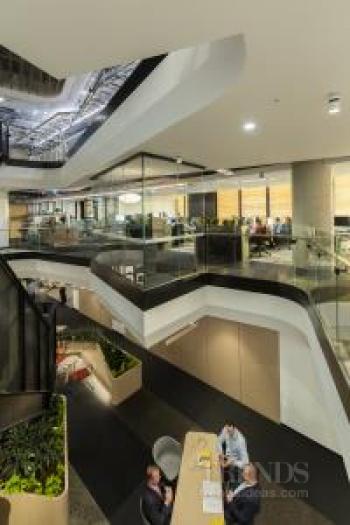 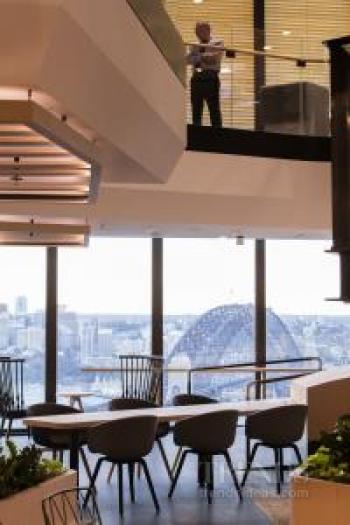 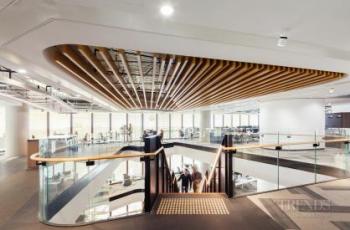 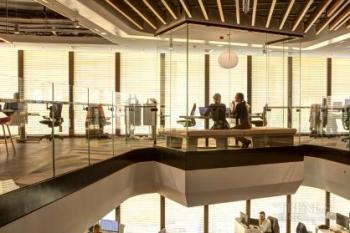 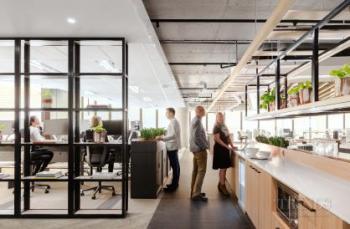 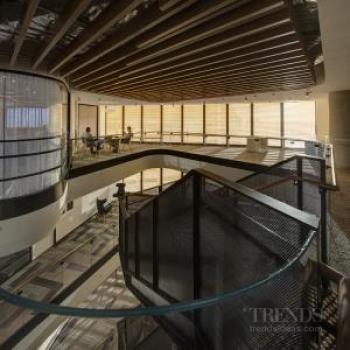 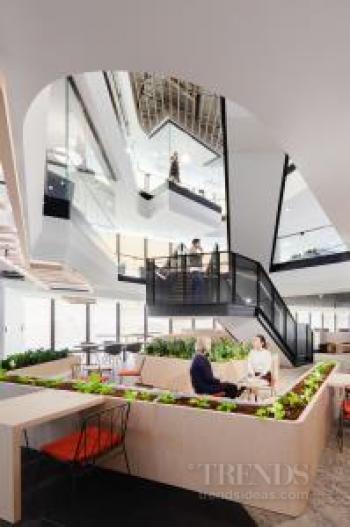 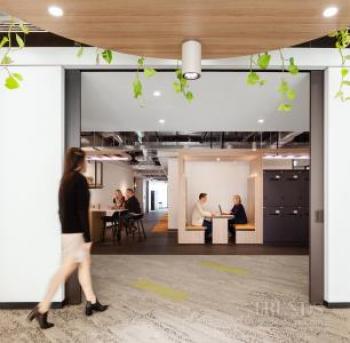 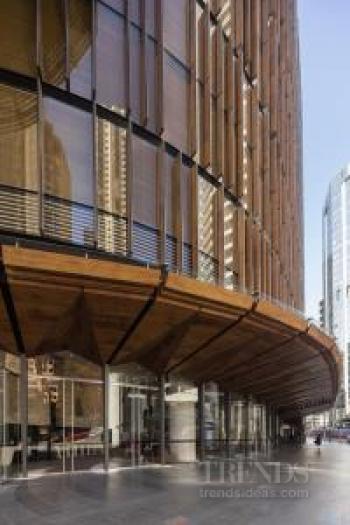 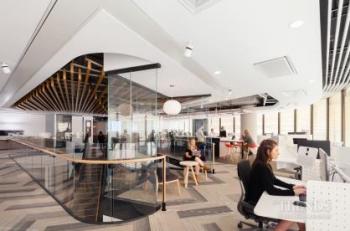 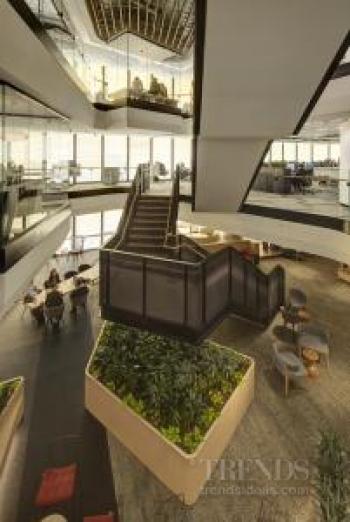 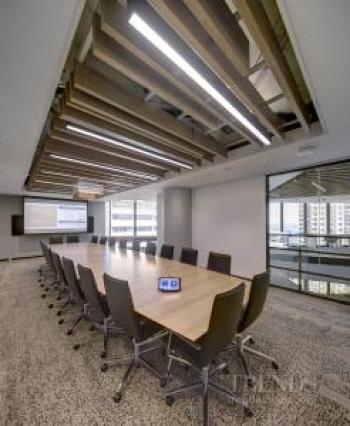 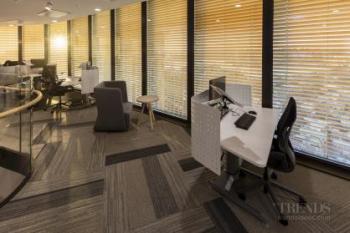 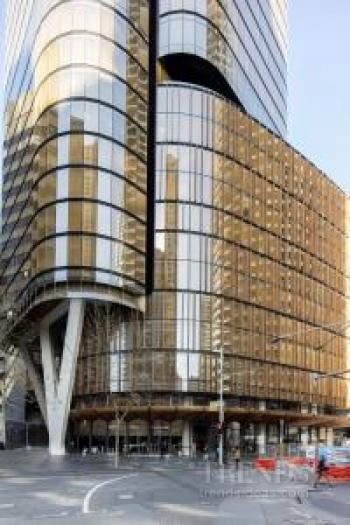 FJMT design director Richard Francis-Jones says the primary form of the building is created through the interlocking of four elements.

"There's a folded stone ground-plane, which defines the public spaces; a human scaled street-defining form to George Street; an expressed side core accommodating lifts, stairs and amenities, clad in sandstone and terracotta panels; and the two intersecting workplace tower volumes orientating north and west to the harbour and bridge.

"This building embraces natural materials, in particular wood and stone, materials of quality and character – it appears in the city as a tower made of timber rising out of the greyness of its neighbours.

"In essence, it's a building made of traditional materials that we've already been building with for thousands of years but are here utilising advanced technology systems," says Francis-Jones.

The facade on the EY Centre is comprised of multiple layers – an outer layer of a single sheet of low iron clear glass, behind which are the automated natural timber louvres set within a sealed, pressured cavity that is clean and dust free. Finally the inner layer is a double glazed high performance insulating unit.

"The result is a facade that outperforms any of the grey glass buildings and looks nothing like them. It is clear and transparent, and the natural colour of the wood glows in the sun."

The automated blinds also create a sense of animation – as blinds are drawn up or down controlled by the building management system to optimise solar control. As a result, the look of the facade changes day to day, or even hour to hour.

And if the ergonomic design and natural-look facade set the building apart from the outside, the interior architecture – including Mirvac's own head office fit-out – sets it apart on the inside.

"The building has been designed to create flexible workspace horizontally and vertically," says Francis-Jones. "This is achieved through the incorporation of a floor system that accommodates future atrium voids and interconnecting stairways."

The EY Centre is also one of the first of a new breed of ‘smart buildings' in Australia and this is where promotion by example comes in. Mirvac's own headquarters respond in real time to the workplace environment and employee needs. For example, technology monitors power and water usage, and the quality of the air, enabling adjustment according to the changing needs of the building and its occupants. The data is used to manage the headquarters, as well as inform how Mirvac engineers can help the company's clients build workspaces in the future.

The fit-out for Mirvac's own workplace was by Davenport Campbell, led by co-principal Neill Johanson.

"To help test Mirvac's new way of working, a fully operational pilot site called the Living Lab was built next to Mirvac's existing workplace. It was then possible for our team to fine tune the HQ project based on feedback from the pilot," says Johanson.

Mirvac's old offices had been over six floors with only one stair, but the progressive company wanted quite a different approach here. So, involved in the project from the time of the building's construction, Davenport Campbell was able to customise the base build and have inter-floor stairwells expanded and given an individualistic, curvaceous form, with no straight lines employed.

"The sculptural voids were vital to communicate connection, community and innovation – core values for Mirvac," Johanson says. "From the moment you enter the HQ on the social and meeting-oriented Town Hall floor you are immediately in touch with who Mirvac is and what it does."

In addition the floors were raised on the fit-out to allow easy relocation and connection of services.

"Helping Mirvac create a unique customer experience was quite a challenge. The Town Hall had to support Ted Talks, share price announcements, product launches and social events, so we raised the floors to provide the greatest amount of flexibility for these curated experiences.

"In an environment focussed on enabling people to choose how and where they work, developing an effective location strategy became critical to the success of the project. Mirvac invented an App and dashboard that did just that – help employees find a spare desk or locate a colleague via their phone."

This contemporary facility is known as Jelly Bean working, referring to the little green light showing on or off on social media sites.

Complementing the Town Hall with its meeting spaces and reconfigurable forms, the open-plan office spaces are divided up into neighbourhoods connected by Main Streets. The only personal space allocated to workers is their lockers and storage, which are positioned on these streets.

"The fit-out keeps Mirvac's prowess in advanced engineering to the fore, with cutouts in the floors and ceiling revealing the building's state-of-the-art services. In addition, the temperature inside and out the sealed blind cavities can be displayed on a smart phone, as can a purpose-specific meter measuring even the slightest structural movements in the building – another example of engineering savvy on display."

These precision building performance measurements plus pro-active health initiatives, such as healthy air, optimum natural light and the provision of 257 bicycle spaces plus 50 more for visitors has added up to the EY Centre and Mirvac's own fit-out attracting a plethora of green awards. These include a base building targeting a 5 NABERS energy rating, and a 6 Star Green Star As-Built rating for the building. Mirvac has also been one of the first offices to achieve the Gold WELL rating, which takes a holistic approach to health in the built environment – looking in particular at behaviour, operations and design.