Just as there are architectural styles that have become synonymous with a particular region, so there are interior design schemes that are equally revealing. One glance at this interior, for example, is enough to tell you that the house is on the coast of New England.

At its core is a design that merges cottage charm with a nautical theme, says interior designer Jon Hattaway of MJ Berries Design.

"It is a mix that conveys blissful comfort and summer at the same time. It is bright, colorful, tactile and dynamic, while being uncluttered, undemanding, yielding and welcoming."

Stripes play a central role in the design. Long associated with sailors, stripes were adopted as symbolic of summer leisure activity by the end of the 19th century, and are a motif the designer always chooses for a summer house.

"As a design device, stripes add dynamism to any interior. In the words of Man Ray, stripes reveal as much as they hide. Every interior succeeds as much for what is implied as for what is on show," says Hattaway. 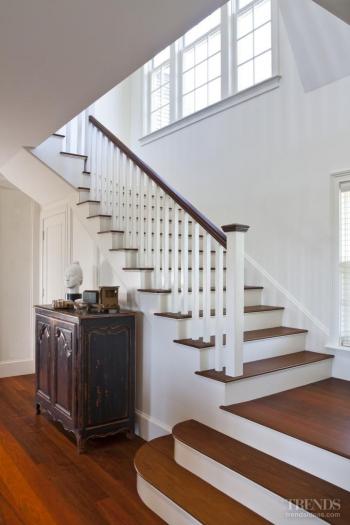 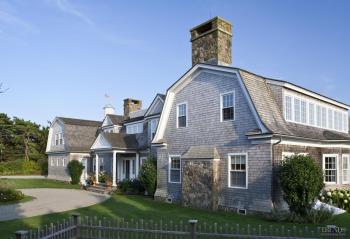 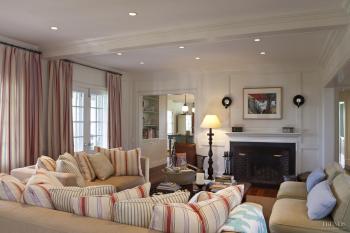 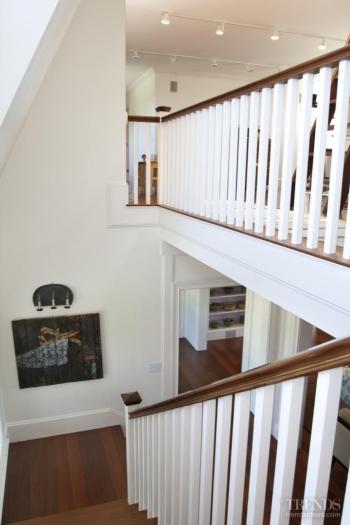 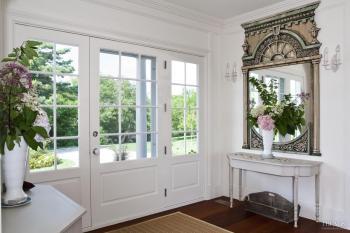 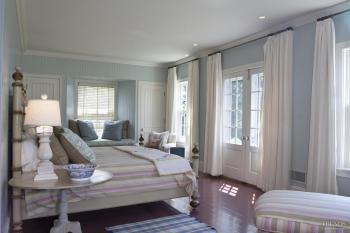 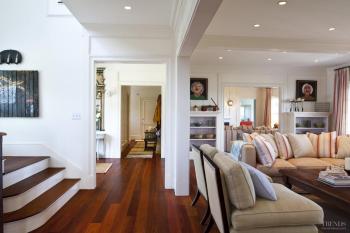 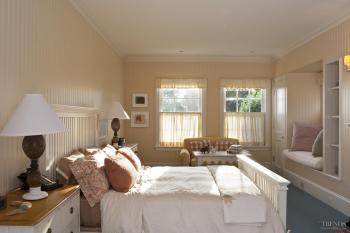 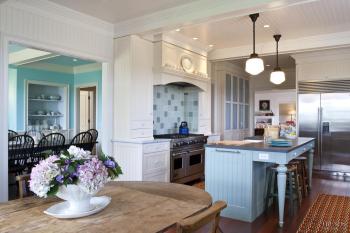 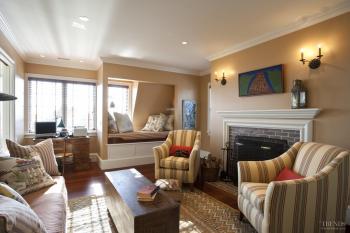 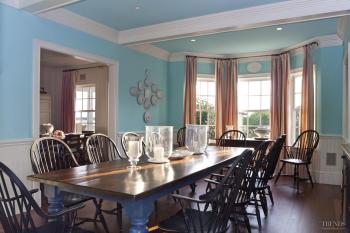 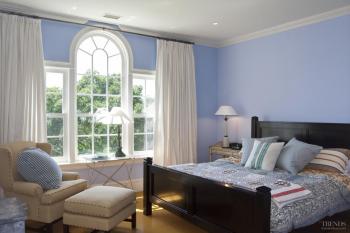 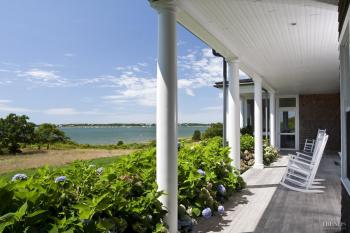 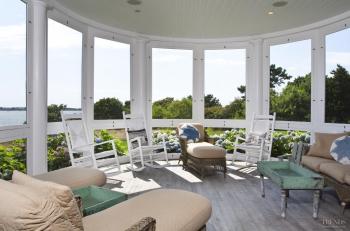 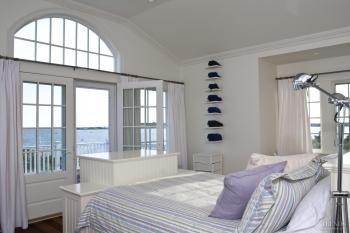 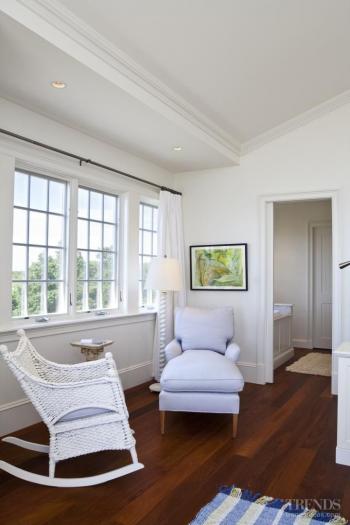 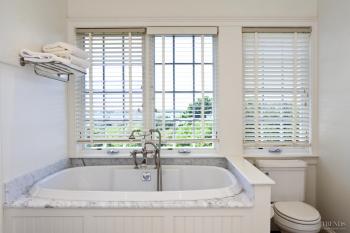 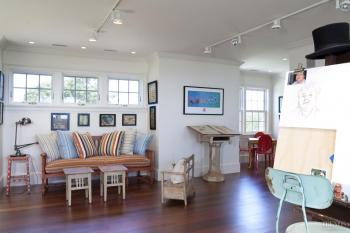 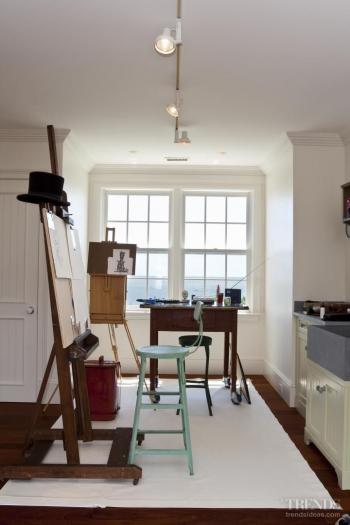 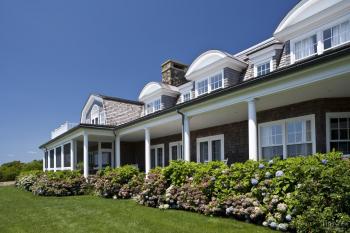 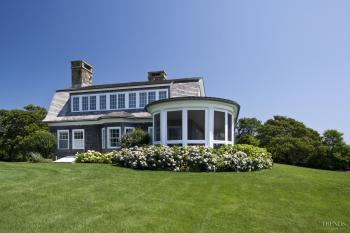 The color palette, too, is an important factor. The imperative here was to build on a foundation of freshness with nature-inspired accents.

"When choosing the palette for a room, I am guided by its intended use and whether it will function as a personal or public space," says Hattaway. "For this house, of course, the setting also had a large influence on the color scheme."

In the main living area the designer chose shades of white for the walls, ceiling and trim.

"Although it doesn't look like it, this is a very large room – 25ft x 18ft – so the priority was to keep it light hearted. By varying the shades of white you create a very clean feel, yet there is still a subtle tonality for added effect."

Off the living room, the kitchen continues the white-on-white theme, but here the designer has introduced accents of blue in recognition of the oceanside setting.

Although extensively remodeled, the kitchen maintains a sense of history through the use of traditionally styled cabinetry.

"The look is key," says the designer. "The cabinetry is augmented with period pieces, both American and European, to create the sense of an organic progression."

The same is true in the dining room, where reproduction Windsor dining chairs establish a theme that is reinforced by the collection of Victorian-era white ironstone china tureen lids, used as a wall sculpture.

Another theme, which Hattaway says was prominent in this interior design, is repetition.

"You have to remember, this is a summer house. The rules of design are different when you're dealing with a secondary residence – harmony is achieved through repetition. Simple forms, such as stripes, and honest, genuine materials carried throughout strengthen the overall coherence."

In the master bedroom, Hattaway has brought a number of elements from the rest of the house together, including the white color scheme as a base palette. Joining the blues and greens of nature are various shades of lavender – a soothing color well suited to bedrooms, says the designer.

"The secret here is the minimal use of color overall. I'm a big fan of using only one or two colors in a bedroom, but creating visual interest through the use of multiple shades of those colors," says Hattaway.

"Again, stripes play a big role in reinforcing the holiday home appeal. There's no need to limit this to pattern. One of the easiest ways to introduce stripes is with Venetian blinds. The atmosphere created within a room simply through a partially closed Venetian blind is second to none – you gain privacy but there is still natural light."

Other authentic touches – often associated with oceanside homes – have been included in the master suite. Most noticeable are the wicker furnishings, in the form of a rocking chair and sewing basket. A display of bonnets of Amish origin makes a simple, yet effective, art work.

Situated off the master bedroom is an open passage, which was wide enough for the designer to include a small home studio for one of the owners.

"The siting was perfect, as this area of the house is relatively isolated from the day-to-day activities. It also meant we could have some fun with the space in terms of decoration.

"One of my favorite pieces in the house is found here – the small, colorful stool that is being used as a lamp stand. We sourced this piece through Gateway Arts in Massachusetts, and together with the framed box lids and board games, it lends the space an air of pure fantasy," says Hattaway.

An old cane lounge, antique English child's bench and antique lectern round out the eclectic furnishing in this area.

"These are unexpected touches, but they are not out of place. Both owners are artistic people, with an artistic sensibility, so there's an affinity there. While these pieces don't strictly belong with the rest of the decor, each has its own interest and a sense of the past that unites them within the wider context."

It may be a vacation home, but the owners agree, it is their favorite place to relax, welcome family and friends, and simply to be.