Taking the less predictable approach to interior design is the secret to a lively, interesting living space. For this project – a new apartment in the former Bank of New York building – that meant maximizing the semi-industrial nature of the building and its materials.

The apartment, designed and owned by interior designer Laura Bohn and husband, developer Richard Fiore, reflects her appreciation of such elements. Walls are a concrete gray – a color that reinforces the sense of the outside walls extending through into the living areas.

"Concrete is a color I use a lot in my work," Bohn says. "I love the way the different shades of gray can form a neutral backdrop that goes so well with many colors."

The concrete association is further reinforced by a large cut-out in a wall, originally the side wall of the bank. Bohn and her husband acquired the annex next to the bank building, and extended their living area into this space. The difference in levels was retained and is a key feature of the open-plan living area.

"We added 16-inch rubbed oak seating around the perimeter, with an additional step down in two areas," says Bohn. "This allows us to seat up to 30 people when entertaining." 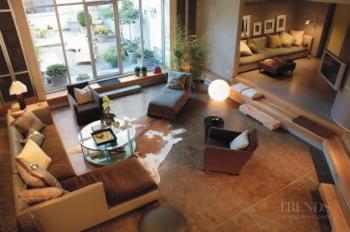 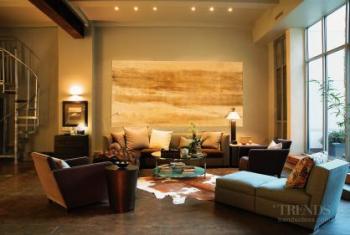 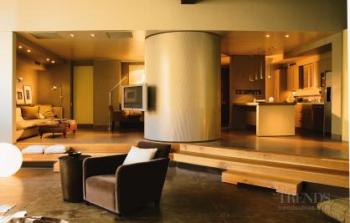 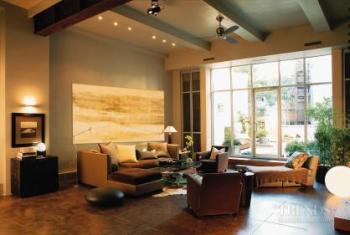 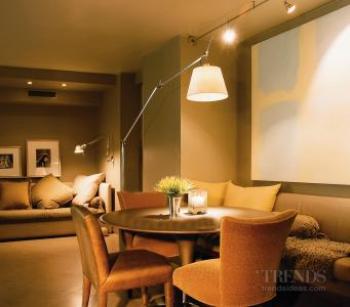 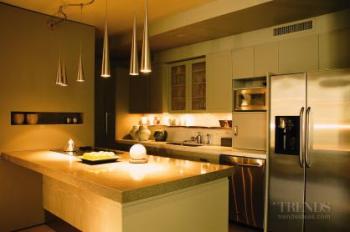 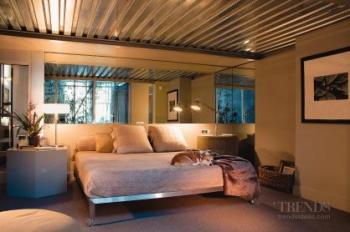 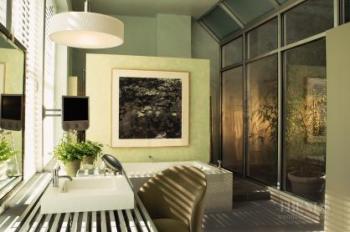 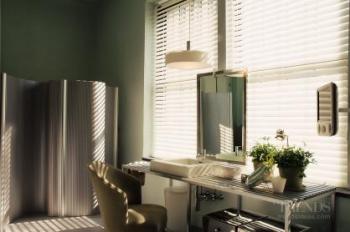 Bohn says the rusty color of the sanded concrete floor helped determine the other colors throughout the house.

"The flooring was a lot less gray than usual, so I have opted for warmer tones," she says. "For this reason, also, I didn't weather the wood seating to a natural gray, which I typically like to do."

The warm brown, beige and chartreuse tones are repeated in the furniture, which is an eclectic mix of pieces.

"I deliberately mix the furnishings, preferring not to match anything," says Bohn. "It is the best way to introduce texture to a setting. The custom-designed sofa, for example, features a mohair fabric and an inexpensive faux leather.

"Pillows are also a real mix, with a variety of materials. Sometimes I will use four different fabrics in the same color, simply because I have fallen in love with the fabrics. The pillows are all large, as opposed to small throw pillows. Comfort is all important."

Bohn says proportion is the single factor that pulls the look together.

"I am constantly looking at the scale of the pieces. Maintaining similar proportions is essential."

Another semi-industrial feature dominating the living area of this apartment is the corrugated plastic sheeting with a metallic finish that wraps around a massive T-shaped 5ft-wide structural column. The cylindrical structure visually separates the dining and informal living spaces, and supports a pivoting television. It also conceals a storage area.

In keeping with her preference for diversity, Bohn has combined banquette seating with two different styles of dining chairs. The lighting is also a mix of styles, with floor and wall lamps, uplights, downlights and ambient light.

"My interiors are usually a case of form following function," she says. "The fixtures were chosen to provide the exact type of light needed for each specific area. For example, the S-shaped fixture above the island countertop throws a zig-zag lighting pattern on the table, which looks more animated than a standard fitting."

Theatrical lighting also makes an appearance. The lighting above the spiral staircase has a lighting gel, which creates a soft, shadowy relief.

Bohn's preference for unstructured interiors is further evidenced in the kitchen. To avoid the look of a built-in kitchen, there are two different countertop patterns of Okite. The peninsula-island features a limed wood that allows the grain to show through.

Individuality also highlights the master suite. Here, aluminum Q-decking features on the ceiling of the master bedroom. Further textural features include a custom-designed vanity made from aluminum tubing, and a reversible S-shaped screen featuring aluminum and wood.