This sprawling residence has the feel of a traditional country home. However, a closer look reveals a strong contemporary edge

Well-considered architecture can provide different impressions for different sets of eyes. For example, a large country estate might have to harmonize with neighboring traditional residences, but at the same time accommodate the owners' love of modern architecture.

This was very much the situation, when architect James Choate undertook the design of a sweeping neighborhood estate in an area typified by stately, classic-styled homes.

"The owners have contemporary sensibilities but chose to build in a neighborhood predominated by classic architecture," says Choate.

The architect's design solution was to build the residence along classic lines but with a strategy that addressed the profiles, proportions and materials in a contemporary way.

"From the street, tall chimneys, dormers, gables and stonework all suggest a traditional residence," says Choate. "However, some of these elements are stylized, proportions stretched, and materials used in subtly different ways, resulting in a modern, almost minimalist architectural language." 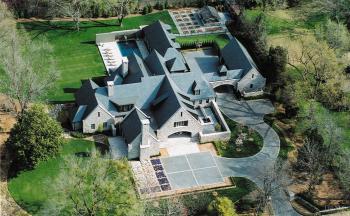 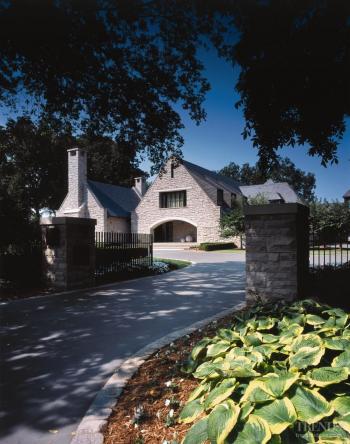 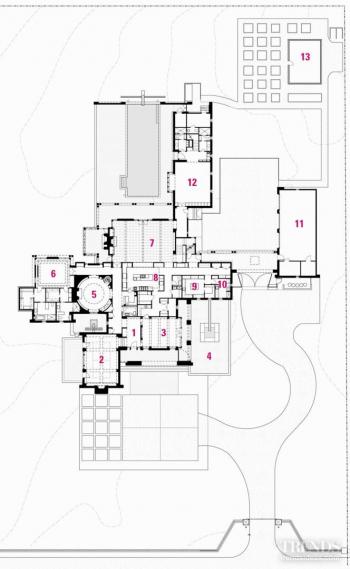 The stone veneer, mined locally, has a cleaner, more regular edging than traditional coarse, rural stonework. Similarly, the roof line is conservative but the parapets on the gables and the caps on the stone chimneys are created in a refined limestone, and have modern geometric profiles.

"A sense of permanence and solidity was also addressed by the architectural detailing," says the architect. "By introducing a deep entry arch, an onlooker might assume the entire house is constructed in similar dense proportions. Similarly, window reveals read as if the walls are two-feet deep – unusually wide mullions and parapets also contribute to this impression."

While these architectural proportions underscore a feel of traditional and permanence, a sense of a history is also implied through the effect of time and weather on the materials.

"The stonework and exposed timber will weather quickly and gracefully, contributing to the feeling that the residence has been standing a long time," says Choate. "We also introduced ivy on the rear walls to add to the sense that the natural environment has claimed the house over time."

The estate's sprawling size was a naturally defining element in the home's design. Set within a large grid-system of neighboring properties – mostly of half an acre to one acre – the architect tamed this larger two-acre lot by dividing it into precincts, or areas, with the house in the middle.

"The front left quarter contains a formal garden; the front right area comprises the guests' parking and formal entry. The rear left quarter is a family outdoor area, and the rear right has the family car parking, a greenhouse and service areas," says Choate. "The feel is of four half-acre sections rather than one huge expanse. And these outdoor areas are designed to be enjoyed as much from within the home, through strategic layout."

At first glance, the internal layout of the house appears rambling, almost organic. Yet, in reality it is composed along a series of independent axes. These axes provide occupants of the home with long, uninterrupted vistas right through the rooms out to exterior water features or other garden elements in the various precincts.

"The design evolved from an understanding of how various spaces would interact, including the gardens," Choate says.

At the center of the many individual axes stands the hub of the home, the kitchen. This double-height room opens to study areas and the teenage and adult children's bedrooms upstairs, allowing an easy communication between the spaces.

A nearby, double-height library is a sister space to the kitchen. It follows a similar dual-use layout, with its parental component downstairs and the ringed gallery upstairs for the adult students' use.

The interior design follows similar precepts to the exterior: classic solid values are celebrated, but with an abstracted, minimalist feel.

"Central to this, are the home's ceilings. Each is treated quite differently, as an architectural event," says Choate. "The dining room, near the entry to the residence, has massive beams running across its ceiling. They suggest original post-and-beam structures, and the dimensions are almost overly substantial – but at the same time, they are painted white and, in a sense, given a minimalist, modern spin."

An adjacent formal living area has an even more pronounced ceiling presence.

"This dramatic ceiling is reminiscent of the interior structure of a large barn – with the look of solid beams, with no bolts or trusses to detract from their impressive forms," says Choate. "These sculptural elements give way to warmer, exposed wood beams in the family room ceilings."

The interior designer on the project, Charles Gandy, explains how the rooms work.

"Apart from the overhead features, the interior has a demure feel," says Gandy. "The owners have many artworks, and the consistent white palette and pared back finishes provide a suitable backdrop. Similarly, neutral oak floors run throughout."

"Another important aspect of the decor was softening the strong architectural lines with draperies, textured upholstery and carpets," says Gandy.

Family rooms, including the kitchen, have a similar palette to the formal areas, but with a warmer feel, partly through the inclusion of wood surfaces.

From the four quarter-acre precincts down to the living rooms' flowing curtains, the home's easy, rambling feel is, in reality, carefully considered.