By seeking out materials that embody the history of its location, this new home has acquired an established quality

In the hunt Discover this article's resources 0

For a country house to embody a sense of its rural location, careful attention should ideally be paid not only to its natural surroundings but also to the history of the human settlement in the area.

When homeowners Gavin and Deborah Humphrey set out to create this holiday home in central Otago, they wanted the architectural design to fit into the rugged landscape, and the interior to reflect the roots of its pioneering settlement.

"This house is a complete contrast to the contemporary home we live in all year round. The area has a different climate and an interesting history, and we wanted the house to reflect this," says Gavin Humphrey.

Designer Steve Humpherson says he planned the home as a cluster of farm buildings.

"As the house is designed in harmony with its pristine natural environment, the expansive layout heightens the sense of wide open space." 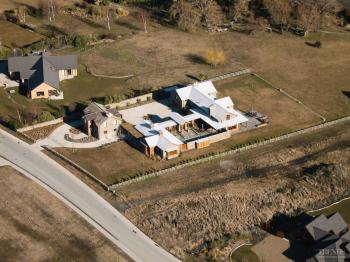 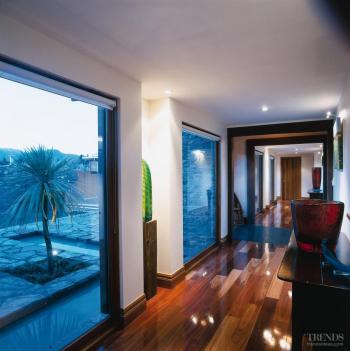 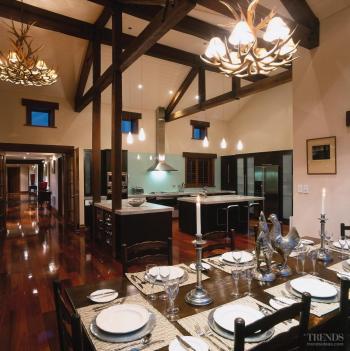 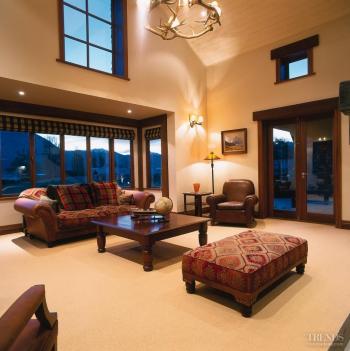 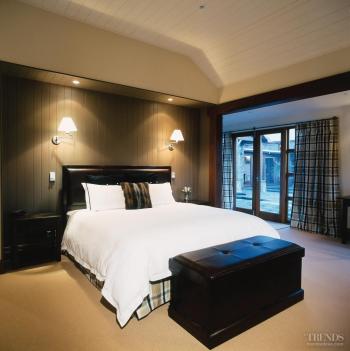 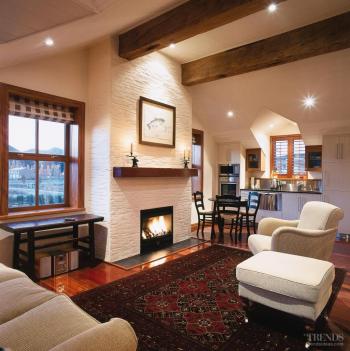 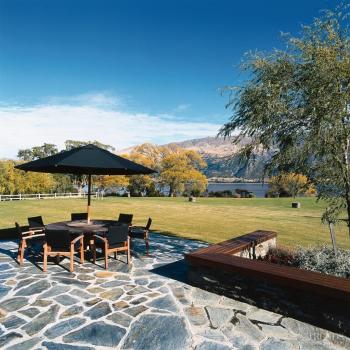 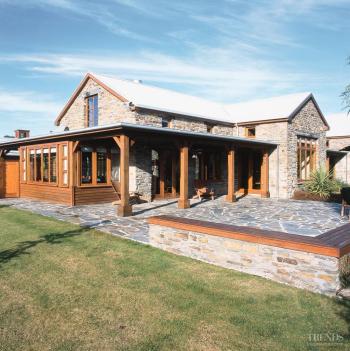 The main house is shielded from the road by a garage with a guest quarters above – the only two storey structure in the complex.

Clad in schist stone and weatherboard with a cedar shingle roof, the guest house is like an old barn that has been renovated. Humpherson says the guest house is designed to look as if it is an original structure whose rustic architecture inspired the design of the main house.

"The entire complex has the appearance of having evolved over time."

A large, open courtyard is the only exterior space shared by both the guest and main house.

In the middle of the courtyard is the entrance to the main house, its gabled doorway the pivotal zone in the complex. It leads straight outside to a private courtyard paved with schist stone that contains water features and a plunge pool. This smaller courtyard is designed to provide shelter from the prevailing wind as well as privacy.

To the right of the entrance way are the bedrooms and to the left are the main living areas. A long gallery, with jarrah timber floors and large windows looking onto the pool courtyard, connects the house's public and private wings.

"Its generous proportions provide an appropriate prelude to the centrepiece of the home – a great room modelled on the alpine hunting lodges of Northern America."

This large room contains the kitchen, dining and main living areas. Its 3.6m-high tongue-and-groove ceiling is painted white to enhance the sense of spaciousness. Ceiling trusses are made from recycled hardwood sourced from demolished bridges and disused public works in the area.

A simple, earthy colour palette in the large open-plan kitchen is achieved with a pale green glass splashback behind the appliance wall and white stone benchtops on the islands.

In the living area a chimney made from local schist stone is the visual focal point. The hunting theme is enhanced by the mounted deer head. One of three animal heads featured in the house, it matches the deer antler light fittings that can be seen throughout the living areas. The animals were hunted in a nearby mountain range and the distinctive chandeliers sourced in Mexico.

Gabled windows in the main living area allow the northern sun into the large space, providing warmth and natural light. A conservatory at this end of the room is used by the owners as a study.

A second sitting area can be accessed from the kitchen. This shares many of the same design features as the great room, such as a schist stone chimney. As it faces the lake, the timber-framed doors open out to a barbecue area.

Throughout the house, Humpherson has emphasized the connection with the outdoors.

"Windows are strategically placed to showcase not only the view, but also the landscaping, such as the distinctive water features," he says.

Above the sitting area, on a mezzanine floor, is the home theatre room. Its main features are a 100in screen, black leather sofas and a coffee table upholstered in cowhide.

On the opposite side of the house, there are three bedrooms, each with their own bathroom. In the master bedroom the bedhead is nestled inside a recess painted in a muted olive tone. Between the bedroom and framed glass doors is a narrow corridor, built to follow the veranda line of the house.

A stretch of lawn beside the sitting room facing the lake contains a steep schist stone stairway that leads to a lower lawn and onto the water's edge. The gradient between the two levels is sharper because the ground beneath the house's living area was raised by 1m of compacted hard soil.

"To achieve an architectural design that followed the line of the surrounding mountain range, the main house is one storey. But this meant we had to raise its foundations, to take maximum advantage of the view," says Humpherson.