With its 6-Star Green Star rating and interactive, campus-style design, the new head office for Energex ensures the power supply company can lead by example

IN collaboration Discover this article's resources 0

Research and experience have proven there are many efficiencies to be gained in consolidating a workforce in one central location, rather than having divisions spread over several sites.

But when your workforce numbers 3500 and you require 28,500m2 of office space for half of these employees in one city, finding an office is no small task. And that was just the start for Queensland energy provider Energex. As a promoter of energy efficiency and conservation, the company also wanted to walk the talk with its new head office, says David Kelly, project principal and Kellie Newman, project architect for BVN Architecture – the company contracted to develop the architectural brief and design the interior of the new office.

"Sustainable design principles were always a key consideration," Kelly says. "So, too, was the need for a campus-style building with large floorplates. Energex was very interested in exploring the idea of best practice in the workplace. Consequently, the company required a highly functional and flexible workplace that would facilitate a new corporate culture – a transparent, interactive and collaborative work environment that would provide a high level of interdepartmental connectivity.

"We envisaged a village enlivened by the energy of the people. To take the analogy further, the original plan was designed and presented to Energex as a circuit diagram, utilising switches, resistors and capacitors to describe elements within the fit-out."

Kelly says it quickly became apparent that such an office could not be accommodated within any existing building in central Brisbane. Larger buildings on the city fringe did not have transport or services infrastructure to support such a population. As a result, the firm researched other options, and subsequently FKP Property Group and Cox Rayner Architects were contracted to design and build a new head office on a brownfields site in Breakfast Creek Rd at Newstead Riverpark – coincidentally, the site of the former Gasworks. As well as providing a large site, the Newstead Riverpark location met a number of other requirements, including the need to be close to public transport and part of a vibrant, growing community of mixed-use developments. 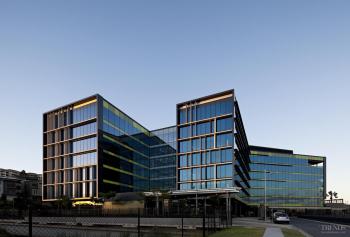 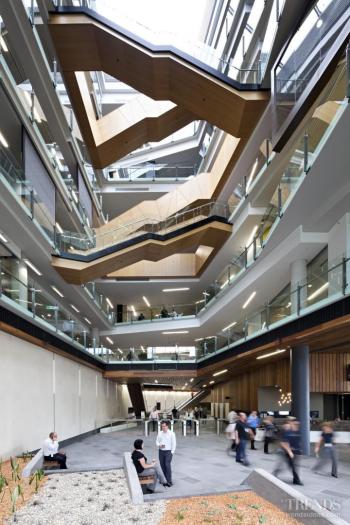 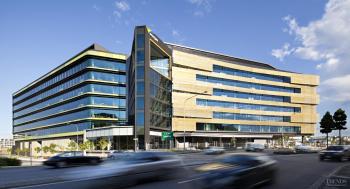 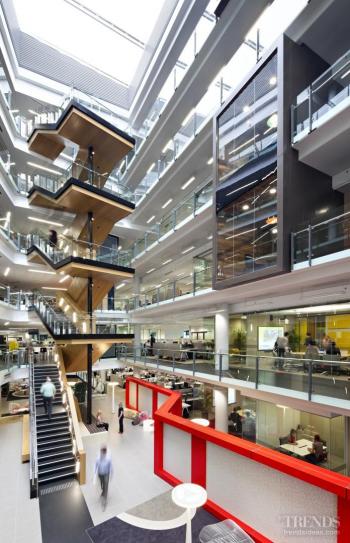 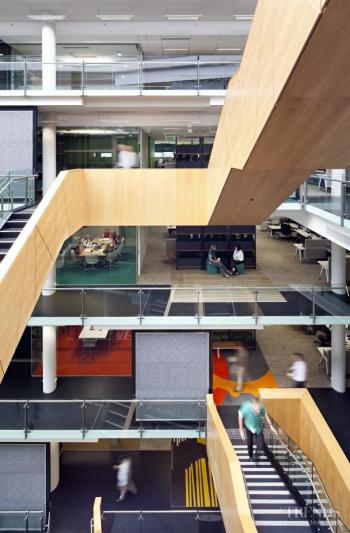 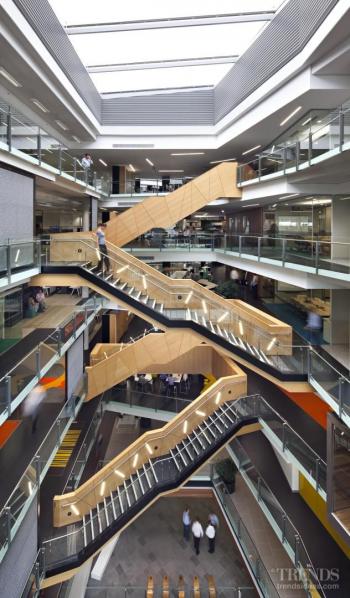 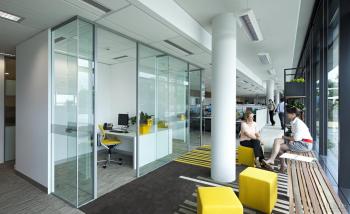 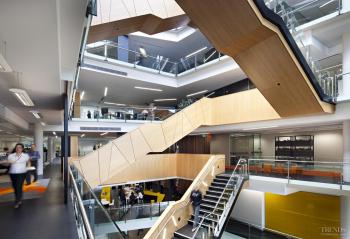 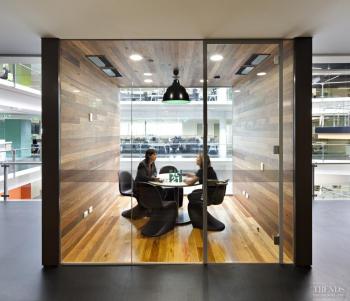 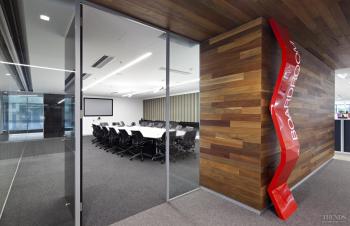 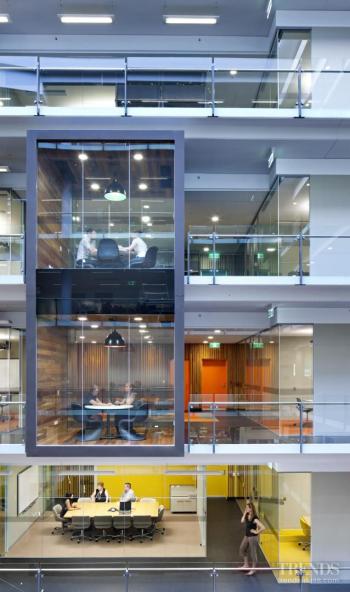 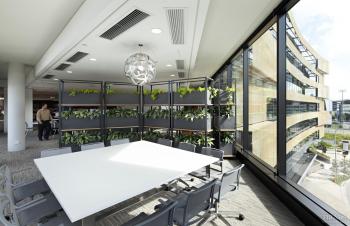 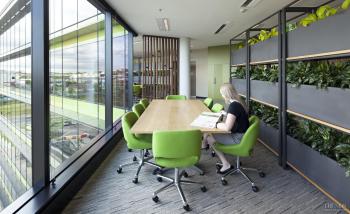 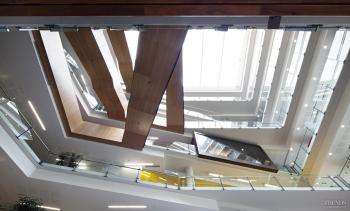 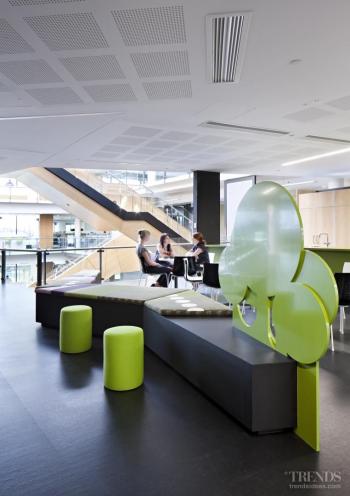 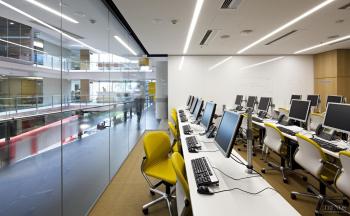 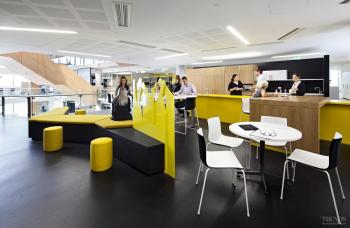 "Two parallel wings with 20m-wide floorplates are wrapped around the north and west street edges to protect a public arrival zone, and to provide views back to the park and across to the city. The floorplates in these wings are elevated and separated by an atrium with a transparent roof, and linked by multiple walkways, stairs and bridges."

Coulson says the western wing is slightly longer than the eastern wing, to further protect the entry plaza and café, and to secure the best views.

The floorplates are also modified in two areas to augment the design. At the entry, the southern plate is chamfered to maximise the ambient southern light into the atrium and to enhance the visual connection between the atrium and the entry plaza.

"On the opposite side, at the intersection of the two wings, the floorplate is projected out to form a defined room space," says Coulson. "This celebrates the corner and the corresponding bend in the road. The space provides meeting rooms that allow people to look down the length of the street in both directions."

The ends of the buildings are glazed, with vertical fins added to the southwest-facing glazing to screen the sun in the afternoon. The west-facing facade features a woven anodised-metal screen that reduces the light load from the west by 50%, which in turn minimises the heat gain inside. Visually, the screen and horizontal fins on the northern facade also modulate the length of the facade, helping to articulate the building.

On the interior, the floorplates are organised around an open lift core and the central atrium. In keeping with the sustainability requirements, all work areas are within 10m of natural light from either the exterior of the building or the light-filled atrium. The central cores of each floorplate have been given over to service areas.

Coulson says each 4500m2 floorplate is about four times the size of the more traditional floorplates offered in CBD buildings.

"The generous size means more staff can be co-located on one floor, which eliminates divisions created by having staff over separate floors. It also eliminates inefficiencies through the replication of support facilities. Larger numbers of people on floorplates can also provide a catalyst for better team interaction and collaboration."

To ensure the floorplates don't seem impersonal, each plate is divided into connecting quadrants. A hub by the lift lobby on each floor extends around the central atria. Open, enclosed, formal and informal meeting spaces are centred on this space, which incorporates a café and breakout areas. These spaces generate activity and high-energy zones throughout the core of the building. Each floor is also defined by vertical gardens and its own colour theme that enlivens the public spaces and workstations.

Extensive perimeter glazing ensures there is a transparency through the building, reinforcing the sense of connection. Furthermore, the interior has been animated by walkways and a sculptural staircase that winds up through the atrium like a ribbon.

"The beech timber staircase adds visual warmth to the interior, which contrasts the colder glass and steel elements," says Kelly.

In keeping with the need for sustainability and flexibility, a standardised, modular approach was adopted for the design, joinery, workstations and furniture. The modularity of the grid means banks of meeting rooms can be replaced easily with clusters of workstations if required.

Recycled materials were used wherever possible. These include recycled Energex timber power poles – the timber features in foyers and ceilings on the ground floor.

Other ESD initiatives include an active chilled beam air conditioning system that provides fresh air rates 150% above Australian Standards. The system provides high air-change effectiveness, with no recirculation. The Green Building Council of Australia reports that CO2 emissions will be cut by more than 2100 tonnes annually, which is equivalent to removing more than 520 cars from the roads. Water management systems include a 200,000-litre rainwater tank that supplies water for toilets and landscape irrigation. This will see a 55% reduction in water use.

David Kelly says the ESD principles have also had a major spin-off in other ways.

"Operating from a centralised headquarters has increased productivity and operational savings, which is expected to save Energex $22 million over a 15-year period. In addition, Energex anticipages improved productivity from reduced external parking, travel time, taxi costs, and costs associated with space change and lease management."