To ensure this kitchen is not visually isolated from the rest of the house, it features similar Tuscan-style detailing

In character Discover this article's resources 0

For many homes today, the kitchen is command central – the center of operations for the entire household, as well as the social hub for entertaining. This functional role means the modern kitchen also has a much greater visual prominence than ever before, which in turn has a direct bearing on its design and material palette.

The kitchen featured on these pages is at one end of a large great room – a space that is open to a formal dining room, foyer and an outdoor living area. Architect Ron Robinette says the kitchen's prominent position and open layout mean it is visible from many parts of the house. For this reason, it was crucial to design a kitchen that would be in keeping with the home's overall Tuscan-style character.

Interior designer Lawrence Lake says the sheer size of the kitchen was another important consideration – incorporating a mix of materials was a way to reduce its scale while still providing dramatic impact. Designing two islands – one a functional work area, the other a beverage center – also helped to break up the space visually.

The main wall cabinets have a dark walnut stain, with an antique glazed finish. This dark, solid cabinetry visually anchors the rear and side walls of the kitchen, helping to enclose the space. Two display cabinets, however, are illuminated to highlight a travertine mosaic backsplash that extends behind the units. 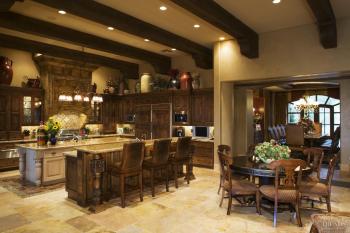 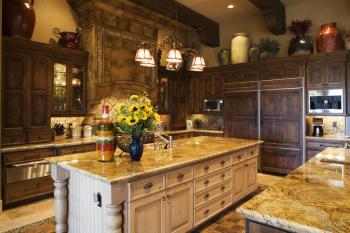 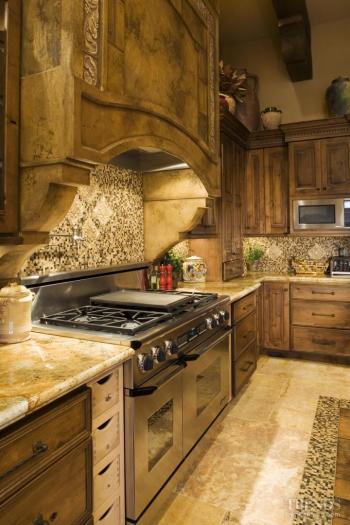 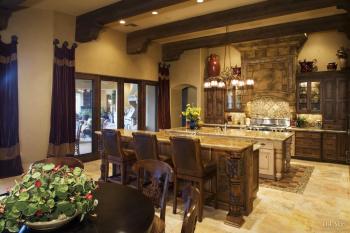 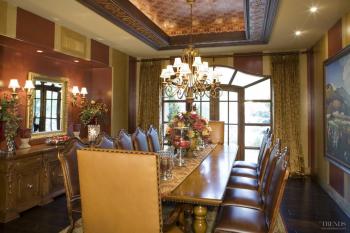 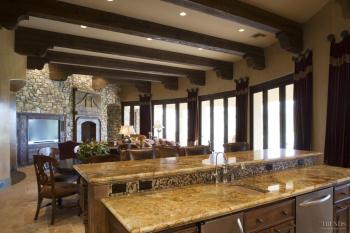 A large chimney hood on the rear wall is another distinctive feature – it has a faux paint finish, which has been scoured and routed to replicate a traditional stone fireplace.

"The chimney hood is directly opposite a massive stone fireplace," says Robinette. "We needed to balance this element within the great room, and although the kitchen hood is smaller, it is still a dominant feature."

The main island has a hand-painted cream finish, with a chocolate glaze enhancing its distressed, furniture look. The second island, which incorporates a bar top, has similar spindle legs, and a dark walnut stain that matches the wall cabinetry.

"Providing a second island meant we could take some of the usual elements out of the main work triangle – for example the ice maker and refrigerator drawers," says Lake. "This allows the family to help themselves to drinks and snacks without interfering with the main food preparation area."

The raised bar top on the front island ensures kitchen clutter is hidden from view. This island has more ornate detailing, in keeping with the formal elements of the interior.

To provide further visual continuity, the kitchen has the same travertine marble flooring as the rest of the house – with a tiled rug pattern adding interest around the main island.