In character Discover this article's resources 0

Part of the charm of traditional houses is the way they appear to age gracefully, settling into the landscape as though they have always been there. This country house was designed to do just that, says owner-architect Stephen Akehurst.

Having owned a neighbouring property, Akehurst took the opportunity of purchasing the site when it came onto the market – largely to preserve the ocean views from the house he had rebuilt next door.

The architect says the land was originally paddocks with many mature eucalyptus trees that provided an idyllic setting for a new house.

"The architecture was influenced by the first house I designed," Akehurst says. "I wanted something that would be complementary but not exactly the same. It consequently has a similar traditional feel, but the details are different."

For this project, the architect designed a symmetrical two-storey central facade with lower asymmetrical wings. The steep hipped shingle roof has a bellcast edge profile, and there are dormer windows within the roof on the two wings. 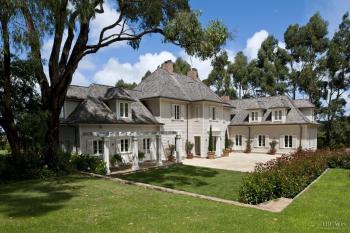 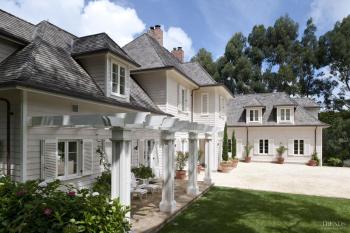 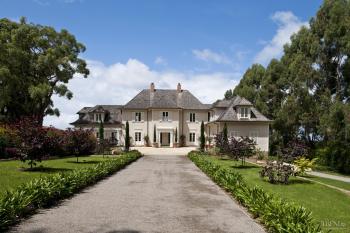 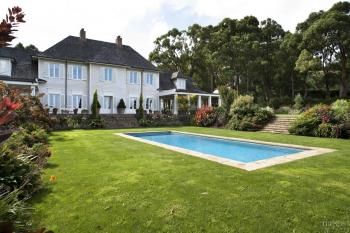 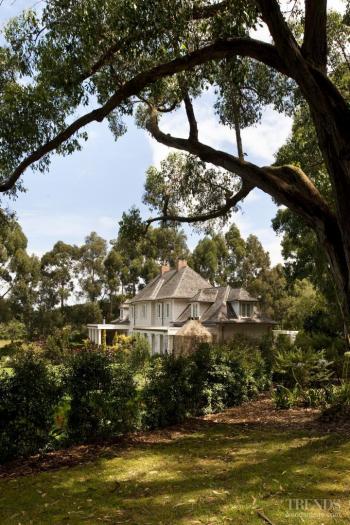 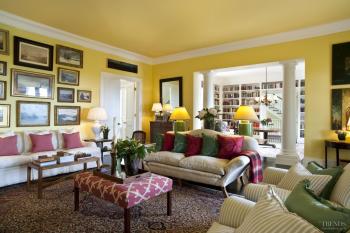 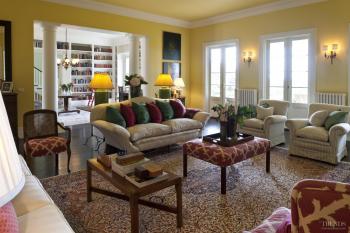 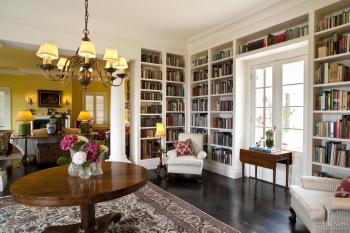 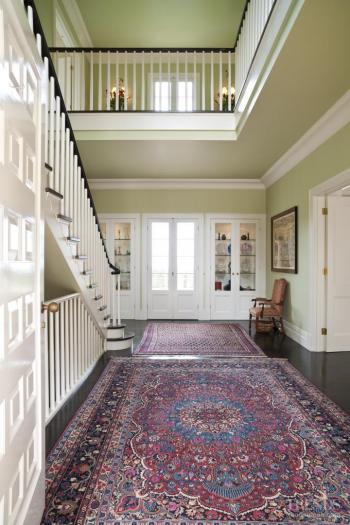 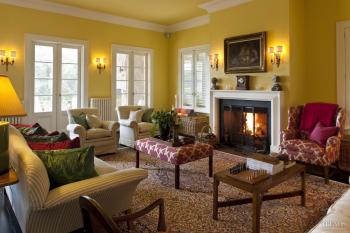 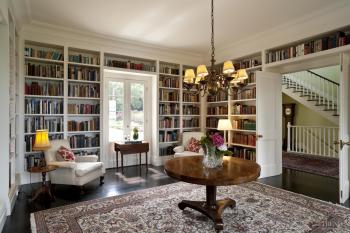 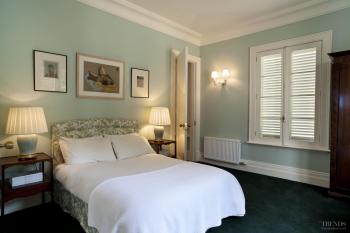 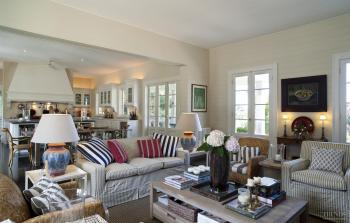 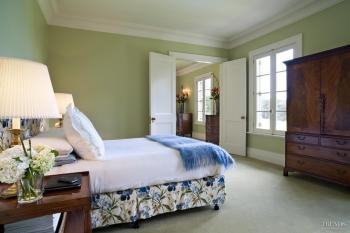 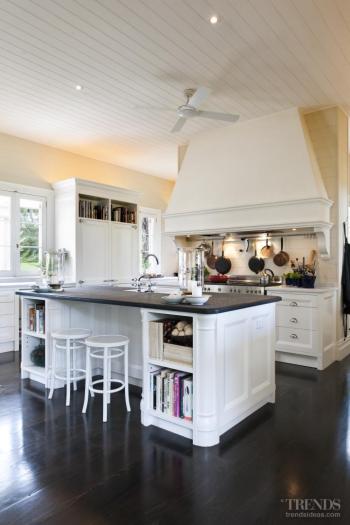 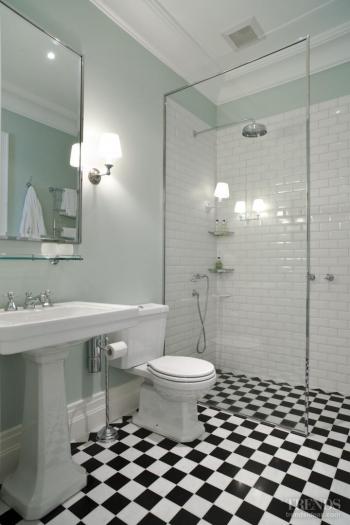 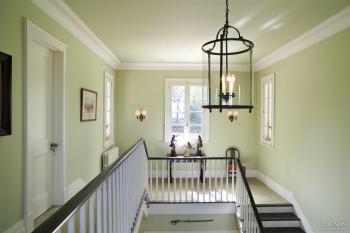 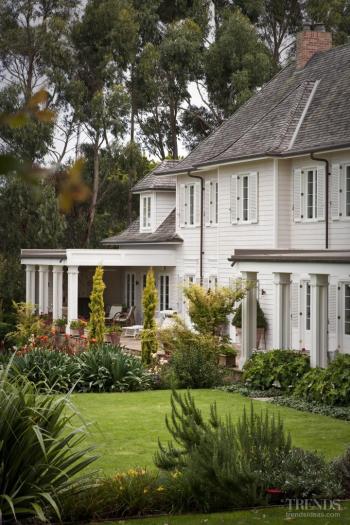 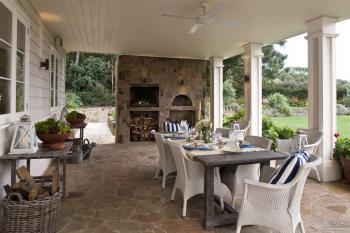 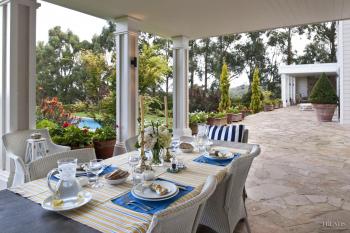 "The style of the house can be interpreted in different ways," Akehurst says. "There is a distinct European influence in the symmetrical elements, but the shingle hipped roof is a little more Northeast American. I didn't set out to replicate a particular style. Rather, I put together traditional elements to make a pleasing composition. For example, a Northeast American house would have double-hung windows, but I opted for casement windows."

The architect says he chose materials that quickly age to create an attractive patina, so the house looks as though it has been there for many years – the roof shingles were already weathered before the house was finished.

The interior reflects a more modern design approach in terms of the layout and flow. The central part of the house is just one room deep, with wide openings between rooms creating an easy circulation.

"I don't particularly like hallways, so I effectively did away with them on the ground floor," says Akehurst. "I like the traditional European sense of an enfilade of rooms that open into one another."

The architect says the decision to make the house one-room deep was also influenced by the need to ensure that the library, sitting room and family living room could benefit from the sea views in one direction and the sun in the other.

Double doors lead from the spacious entry hall to a library on the right. Another wide opening leads from the library to the sitting room, which in turn opens to a gallery and two bedrooms with ensuite bathrooms. On the other side of the entry hall is the family living room and kitchen.

"The right side of the entry could be classed as the more formal side of the house, but I prefer to call it the quiet zone," says Akehurst. "People nowadays don't have much call for formal rooms as such. The library and sitting rooms are simply places where people can get away from the more social family living areas. Because this is a country house, there are often guests staying, and these rooms provide an alternative place to relax and enjoy a little peace and quiet."

The decor of these rooms, co-designed by Adrian Cannata, also reflects their role. Yolk-yellow walls in the sitting room echo the autumn colours of the landscape, making it a cosy, inviting space. The family room has a more summery feel, partly due to the white-painted wood boards that line the walls and ceiling.

"In summer, the window shutters can be closed to provide a wonderful filtered light," says the architect.

The kitchen follows the traditional styling of the architecture. Akehurst also reinterpreted the idea of an old-style scullery, hiding the clean-up area behind a central island element housing the cooking centre and storage cabinetry. The cabinets were handpainted on site to ensure they will gradually acquire a patina over time.

The family room opens to a sunny terrace at the front of the house. And both the family and sitting rooms open out to symmetrical loggias and a large terrace at the rear of the house, which features local Castlemaine stone laid in a random pattern. There is also an outdoor barbecue and a wood fire for cool evenings.

The upper level of the central volume of the house accommodates the master suite, a large study and a media room. In keeping with the architect's desire to provide a degree of separation, a guest suite and private sitting room are positioned within the attic floor of the wing on the right side. These rooms are accessed by a separate smaller staircase – much like a traditional European or English country house.