In an urban context

In an urban context Discover this article's resources 0

In any large city, with the possible exception of some heritage-listed European centres, the skyline is an ever-changing backdrop. Traditional landmark buildings are often dwarfed by new developments that take on their own significance in the urban landscape. But with the right planning, there's a place for both the old and the new. And in many cases, it's the new architecture that helps reinforce the original vision created by the city fathers.

Tower 5, a new Melbourne apartment building developed by Mirvac, is a good example. Sited at Yarra's Edge – Mirvac's 1.5km-long riverside development in the Docklands precinct – Tower 5 sits at one end of the Flinders Street axis. Mirvac design director Anthony Pie says the tower's prominent position, 40-storey height and dramatic architecture make it an urban marker for the rest of the city.

"The grid layout of the Melbourne CBD extends along the Flinders Street corridor, with the building effectively forming a node on this axis," Pie says. "Right from the outset, we determined that the tower needed to have an urban form, scale and orientation that would acknowledge this context – and the site's relationship to the Yarra River. Mirvac wanted a highly articulated sculptural form that would respond to both the urban and waterfront elements."

Pie says it was essential that the tower be oriented to the north, to maximise the city and river views as well as the sunlight. It was also imperative that there was no overshadowing of key external spaces.

"The design needed to activate and enhance adjacent urban spaces, maintaining the waterfront promenade experience and theme," he says. 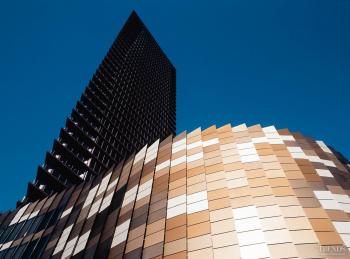 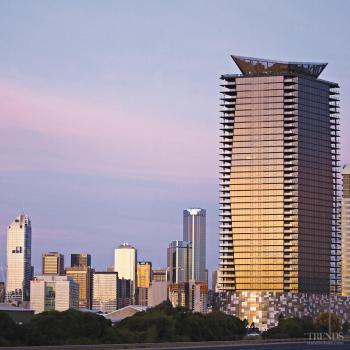 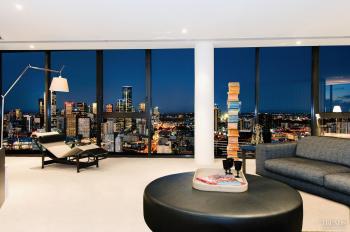 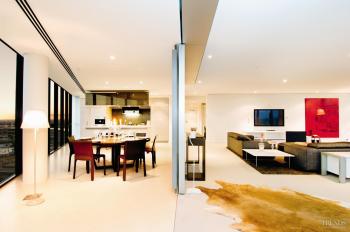 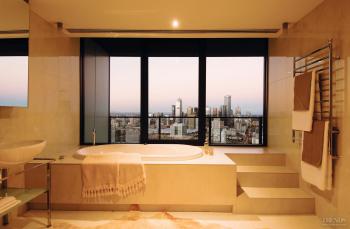 Designed by Wood Marsh, the building comprises two key elements – a five-level podium and a 35-storey tower block. The organically formed podium, designed to represent the city grid and the river bank, has a sculptural, serrated skirt of tinted glass and anodised aluminium sheets. These oscillate vertically to create a continuum of rhythm.

"The curvilinear form of the podium also responds to the bend of the river's edge, and was designed to provide a fluid transition between the angular geometry of two towers – Tower 5 and the proposed, neighbouring Tower 6," says Pie.

Tower 5's sharp-edged, diamond-shaped tower has an inner form of glass, subtly sculpted to reveal a bronze torso to the Flinders Street axis. The top of the tower is truncated away from the axis, culminating in a crown of bronze blades that conceal the roof plant room.

At ground level, the building's glazing is set back from the podium facade to create a protective walkway to the multi-use spaces, and to the building's entries. The riverside entrance is further highlighted by an undulating coloured-glass wall that provides a sense of fluidity, helping to visually connect the building to the waterfront. It also helps provide a human scale to the entrance.

"The glass wall is another highly sculptural element that complements the exterior architecture," says Pie. "Its sunset colouring, which was partly inspired by a painting in the lobby, adds a splash of brightness to the public spaces in front of the building. It also serves as a wind break."

In keeping with the bold exterior architecture, the lobby has a streamlined, high-tech feel, enhanced by a series of polished stainless steel shrouds that wrap around the structural columns.

"The shrouds play up the irregularity of the size and shape of these columns," says Pie. "Similarly, we worked with the irregular diagonal pattern of the ceiling beams, by adding a few more cross beams and painting the entire ceiling in a matt black finish. While we were not trying to hide or highlight the ceiling, we did want to take it out of focus. The black finish makes a very dramatic contrast to the polished white terrazzo flooring."

Other features of the lobby include a shimmering silver-leaf wall to the right of the entrance. The wall is highlighted by a backlit sculpture that takes the form of an angled beam, which helps to visually link the outside entrance with the public foyer and lobby.

The apartment interiors provide contemporary, open-plan living spaces, with floor-to-ceiling glazing maximising the extensive views. The penthouses, shown on these pages, incorporate an operable wall, which enables residents to separate the kitchen and dining spaces if required.

"We were very aware of the need to allow for lifestyle flexibility," says Pie. "The living spaces are also designed to have an easy flow, and every apartment has a large balcony."