Creating a successful interior from a myriad of elements may seem like a major undertaking. But with a few simple design principles and attention to color and texture, you can bring unity to any decor.

This stone residence with a classical exterior was designed by architect Robert Gibbs to look as if it is over 150 years old. Interior designer Susan Brown and William Lesterhouse were asked to create an ornate, traditional interior – for what is in reality a brand new home.

"Houses can evolve over time, with later additions bringing different nuances, and that is the concept behind this project," says Brown. "The predominant style is 1850s, built up with period detailing, furniture and finishes – but several rooms have a 1930s ambiance. As a result, the interior suggests not one history, but two."

The entry hall, living room, dining room and two of the bedrooms have the sensibility of the earlier era, and the family room, master bedroom and kitchen are 1930s in style.

The materials and texture of the floors are central to this concept. Distressed walnut floors are used to imply older rooms, while wide-plank oak floorboards indicate the newer spaces. All the spaces have the sense of being well-used and lived in over the generations. 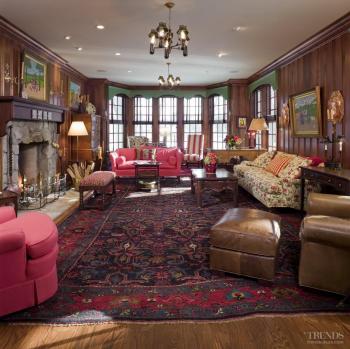 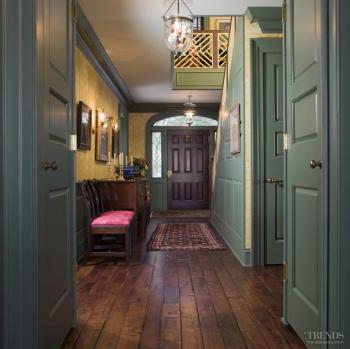 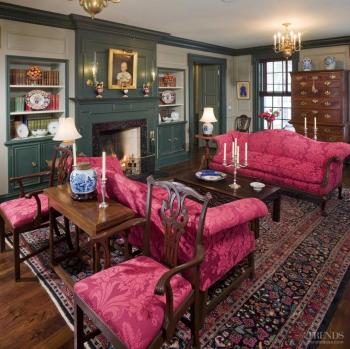 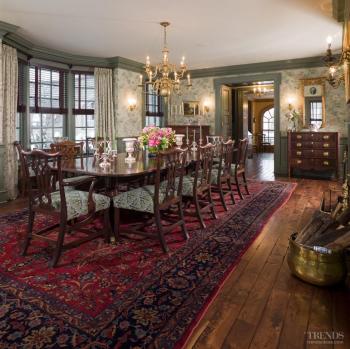 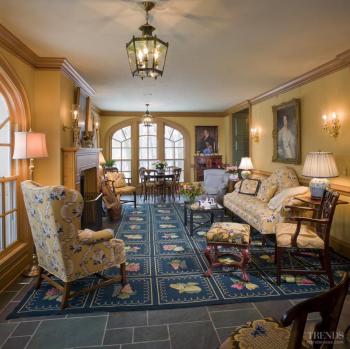 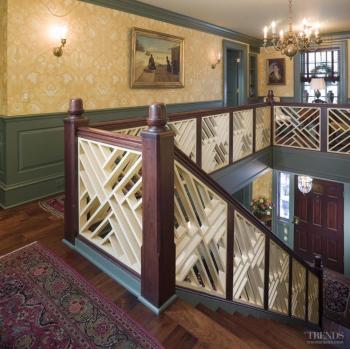 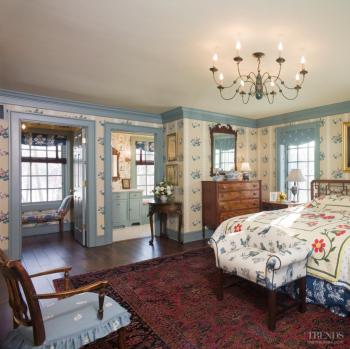 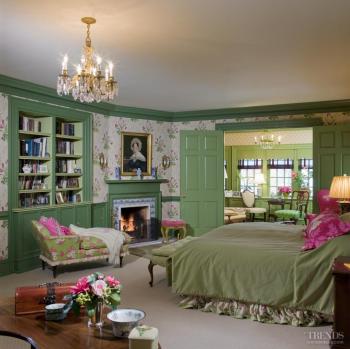 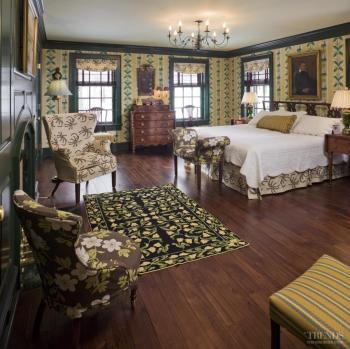 Color impacts on the interior in two ways, says the designer. With a diversity of hues and patterns in the wallpapers, furniture treatments, carpets and curtains, the wall colors form a backdrop and are integral to the overall look.

"I wanted the tonal range to show the passing of time over the entire interior," Brown says. "I call this a tea-stained effect – as if everything has yellowed slightly after years of sunlight and use."

For this reason, ceilings are all painted cream, rather than white. Subtly different base colors are used in different rooms. While all undercoats are in a deep-red tonal range, no two are exactly the same. Dark blue-green surface colors are in keeping with both periods and complement the furnishings. Finally, a coat of sepia lacquer was applied.

"We rubbed off touches of top coat while it was still wet, to reveal glimpses of the base color beneath," says Brown. "This effect can be seen in places such as window sills, where frequent setting down of cups or glasses would have been likely to wear the paint surface thin."

Nearly all the furniture is older than the residence itself. Pieces are original or refurbished antiques, or they are designed to look like furniture of the time. Almost no two pieces match, but similar tones and patterns bring all of them together.

"I chose antique Turkish rugs for most rooms," says Brown. "The complex tones and patterns form an appropriate grounding for these highly detailed spaces."

Brown says that she didn't pick out key fabric colors to match carpet elements exactly, or anything else for that matter.

"Matching colors exactly can seem contrived, and I wanted the interior to look like a collection built up over time. Instead, I used scale – of the patterns, or of the furniture itself – to draw elements together," she says. "Naturally, as many pieces date from a similar time, they share the popular colors of the day."

All the interiors reveal painstaking craftsmanship. Detailed moldings in the living areas and halls are made up of 12 different wood elements. Similarly, ornate Chippendale woodwork in the Chinese style graces all the balustrading.

"We made extensive use of handcrafted materials to imply the care and patience of times gone by – particularly in the 1850s rooms," says Brown. "Yellow Zoffany wallpaper lines the hallways. Leaded glass frames the front door entrance and needlepoint seat covers, typical of the era, feature on the Chippendale dining chairs."

Lighting also plays an important part in the overall ambiance. In the older period rooms, ornate chandeliers are suspended from the ceilings. The family room, one of the newer living spaces, is lit by the soft glow of gas lamp-style luminaires.

"In these 1930s rooms, I also wanted to create the appearance of age. In some cases, some lateral thinking was needed to achieve this," says Brown. "I specified a slate floor in the sunroom, for example, but found the grouting was too bright. We applied coffee grounds – not tea – as an antique wash to the entire floor to achieve the desired effect."

The final result shows how successful a grand mix of materials and eras can be.