More modern lodge than traditional business space, this office is the winner of the Trends Commercial Design Office Awards

Many business people will agree that the best deals are struck while they are entertaining their clients. There is something conducive to doing business in an environment where pleasure and comfort are seen as a priority.

This was exactly what the owners of these offices had in mind when they approached interior designer Stewart Harris of Martin Hughes Architecture Interiors.

"The brief was for an aesthetic that was distinctly non-office-like – more a modern hunting lodge than a traditional place of business," says Harris. "We started with a blank canvas – which meant we could create a design and specify materials not usually associated with your typical office fitout."

The space is split over two levels – a mezzanine level and a lower level directly below – both of which open onto a grand, double-height atrium.

The offices are designed around these three distinct areas – the public atrium or entertainment area, the public entrance and office space for the administrative staff on the lower level, and the mezzanine upper floor – home to the directors, with its own entrance and reception. 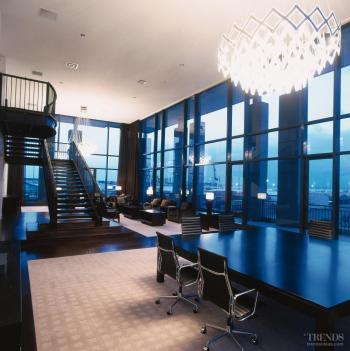 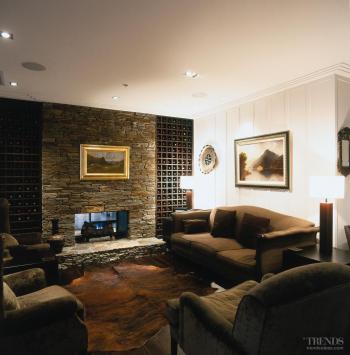 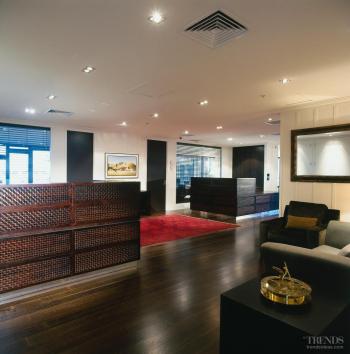 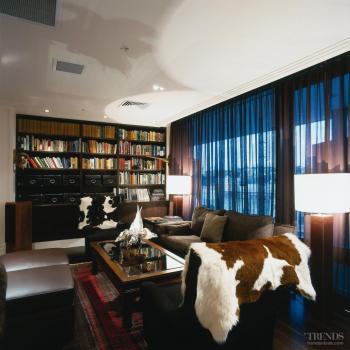 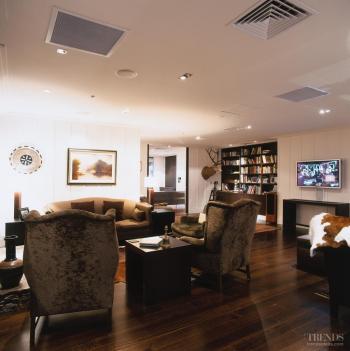 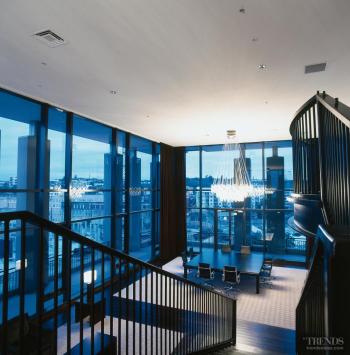 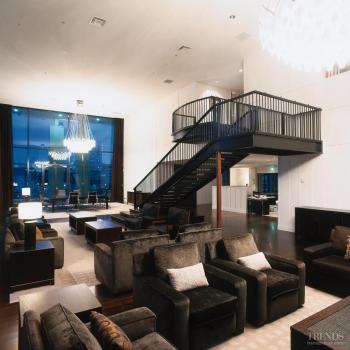 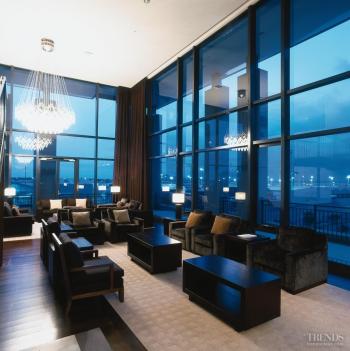 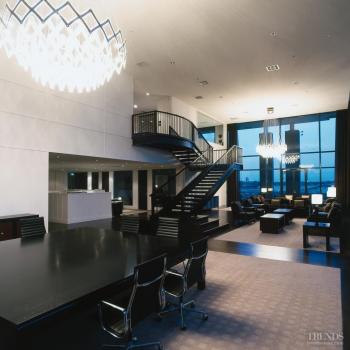 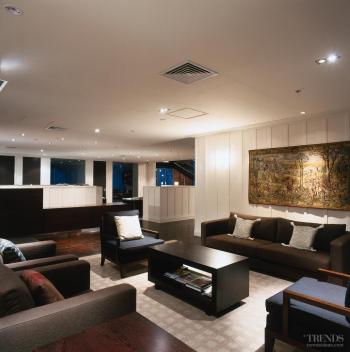 "Initially, the directors wanted to situate their offices in the atrium, with it's full-height glazing. But the grandeur of the space was better suited to public use and meant staff and clients alike could enjoy the spectacular views down over the waterfront," says Harris

This lodge aesthetic is immediately apparent from the moment you enter the upper level.

The deliberately discreet entrance – only for clients and friends in the know – opens onto a floor-to-ceiling schist wall, a double-sided fireplace and a mounted stag's head. These archetypal hunting symbols set the scene for the rest of the office.

The executive office pictured here is one of three, and is very much in the style of a country gentleman's private rooms. Polished wooden floors contrast with white baton-and-board lined walls – harking back to the rough and ready materials of New Zealand holiday homes.

The space is furnished with custom-designed, wing-back chairs and sofas, upholstered in a palette of chocolates and rusts. Animal skins are draped over chairs and dress the floor alongside richly coloured oriental rugs. Traditional landscapes and mounted game animals decorate the tables and walls.

"The concept was a collaboration that married the objects the client had previously collected, and will continue to add to, with a design that re-inforced the feeling of the cosy den of a collector and connoisseur," says Harris. Book-laden shelves, a fine wine collection and well-stocked bar, and the double-sided schist fireplace all contribute to this.

The intimate, eclectic nature of the directors' floor opens out into the splendour of the atrium. A custom-designed, steel staircase sweeps down into a vast area set up for entertaining at one end and equipped with a generous glossy black meeting table at the other.

"Steel was specified for it's hard, raw properties and to create a link with the cityscape and wharves below," says Harris. "Initially the plan specified the stair projecting straight out through the middle of the space, but we redesigned it to avoid cutting the space in half."

The rich brown tones of the upper level offices are carried through in the furnishings here.

"Brown adds drama rather than the power of black that is more commonly associated with business," says Harris. "The walls are deliberately in soft whites to minimise any stark contrasts."

The lounge-style furniture is arranged to facilitate two-to-three seating areas, so meetings can be held simultaneously, but discreetly. The contemporary chandeliers at each end of the space further emphasise the association with the style and comfort of an upmarket bar or hotel, where pleasure and entertaining is the priority, but here there's the added privacy offered by a traditional office.

The downstairs public reception area opens onto the atrium, allowing visitors a tantalising glimpse of the view as they enter. It features the white baton-and-board wall panelling, but here it is also wraps around the reception desks. The same warm tones and residential flavour are evident in the reception's waiting area.