How to achieve an architectural home design on a modest budget

Cedar cladding, a large double-height living space and strong uncomplicated lines are features of this new home in a bush setting

The complex balancing act between meeting a budget and your quality of home and lifestyle starts right from the outset. When architectural designer Cameron Grindlay drew up the plans for this home he engaged a quantity surveyor to ensure the design was affordable, and so viable.

"The budget influenced the evolution of this house in several ways," says Grindlay. "The bush-covered site is a generous 3000m2 but the ground slopes away steeply, with only about 400m2 of buildable land in the area where the owners wanted the home."

With feasibility assured, Grindlay designed the home's garage area to sit on a concrete slab on the buildable area, but set much of the rest of the home on poles. This was not just an affordable construction method, it also allowed for sheltered storage space under the house.

"Designing an architectural house on a close budget requires strategic choices along the way. Part of the principal here was to spend more on prominent features and slightly less where things were of a lower emphasis," says Grindlay. "The warm-look cedar cladding was not cheap, but it sets up the character of the whole home, not to mention being in keeping with the setting. Balancing this natural surface, we used affordable black metal roofing material on the street-facing facade and in a different treatment on the double-garage door."

The house is set well back from the street and while the garage end is the first glimpse you have of the home, when you're actually there and out on the generous deck it's the cedar-clad, articulated side of the home that's on show.

Another leading aspect of this house is the window design and the glazing itself.

"The windows were an important part of the design, look and function of the home. With such large expanses of glass, we had to be savvy about heat control. As a result, the window systems feature above-spec thermally broken frames, and Low-E double glazing."

Grindlay says the close attention to design detail further animates the facade. Elements like having windows stepped in from the cedar or a full-height run of vertical cladding separating glazing panels all adds interest.

The driving concept of spending most of the budget where it will have the biggest impact is continued inside. The airy double-height living, dining and kitchen space is the hub of the home and so is naturally where the most time is spent.

"It required additional reinforcing to achieve this grand double-volume space, including the use of steel portals. This is all hidden away in the walls except for one point where it surfaces outside, under the roof line. In that instance, we clad the structural beam in cedar, so it disappears completely – keeping the cladding simple in cedar and black metal."

And the cedar cladding is celebrated on the inside too, with boards rising right up to the ceiling in the double-height living space.

The kitchen is a feature within the living space and is finished in warm plywood and white laminate to connect with the surroundings.

"White and wood are predominant colours in this space – with so much colour beyond the windows it was better to leave the interiors understated, to bring the outdoors in."

The architectural designer's heating solution for the home was another economical measure.

"We considered a heat pump but in the end decided upon an over-size woodburner for the living area with a wetback next to it," Grindlay says. "The system is linked to radiators in the modest bedrooms." 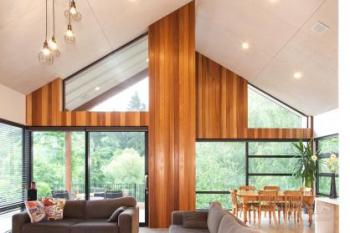 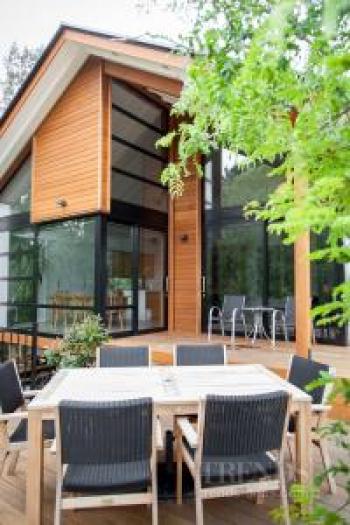 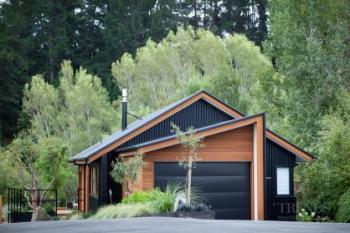 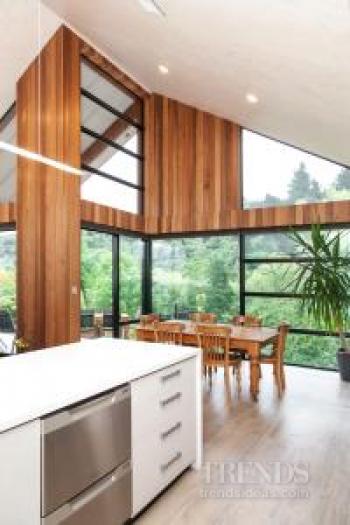 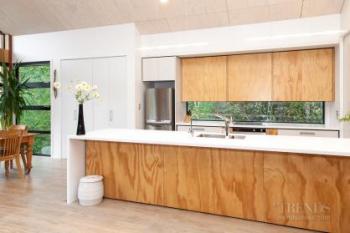 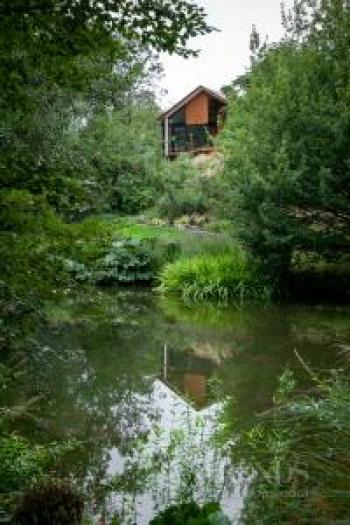 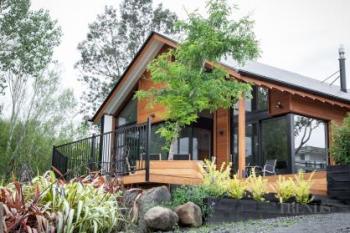 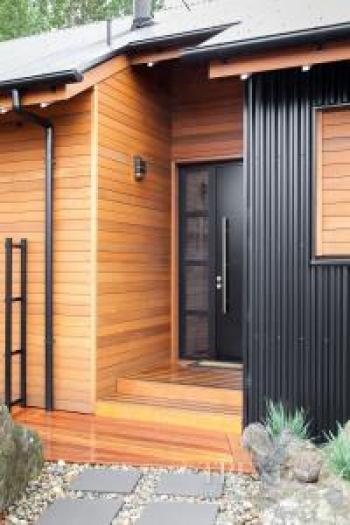 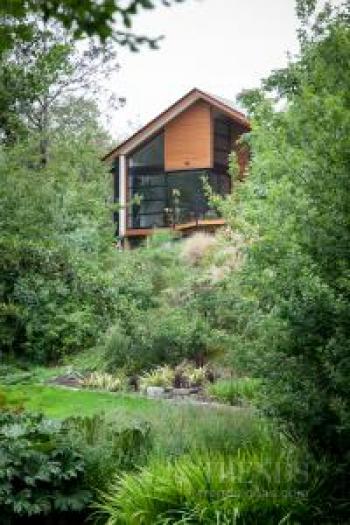 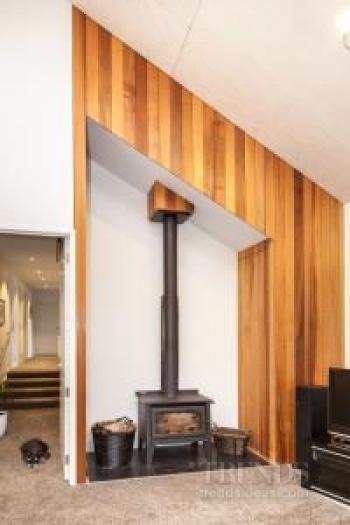 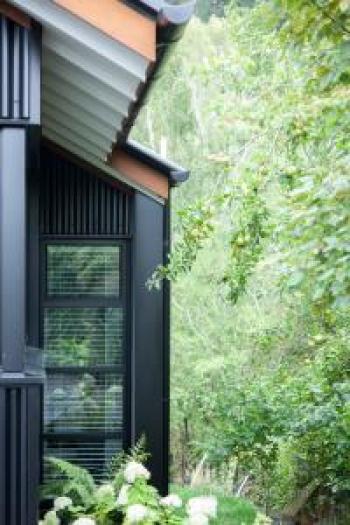 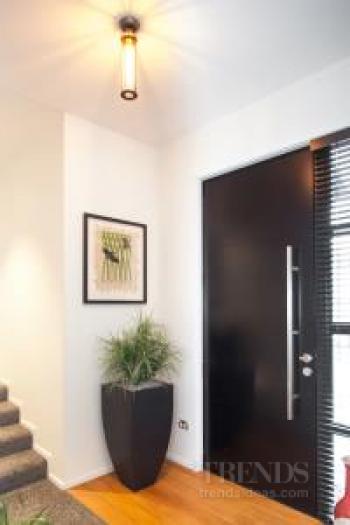 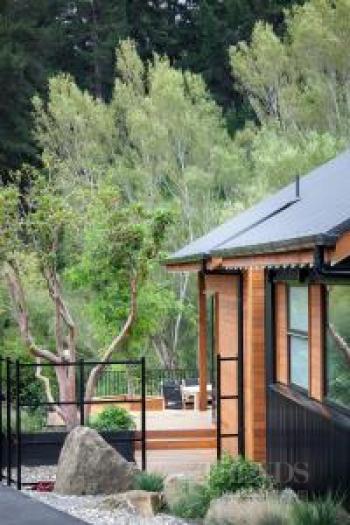 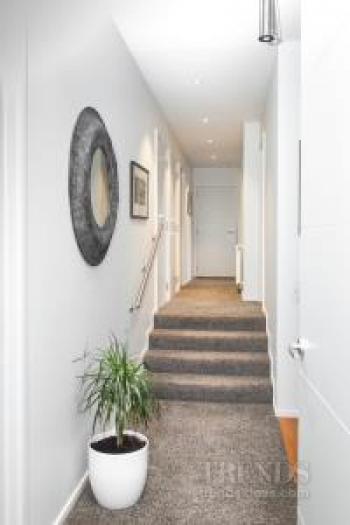 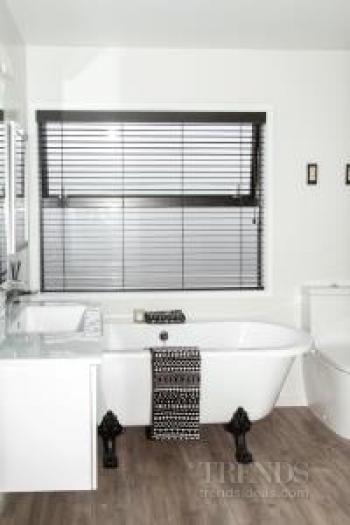 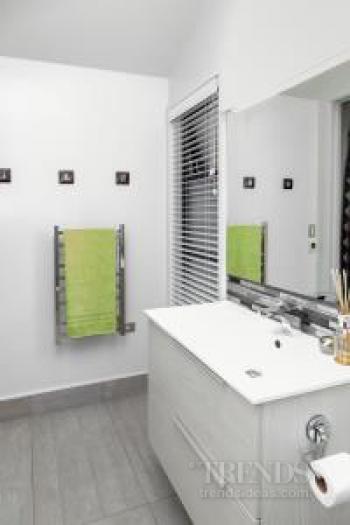