With its deep balconies and covered terraces, this house is a contemporary interpretation of a traditional inner-city Queenslander

Houses built around the turn of last century may have been wanting in terms of modern convenience, but in other ways their design is still a blueprint for comfortable living.

The traditional Queenslander is a case in point. Long before air conditioning was an option, these houses were designed for the tropical climate. Large verandas and ample cross ventilation were just some of the features considered essential.

It's a concept that architect Scott Peabody of Planit Architecture applied to the design of this inner-city Brisbane house, which he describes as a contemporary interpretation of the traditional Queenslander style.

"The archetypal Queenslander vernacular provides screening for shade and privacy with deep overhangs," he says. "These houses also breathe very well, and this was the essence of what we were trying to achieve – to have a cool breeze through the home."

Opening up the front of the house to large covered terraces and balconies was not only a way to provide a shelter break from the sun, it was also a way to maximise a great view, and provide a connection between the interior and outdoor living spaces, Peabody says. 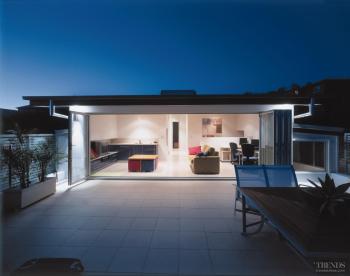 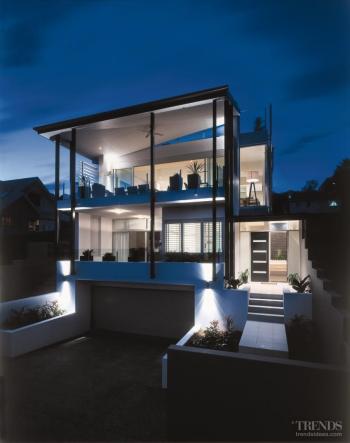 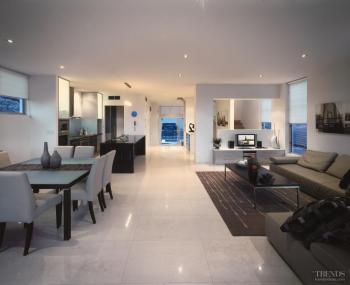 The provision of outdoor living areas on three levels was made possible by the sloping site. As with most inner-city sites, this 400m2 lot was subject to strict building codes, including an 8.5m height restriction.

"By following the topography of the land and stepping the house up the slope, we were able to provide four levels, while keeping within the height restriction," says Peabody.

The narrow shape of the site meant there was a need for privacy from close neighbours. Here, again, Peabody borrowed from the archetypal Queenslander, designing aluminium batten screens that run the length of the house on either side.

"In a traditional house, there would be timber louvres and lattice work. This is a reinterpretation of that screening," he says. "Although there are a lot of windows, there is a veil of battening – a deliberate layering of materials. This not only provides privacy, it also screens the harsh late-afternoon sun."

For owners Dan and Janet Williams there were other essential design requirements. As parents of older children, they wanted separate, independent spaces for themselves and the rest of the family. But they also wanted a living area where the family could come together.

"We also needed to consider the time when the children are no longer at home," says Dan Williams. "We didn't want to be left with a sprawling house."

The solution was to position the master suite and office on the first level above the basement garage. The next level accommodates the main open-plan living space, and includes an outdoor living area and pool at the rear of the house. The top level, which incorporates a roof terrace, is the children's space – a place where they can entertain friends out of sight and earshot of the rest of the family.

At the front of the house, the main level opens to a balcony with an asymmetrical overhang. This design provides a visual connection with the roof terrace, ensuring the two living spaces are not entirely cut off from one another.

"Transparency is a key feature of the design," says Peabody. "The topography of the site, and the fact that the house is not all on one plane or a conventional two-storey box, has allowed us to explore the building's three-dimensional nature."

An open stairwell, for example, visually connects the different levels.

"The stairwell winds its way through the house, heading in different directions and opening up the views through the interior," Peabody says. "Glass walls and large cut-outs further enhance the transparency and bring natural light into the different spaces – the entire house is very light and bright, and it works because of the layers."

Despite the open-plan layout, the different spaces within the main living area are well defined. Steps help separate the more formal living area from the informal living space that opens to the pool. And a large entertainment centre provides a degree of separation from the stairwell, while still providing a visual connection.

The sharp, modern lines of the house are reinforced by the kitchen design. To avoid excess clutter, some utilities have been tucked away in a walk-in pantry, leaving the cooking centre and coffee machine on show.

"The owners love to have dinner parties, and the kitchen is a social hub for guests and family," says Peabody.