Ironically, a kitchen in a holiday home has to work as hard or even harder than the kitchen in the main home. Nowhere is an approachable, multi-user, multi-function design more essential than when friends and family muck in together and where cocktails, coffee, or crayfish might all slide across the same bench in quick succession.

This kitchen in a beachside holiday escape is tucked into the eastern end of the home's main living area. Architect Paul Clarke says this position makes the most of year-round morning sun, and offers an easy interaction with other living zones and a direct connection to the beach.

"The owners loved the look of American white oak which features prominently on the walls, floors, and ceiling of the beachhouse," says Clarke. "So we chose this finish for the kitchen cabinetry, too – but using an American white oak veneer rather than solid planking. We designed the island pendant in the same wood."

While the American oak veneer cabinets merge in with the surrounding surfaces, the wood is dramatically contrasted by the crisp white of the engineered stone waterfall island benchtop and the splashback in the same stone. Seen together, the two materials give the kitchen a light, natural Scandinavian sensibility that was ideal for the beachside location

Another appealing contrast in the kitchen is seen in the treatments of the two benchtops. The cantilevered island benchtop is chunky, in part to conceal its support structure, while the rear prepping benchtop is slender and in durable, easy-to-clean stainless steel. 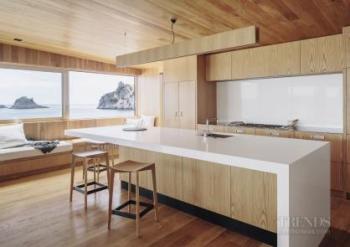 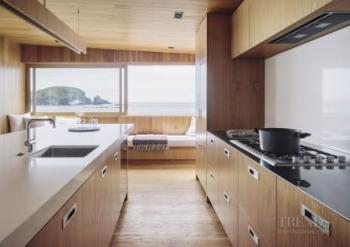 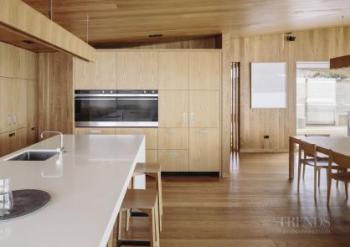 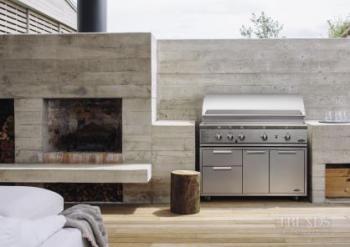 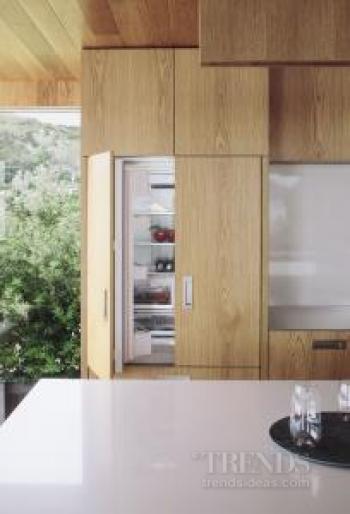 With extended edges on the bottom of some cabinet doors acting as pulls, only lower doors and drawers have handles proper, adding to the kitchen's pared-back, minimalist appeal.

Behind the simple cabinet faces lies a wealth of storage. The main refrigerator is fully integrated to the left of the rear benchtop and a compartmentalised pantry with a pocket door is to the right.

The side cabinetry wall includes an appliance garage and a television that extends on an arm. A wine fridge, refrigerator drawer and rubbish bin are all on the business side of the island.

And the kitchen seamlessly merges function and form in other ways, too. A discreet air conditioning grill is integrated into the deep island toekick, for example, and the extended under-window bench seating holds even more storage.