While building a home on the crest of a hill gives the opportunity to make the most of the surrounding views, there can also be potential disadvantages – such as the lack of privacy that may result from being in such a prominent position.

Addressing that concern was a key factor that architects ARRCC needed to consider when designing the home featured here, along with the challenges presented by the extremely steep site.

"But the owners are very private people so the design had to allow them to open up the house and live outdoors without people being able to see them from the street side," she says.

The solution was to lay out the house in an L-shape, with cantilevered concrete elements to give it strong sculptural form. Tucked in between the arms of the L, an organically shaped pool creates a strong contrast to the home's two rigid wings. 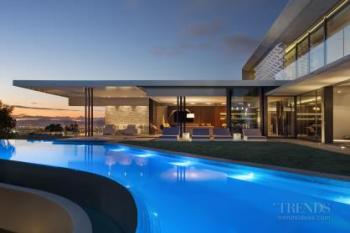 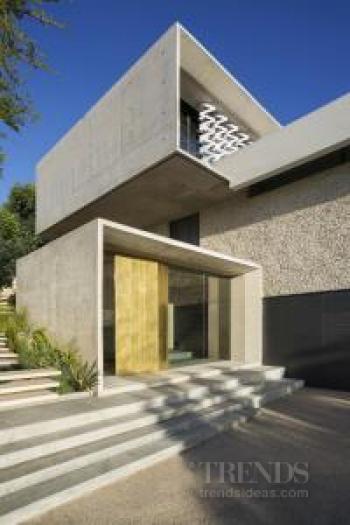 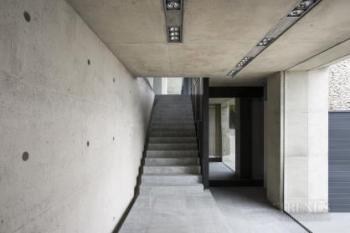 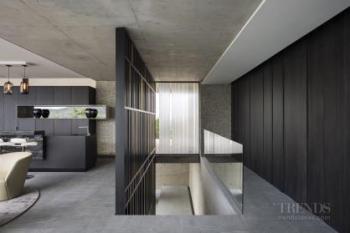 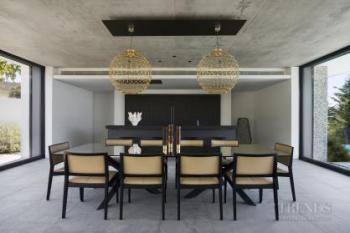 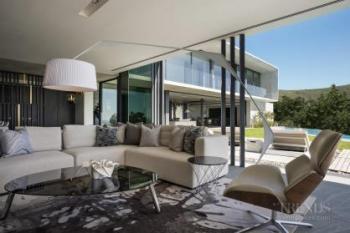 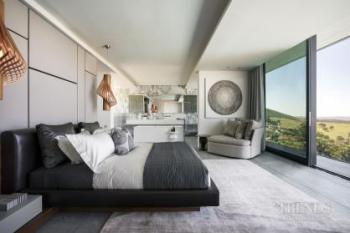 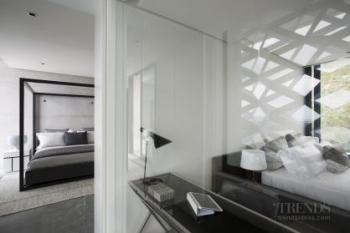 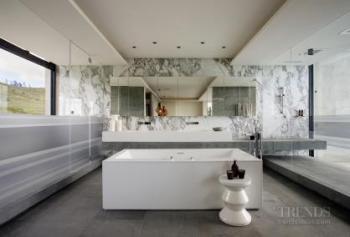 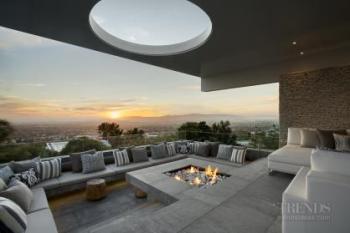 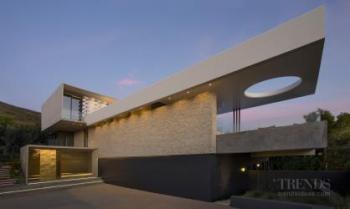 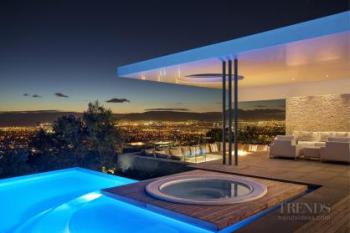 On the street side, the house presents a deliberately blank facade, concealing the indoor and outdoor living areas from public view.

"At the same time we dropped the garage level by two metres, which reduced the steepness of the driveway, so as to allow easier access for the owners' sports cars," says Rhoda.

"The garage doors are made of dark aluminium and this same material is used to clad the whole wall at this level, so the doors effectively disappear from sight."

The steepness of the site also allowed the architects to split the house into three floors – the basement garage level, the living areas and the bedroom wing, which forms the top floor on the long arm of the L.

The entrance cube and bedroom level are constructed of raw shuttered concrete, which is softened by the use of a natural stone cladding for the wall between them that shields the living areas.

A white, geometrically shaped screen installed on the upper level adds patterned textures to the exterior. Like much of the design of the house, this screen was inspired by Japanese architecture and culture – incorporating transparency and using materials in unusual ways.

"Although this is a screening device for the bedrooms, it still allows natural light in and access to the views. And while it's made of heavy, solid steel, it looks quite flimsy, like origami," says Rhoda.

The use of shuttered concrete continues on the interiors for the ceilings, while natural granite tile is used for flooring throughout the house.

"We've kept the colour palette neutral and monotone, so the interiors are quite masculine. But there are some contrasts such as white walls and the use of dark stained oak for joinery, wall cladding and the kitchen and bar cabinetry."

The concept of transparency applies to all the living spaces, which are essentially glass boxes that can be fully opened up.

The main living wing containing the kitchen, dining and living spaces has five full-height sliding glass doors on both sides.

"We used the biggest door panels we could find, and these can pocket right out of sight into the thick walls on either side of the kitchen. The beauty of this site is that from inside it opens up to a nature reserve at the back and the city views at the front."

On the upper floor are three double bedrooms, as well as the master bedroom – all enjoying city and mountain views. The double bedrooms each feature an ensuite bathroom within a glass box, while the master bathroom has an open plan layout with a freestanding bath and a large, glass encased shower overlooking the city.