In this historic renovation, a powder room with a theatrical interior is concealed behind a door hidden in the panelling

Perhaps more than any other space in the house, powder rooms can evoke a sense of the unexpected. Often making use of an awkward corner of the house, these small spaces offer architects and designers the opportunity to experiment.

This was certainly true for this powder room, which is positioned out of sight under the stairs in an historic 1920s homestead.

Simon Novak, of Novak and Middleton Architects, says that the homeowner wanted to use the space in an intriguing and humorous way. The initial idea was to cover the walls and ceiling with mirrors, for a funfair-style atmosphere. This was scaled down to a single floor-to-ceiling wall mirror, with other walls featuring a mirror-print wallpaper to create a similar effect.

The opulent, theatrical feel of the space is accentuated by a chandelier light. Fittings are kept sleek and minimal, with a basin tucked behind the door and a cantilevered toilet positioned in one corner of the room. A mirror and chair take pride of place as statement pieces in the limited space.

The interior designer and homeowner played with colour, introducing regal red and gold to the interior. 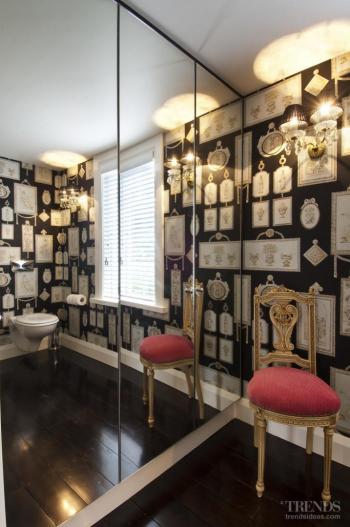 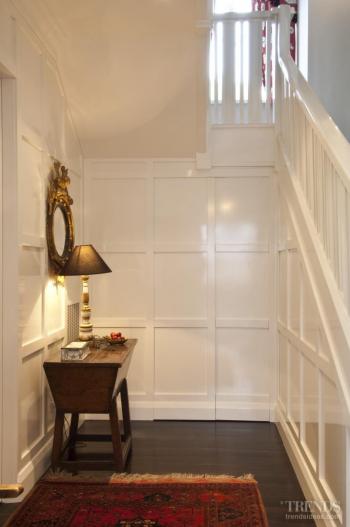 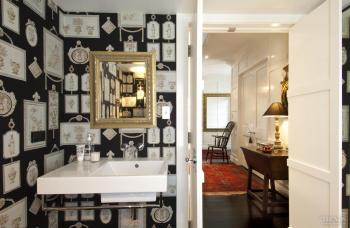 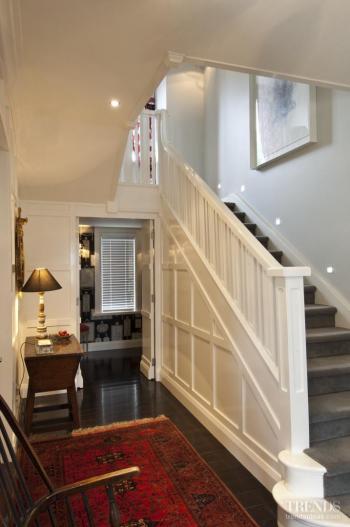 "We wanted the powder room to tie in with interiors in the rest of the house, but in this space we were more daring," says Novak. "We were able to play with colour and texture in a way that wouldn't have been appropriate in, say, the formal living room."

In line with the funfair concept of intrigue and surprise, the powder room is entirely concealed behind wooden panelling. This device is continued in the rest of the renovation, with panelling also concealing a pantry in the kitchen, an entertainment unit in the family room and even the study.

While the wood panelling in the house would originally have had bevelled edges, here the architect squared the edges to create a more streamlined and contemporary look.

"Because the powder room is so small and completely hidden away, we were able to be truly flamboyant," says the architect. "Guests have to look around for the door – then when they find it and open it, the space is revealed – it has a really dramatic effect."