Owners of a beachside residence often favor a quiet interior design to maximize the focus on the views. However, a more exuberant indoor aesthetic will leave everyone who enters spoilt for choice.

This apartment climbs three lower levels of an upmarket condominium complex in close proximity to a white-sand ocean beach. Created by designer Michael Wolk, the project responds to the client's request for a cool, spectacular interior.

"We had a strong starting point for this project as the condominium owner is also the owner of the entire complex," says Wolk. "Given his control over the development, we were able to suggest structural changes to the unit even as the tower was going up."

The most important rethink was to extend what was to have been a two-level apartment into three levels. This was achieved by cutting away half the floor from the apartment above and then combining the two spaces. While the first floor is a single-height volume by the seaside windows, further back in the apartment the space rises to a ceiling that soars 26ft above.

"Upon first entering the apartment, the volume makes an immediate impression – a wall of stone to the left and the glass elevator to the right lead the eye up through the expansive space," says Wolk. "The dimensions are accentuated by an open-plan approach to all the living spaces." 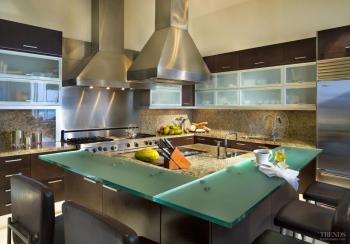 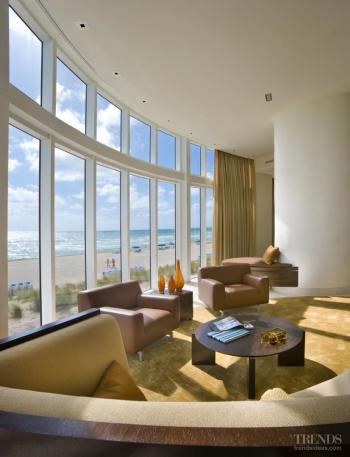 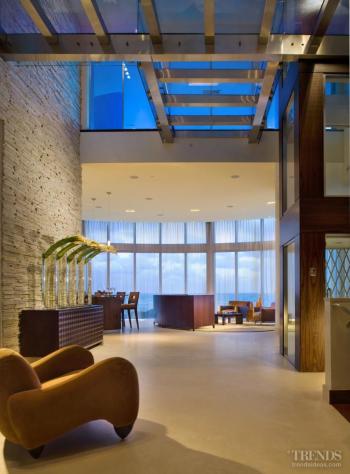 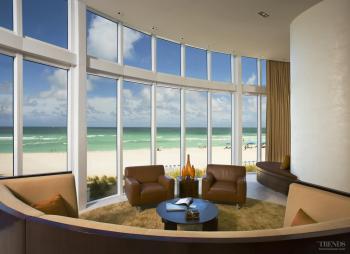 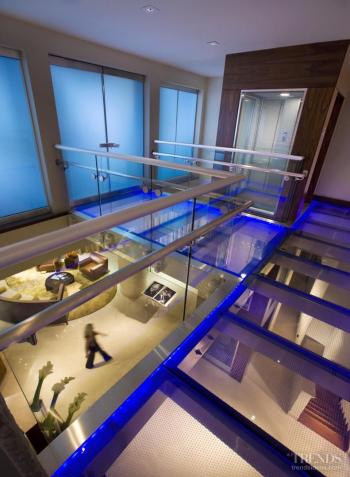 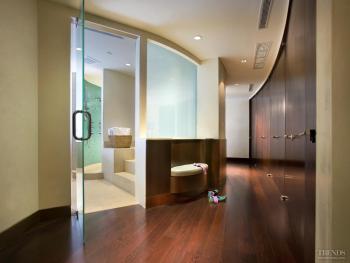 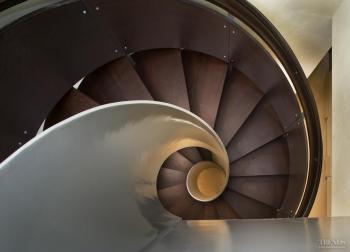 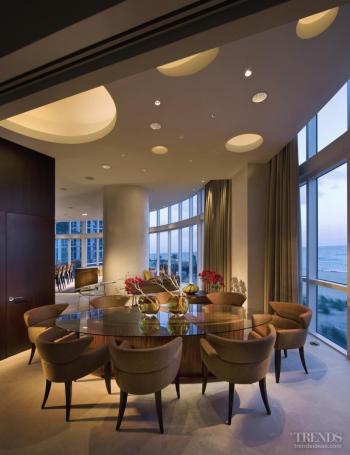 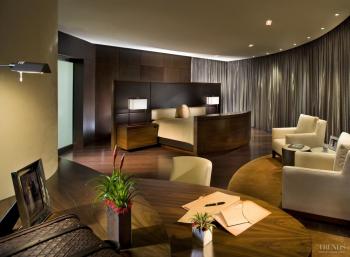 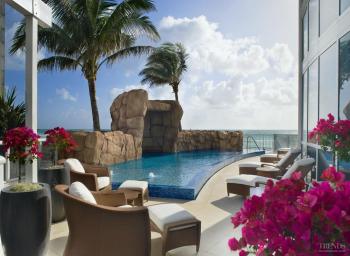 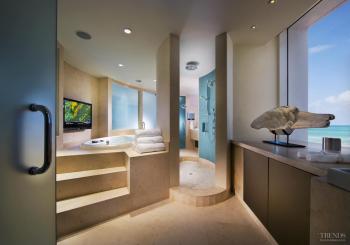 The only structural constraints on the design were the massive ovoid columns that rise through the interior and echo the shape of the complex itself. To minimize their substantial presence, Wolk custom designed elements such as banquette seating and desks around the pillars in both the first-floor living spaces and the master bedroom, working the columns into the design.

In terms of decor, both the materials and tonal palette accentuate the ocean setting. Sandy-hued limestone floors and area rugs are part of this, as is the atrium's giant rock wall.

However, while the interior ties in subtly with its surroundings in some ways, it has several features that rather stand out. Perhaps the most dramatic is the steel-and-glass bridge, accentuated with blue LCD lights, that allows the owners to feel as if they're walking on air as they progress from the elevator to the bedrooms.

"This futuristic element was inspired by a scene in the first Matrix movie where a glass bridge unfolds before the protagonist's feet," says Wolk. "To further the sci-fi feel and bring both privacy and natural light to the bedrooms, we chose high-tech glass wall panels that turn from clear to frosted with the flick of a switch."

Other surprises in the home include a Swiss-cheese ceiling that delineates and softly illuminates the dining area. Wolk says this is in the spirit of architect Morris Lapidus, who designed the curvy, flamboyant hotels that defined the 1950s Miami Beach resort hotel style.

Wolk is noted for his custom furniture designs as well as his interiors, and several of these are included in the interior design. For example, a chair sitting near the entrance, designed by Wolk, once featured in a Batman movie and is referred to by the owners as the bat chair.

"The master bedroom also has an individual air," says Wolk. "This room has no square corners, so furniture placement was driven largely by the views. Wood floors in this space provide a warm contrast to the cool limestone floors elsewhere in the condominium.

"Overall, the interiors blend an homage to the sea with a celebration of the out-and-out chic."