A giant atrium allowing for easy circulation of students and staff is a metaphor for the communication flow at the new Asian Institute of Medicine, Science and Technology

JUST AS office design has evolved to reflect the modern relationship between worker and workplace, educational architecture, that which accommodates the worker of tomorrow, is increasingly influenced not only by the academic curricula but the cultural background of those in attendance. Here the creative considerations for architectural firm Hijjas Kasturi Associates were complicated further by the handicap of a tropical climate.

The new Asian Institute of Medicine Science and Technology (AIMST) in the northern Malaysian region of Kedah, privately owned by the Malaysian Indian Congress, has been designed to cater for a 4500-strong student population, a figure set to rise to 7500 within the next five years.

"The first phases of AIMST were completed in a short, four-year time frame, and consist of the academic and administration core, faculty buildings for the three disciplines and separate student and faculty housing," explains project architect Serina Hijjas. "The university's sporting and recreational facilities have also been completed."

The campus is laid out in concentric circles, the central library, resource and multimedia centre situated on the innermost ring, flanked by the medical faculty and the science and information technology faculties on either side. On the opposite side of the radial plan lies the administration complex and great hall, connected by an imposing, glazed cylinder that rises through the roof like a deafening crescendo.

A circular network of roads connects the faculties, library complex and administration building around a central plaza comprising green fields and a reflective pond. 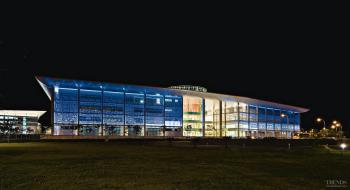 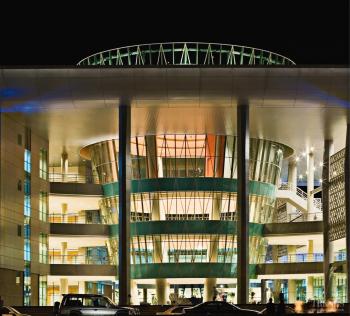 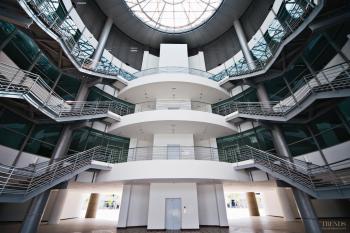 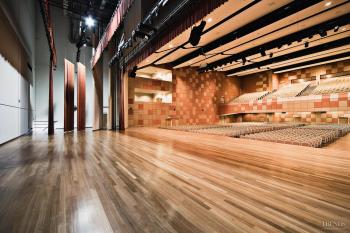 "The plan was laid out in the form of a traditional chakra, or wheel of knowledge, and additional faculties still to come will help complete this circle," says Hijjas.

Intelligent use of space around the campus not only provides for easy pedestrian access, but enhances student interaction between departments. All faculties are positioned within a 10 minute walk of each other, whilst all student housing is less than a kilometre from the academic core.

"Circulation and student interaction are central to the campus and reflect a growing trend in institute design around the world, towards cross-pollinating the various educational disciplines," says Hijjas.

Elements that contribute to this student interaction here, beyond the plethora of interconnecting walkways, include open walk-in areas under key buildings, the geographical placement of the shared library and multimedia complex between faculties and the introduction of generous-sized pedestrian ‘streets' within each building. But streets within buildings?

"An important differentiation between corridors and streets are that corridors are a means to an end, while a ‘street' might be considered a place to linger, as a social convening point in its own right," explains the architect.

This emphasis on social interaction is highlighted by, yet not confined to, the design of the AIMST library, resource and multi-media centre. Separate floors are all fed by the central core, which is flooded with natural light from an extensive skylight overhead. The library's broad, sweeping staircases at the heart of this are shared by all students in the complex, before they branch off to reach individual reference areas.

"The administration building's drum-like structure is another communal focus and forms the upper level entrance lobby for the great hall alongside it," says Hijjas. "One of the first things to be seen when entering the campus, this grand space, articulated through the roof, also houses the university senate conference and chamber rooms."

Immediately identified by its glass walls, this core linking structure reflects a wider use of materials to link and differentiate motifs throughout the campus.

"Horizontal external shutters, champagne-coloured aluminium cladding and extensive use of green glass provide a sense of continuity to the university's buildings," says Hijjas.

Further commonality is achieved through the floating roof structures, which also provide an architectural nod to housing design in Malaysia. On the lower facades, a granulated surface texture has been applied.

"This is partly to give the buildings an anchored feel," says Hijjas. "Although a sense of lightness predominates on all the buildings."

The open nature of the library complex and administration building's core areas ensures that this sense of light and space is emphasised inside as well as out. However given the local tropical climate, this presented Hijjas Kasturi with the conundrum of how to maximise the natural light without attracting excessive solar gain.

"While the campus buildings do have some traditional climate-driven architectural elements, such as overhung roofs, other approaches used to combat temperature extremes are more contemporary," explains Hijjas, who points to the library's central atrium as a working example.

"Here an even temperature is achieved partly through the reflective nature of the skylight, partly through strategically set louvres near the skylight that allow rising hot air to escape, and lastly through the open, walk-through nature of the base of the building that admits fresh air up into the interior," she says. "Similar principles were also used on the central structure in the administration building, although most enclosed areas of the campus are fully air conditioned."

Built to defer to the local environment, the university's location also plays a vital role in temperature control. The campus is set under the shadow of a hill, with faculty housing nestled into its slopes. This allows air currents to flow around the hill and across nearby rainwater retention ponds – all helping to keep the students cool under scholastic pressure.