Home makeovers are not just the prerogative of urban dwellers. This ‘70s-style country house presents a whole new outlook on life

There may be a certain retro value in the fads and fashions of the ‘70s, but this doesn't necessarily extend to residential architecture. Boomerang houses with clinker-brick façades and dark-painted rafters have had their day.

When the owners of this '70s-style farmhouse first saw the property, they could well have walked away. It had all the typical features of a house of that era – including a sunken lounge and kidney-shaped swimming pool – but it also had a spectacular view and was well positioned on a rise. In addition, the two arms of the boomerang shape created a sheltered outdoor living area. There were also stables and a hectare of rolling pasture.

Owner and interior designer Gen Hogg says she could see the potential of the site and subsequently commissioned architect Brent Hulena to design a major renovation.

Hulena says the house was quite squat on the landscape and the first priority was to make it relate better to the land.

"The two arms of the boomerang needed to be stretched out," he says. "Extending both ends of the house was a way to pull it out into the landscape and add visual impact." 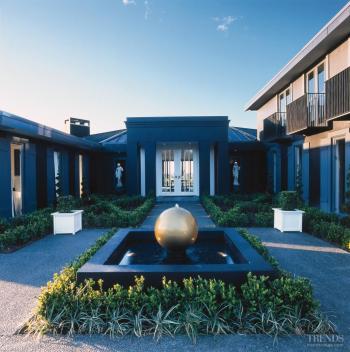 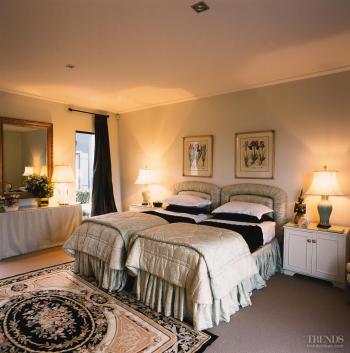 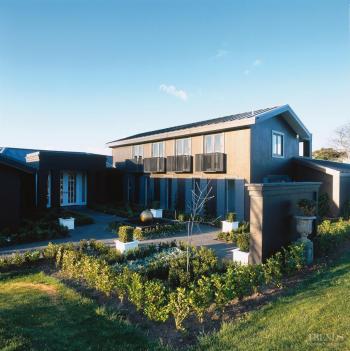 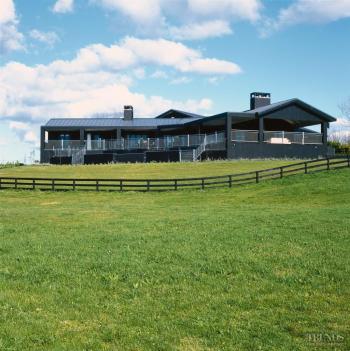 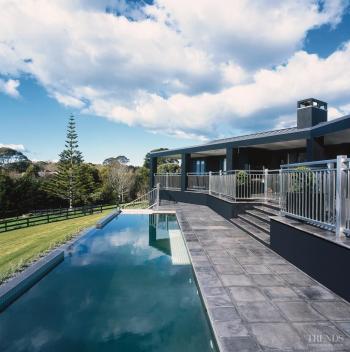 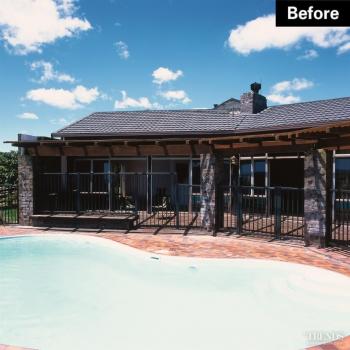 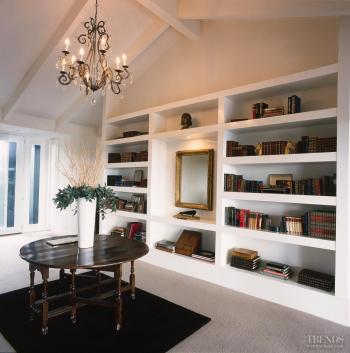 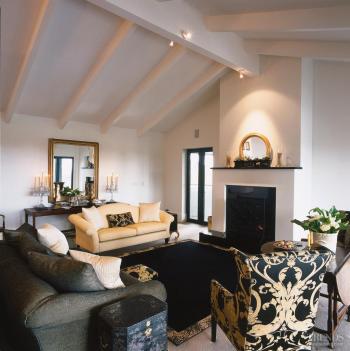 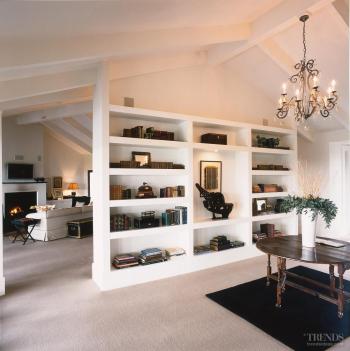 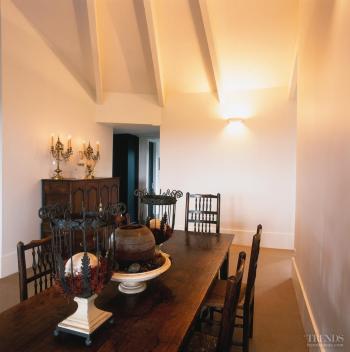 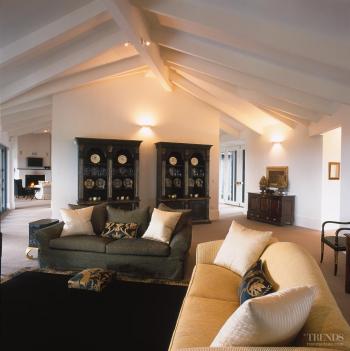 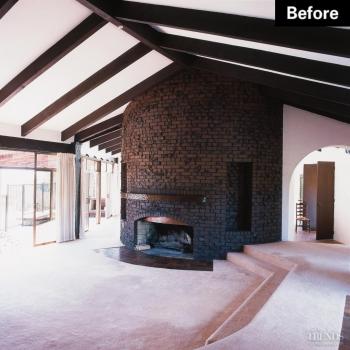 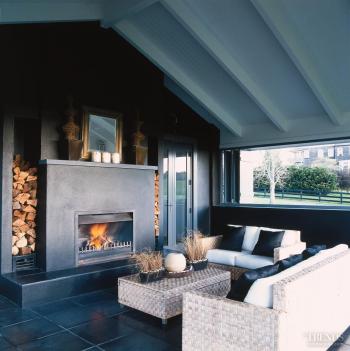 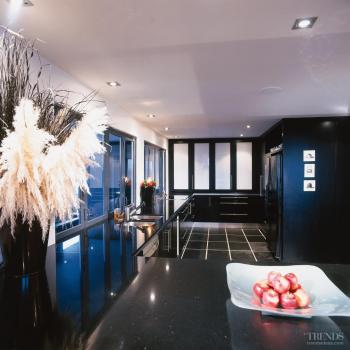 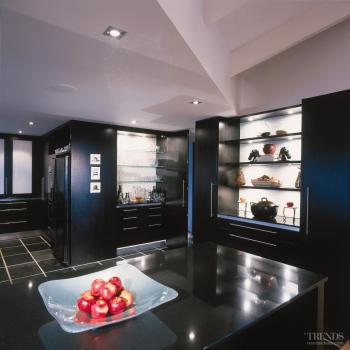 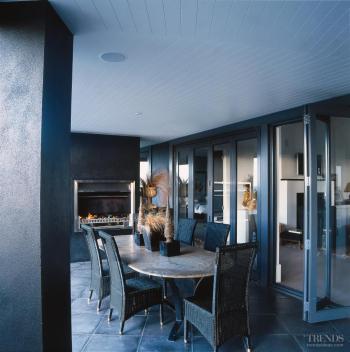 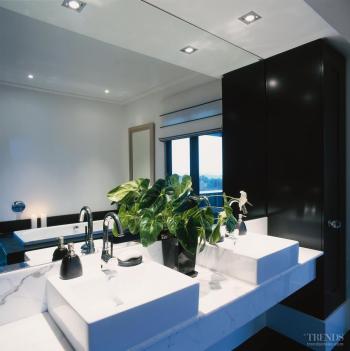 The extension at the south end became the new master suite, while the addition at the north created room for a loggia, complete with fireplace. A wrap-around terrace runs the length of the house, linking both these areas and providing access to a new lap pool.

"We opted for a very simple pool design, which would pick up the north-south axis," says Hulena. "Positioning the pool below the terrace also helps create a transition from the house down to the grass and paddocks.

"Looking back up at the house from below, the terrace acts as a podium. The pillars on this base are also a grounding element, helping to anchor the large expanse of roofing."

Hulena says the exterior of the house was kept deliberately simple, to enhance the long shape and the pitch of the roof.

"We chose to make it quite masculine and dramatic, hence the black plastered finish," he says. "But while it makes a strong statement, it is not too obtrusive."

Gen Hogg says the colour was also chosen to complement the white and grey tones of the neighbouring houses.

The front entrance of the house has a strong formality, enhanced by the symmetry of the formal landscaping with its box hedging, fountain and sculpture. A large portico also creates an arrival statement, says Hulena.

Mirrored black glass walls behind the sculptures and a similar freestanding wall opposite the portico reflect images back and forth across the courtyard, adding a further sense of drama to the entrance.

Inside, however, the formality gives way to more informal living spaces. Here, also, the original house is scarcely recognisable. Gone is the sunken lounge and shag-pile carpet, and also the circular clinker-brick wall that protruded into the formal living room.

"This circular wall was one of two in the house," says Hulena. "The other round wall was in the master bedroom, where the bathroom protruded into the available space."

While most of the house was gutted, the lofty ceilings and beams remain – although they are now painted white.

"The pitch of the roof was one of the few architectural features that we kept," says Hulena. "It creates rooms that are well proportioned – the large living areas are balanced by the height of the ceilings."

The family and formal living areas are on either side of the entrance hall, divided by open-ended walls.

"We wanted to keep an open flow to the living areas, but at the same time provide some containment for the rooms," says Hulena.

"The fireplaces are very big and very high. As the rooms are so large, there was a need to overscale some of the elements to create the right proportions," says Hulena.

All the living areas open to the new terrace and the extensive country and sea views.

Gen Hogg says white, black, grey and gold tones, and a touch of submarine blue, were specified for most of the furnishings.

"We wanted natural shades that wouldn't detract from the view," she says. "Using similar colours and a variety of textures throughout the house also helps to pull it all together visually."

A more dramatic look was specified for the kitchen, which features black oak cabinetry and a charcoal-grey slate tiled floor. To enliven the large space, white grouting was incorporated. A large bifold window opens to the stables area.

Hulena also designed a new guest wing, parallel to an existing two-storey bedroom and garage wing. This extension incorporates a study and helps to enclose the front courtyard.