Architects and designers don't often get the chance to transform a traditional brick row house built in the 19th century. Strict regulations govern what can and can't be done to preserve the character of such neighbourhoods.

Architect David Jameson says this project was something of an exception, due to the fact that the Washington, DC row house already had an existing solarium-style glazed addition.

"At some stage, previous owners had built on top of the brick carriage house adjoining the house," Jameson says. "We were able to get permission to repair and replace this part as long as we matched the amount of glass on the original building. Our design was conceived of a more Modernist, ideas-driven approach, because it became clear that the glass addition would need to be a freestanding structure. The engineering report stated that the old brick building was too brittle to support the horizontal loading of the addition, which is 13.7m high, 5.5m wide and 3.6m deep."

Jameson says the owners liked the original glass of the solarium and wished to retain the transparency for their new kitchen and salon-style living area.

"The walls of glazing needed to be braided together with the steel structure. We came up with the idea of adding steel bars of different sizes within the glass walls, to provide the required structural rigidity." 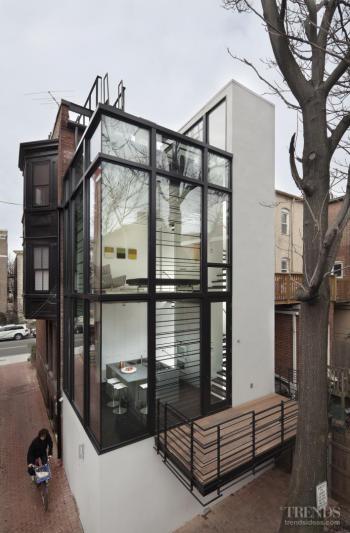 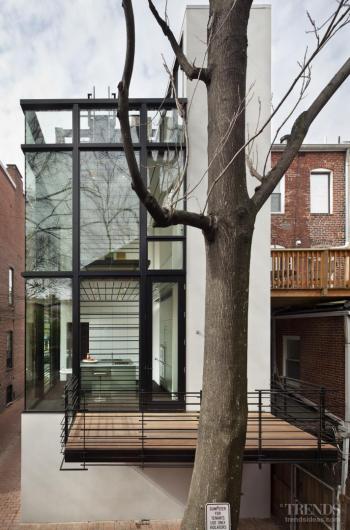 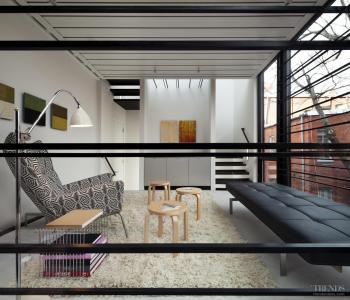 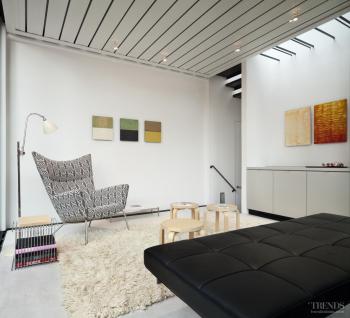 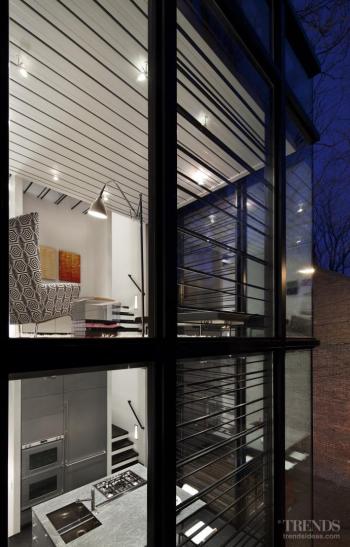 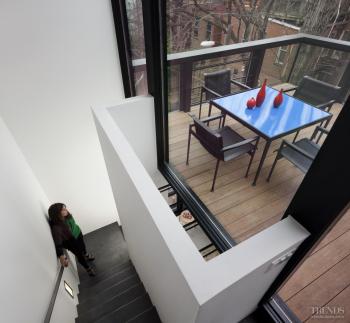 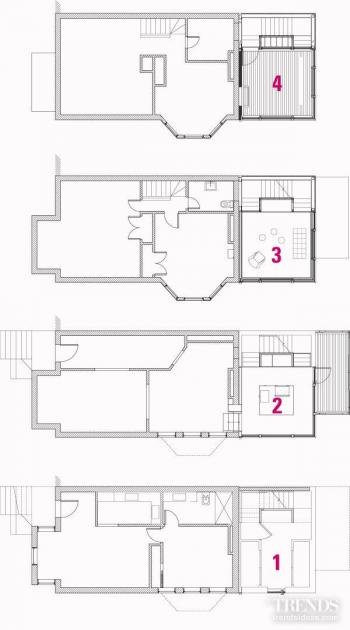 Because the design team still wanted to provide a visual link with the existing building, it was decided to align the steel bars to the datum lines of the row house.

"There are clear lines along the row house created by the architecture, such as the window sills and brick detailing," says Jameson. "Essentially, we created a hierarchy of the tectonic architecture – the more dominant lines became large bars and the thinner lines were translated into narrower bars. It is a juxtaposition of the historic fabric with the new, and the light with the heavy."

The team also worked with the existing brick base of the carriage house, covering this with a smooth stucco.

"We wrapped the stucco vertically up the building to create a sheath for the stair tower. This helps make the stairs a constrained space, yet there is still plenty of light entering the stairwell. There are gaps between the steel treads and a glazed clerestory that allows ephemeral light to filter down through all levels."

Although almost fully glazed, the kitchen has an elevated position that gives it a degree of privacy from the alley way that runs beside the row house.

"The owners understand that these rooms are exposed and that there is a sense of theatre about this part of the house," says the architect. "It is almost like a stage set, but that was also the case before the remodelling, so it is not something new they have to get used to."

The kitchen itself features a large square island of aluminium cabinetry, which Jameson describes as resembling a jewellery box, with little drawers pulling out in opposite directions. A bank of white lacquered cabinets along one wall provides ample additional storage. These cabinets are of different depths, depending on what was pre-existing on the wall behind. A former window niche, for example, creates an extra-deep cabinet for storing large items.

Metal acoustic ceilings in the kitchen and salon create thin floorplates that enhance the sense that the floors simply hover within the glass tower, much like a glass doll's house. One end of the ceiling in the salon extends up to a glass roof.

"No matter what the time of day, there is always somewhere that sunlight can enter," says Jameson. "The salon has the added advantage of the leafy outlook. The trees create an attractive dappled light."

The salon is simply furnished with designer pieces, including mid-century furniture that reinforces the Modernist look.

The upper level of the tower accommodates a roof terrace, which appears suspended in the tree canopy, much like an eyrie.