Although many people have a reasonable idea of the style of home they want from the outset, the final design is often influenced by its architectural surroundings. This is particularly true when a traditional home, with modern conveniences, is built in an historically sensitive area.

Architect Phillip Liederbach of Liederbach & Graham Architects, says although the owners of this home knew they wanted their house to complement the European influenced community where they lived, they had no commitment to any one particular style.

"The architecture of the surrounding district is predominantly Georgian, English Arts and Crafts, and French. The owners felt that an 18th century French Normandy theme was more representative of their lifestyle and would respect the historical influence of the region."

Prior to constructing this home, a 1940s ranch style home in poor repair stood on the four-acre site. Very little could be salvaged from the original home, besides very thick bluestone terrace pavers, which was recycled to tile the floor of the new screened-in porch. An old maple tree, formerly gracing the driveway, was also harvested for a tongue-and-groove floor.

"A lot of thought was given to the many functions of a home. I wanted to ensure rooms encouraged activity, yet I also wanted to provide private places," says Liederbach. "It is very much a family home, with an abundance of space being a primary request. 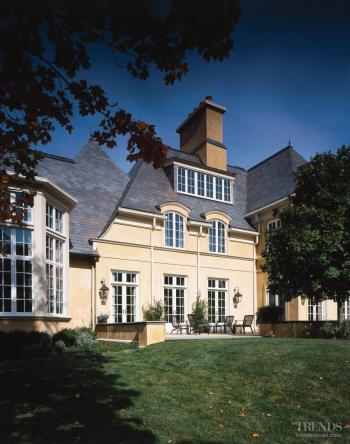 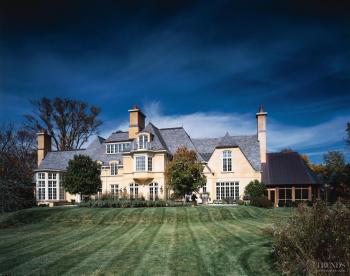 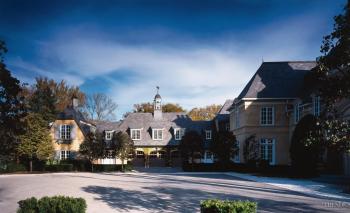 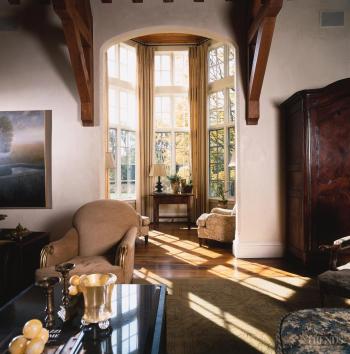 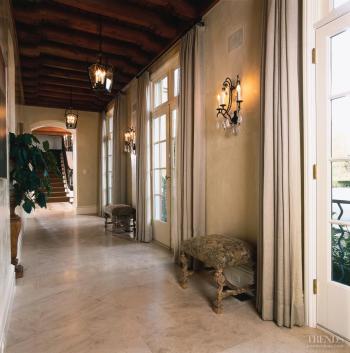 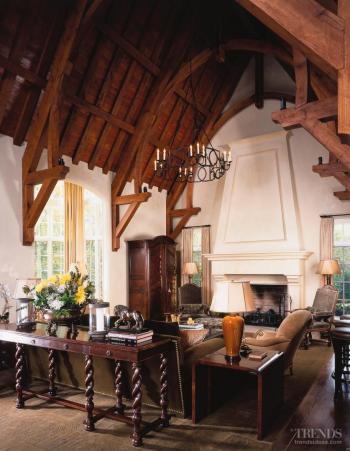 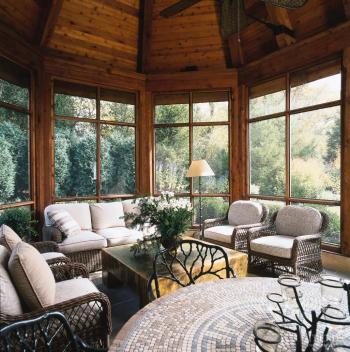 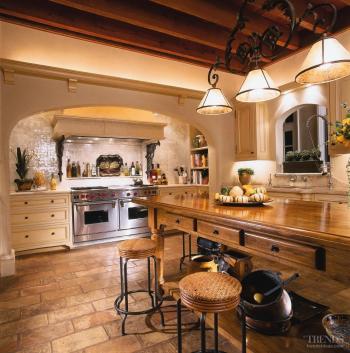 "It would have been very easy to build an imposing structure with an intimidating interior. This house is spacious, yet invites intimacy and interaction," says Liederbach.

Erica Weeder, the project architect, describes the home as having strong axial connections.

"From the front door you can see through to the rear of the home," she says. "The garden elevation faces the sun, and 12-ft high rear windows provide multiple sources of light, which penetrate far into the home.

Private spaces, such as bedrooms face the southern side of the house. Active areas, like the library, office and kitchen, overlook the home's approach, allowing the owners to survey the entrance as they work.

"It is the first residence we've owned where we enjoy using every room of the house on a daily basis," says the owner.

"Many guests are surprised to discover the home is new. They initially think it is much older, due to the authentic finish," the owner continues. A testament to the architects attention to detail.

The exterior has been coated in a color impregnated stucco that replicates materials used during the early 20th century. The stucco fades irregularly and gives the home an authentic character.

The interior, although remaining true to the period, makes use of space in a more functional manner than traditionally built homes of the genre. A combination of casual and formal areas flow from one room to the next.

"Each room has a distinct character, while borrowing elements from connecting rooms," says Liederbach.

An arch links the formal living area with the dining room, and a mezzanine floor, connected to the master bedroom suite, overlooks the main living room directly adjacent to an informal family room.

"There is an interesting contrast between large spaces and small spaces. This gives an expansive home a feeling of intimacy, and comfort," says Liederbach.

"The owners are avid readers. A bay window off the family room provides a place to indulge. I wanted to include a space that just two people could enjoy," says Liederbach.

A glazed sitting room connects to the main living room through a seven-foot high arch, and enjoys views of the southern garden.

The porch derives character from the reclaimed bluestone slate floor and a high ceiling. Radiant floor heating and a fireplace extend the use of this space well into the spring and fall.

All ground floor rooms have exposed oak beams. Wood framing is rare in this area, giving this home a significant point of difference and an air of old world charm. The wood was hand selected from a private oak stand in Wisconsin, then independently milled.

"I took the owner to an oak wood where we chose trees with interesting twists and knots. The milled trees translated into attractive grains, and gives the cathedral ceiling, in particular, a rich tapestry of texture," says Liederbach.

The height of the cathedral ceiling in the formal living room is accentuated by lights concealed in the wood work.

Liederbach believes that lighting should be either a feature or invisible, and has incorporated a complex system that allows scripted lighting to be set for every room of the house.

The use of wrought iron, including a custom-made chandelier suspended from the cathedral ceiling, contribute to the transparent nature of the house.