Designing a new home along the lines of a past architectural style requires a delicate touch. The new residence has to look its historical part in terms of detailing and scale, but at the same time integrating practical, modern advantages.

Situated in a well-established area, the large family home showcased on these pages combines American Georgian architecture with a contemporary penchant for indoor-outdoor flow.

The brief for the project was to create a comfortable family home in keeping with its immediate surroundings, says principal architect Michael Munckton of architects Rosenthal, Munckton and Shields.

"An American Georgian-style home was appropriate to the area, and offered the air of permanence and retreat the owners required," says Munckton. "These large, comfortable homes were popular during the 1700s, and echoed the even larger, more elaborate Georgian homes being built at the same time in England."

The home's face brickwork, medium pitched roof, flattened columns and symmetrical shape all contribute to the authenticity of the design. 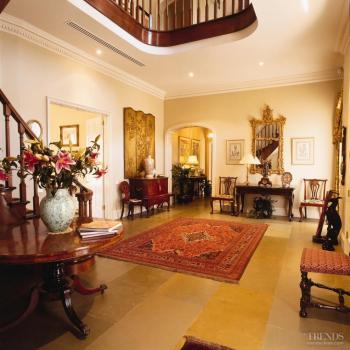 "The face brickwork was an important aspect of this project," says Munckton. "The bricks were made specifically for the home and feature a shorter profile than that of standard modern bricks."

This means a third more bricks were used to cover a given area. As a result, the surrounding mortar has become an important part of the overall effect.

The bricks were fired in an original brick kiln and individually chosen from various parts of the batch to create an authentic variety of color.

While the style of the home is faithful to the past, it does have some modern day advantages, introduced subtly.

"Principally, this home offers the modern concept of natural light flooding through its interiors combined with another of today's must-haves – indoor-outdoor flow," says Munckton. "While the door and window profiles are true to the flavor of an American Georgian home, this house offers a much greater number of French doors leading out to the garden."

Introducing additional French doorways into the traditional facade meant Munckton had to work carefully to achieve a visually balanced exterior.

"We chose bifold shutters for the exterior because only half the slatwork is on display when the shutters are open. The result is a more vertical emphasis," says Munckton. "From the multi-hued brickwork to the home's vertical lines, everything was carefully proportioned."

The mellow tones of the recycled slate roof also contribute to the home's charm.

"We chose a recycled roof because a new slate alternative would have looked out of keeping with the facade," says the architect. "As with the windows and doors, the prominent chimneys were kept to an accurate scale."

The interior is every bit as American Georgian in flavor as the exterior. A grand hallway leads off to the living room, dining room and study.

Built from solid Brazilian mahogany, the room's millwork, such as the staircase and handrail, has a furniture look. Other traditional elements include flat arches, wallpaper, subdued paint tones, and polished stonework.

"A large casual dining area and family kitchen provides the focus of the house," says Munckton. "The scale is impressive but not daunting, and the flavor of design found in this room runs throughout the interior."

These large family rooms get more light than similar homes built in the 1700s. However, while the windows are larger than those in original American Georgian homes, the traditional glazing bars, as with much of the home's detailing, were custom-built to remain true to the past.

The kitchen's traditional muddied palette, furniture-like pillars, and cabinetry panelling belie its contemporary function. The space is fitted out to allow two or more cooks to work at the same time. There are two ovens, three sinks, and a generous walk-in pantry.

The interior layout includes a study and eight generous bedrooms. Fittings and window treatments were all chosen for their reference to the period architecture. As with the kitchen area, the bathrooms combine practical features with a look of the past.

"The home's faithful architecture, authentic brickwork facade, and custom detailing all contribute to its dramatic presence," says the architect. "But, as with all the homes we build, it was important to us to create an environment that provided a backdrop for the owner's lifestyle and possessions."