Gold accents, mirror-front drawers, and stone floors contribute to a high-end ambience in this ensuite

Gold accents, mirror-front drawers, and stone floors contribute to a high-end ambience in this ensuite Discover this article's resources 0

Even in the most high-spec bathrooms it's the unseen work that often has the greatest impact. The time and effort poured into creating the perfect backdrop in terms of light, and user-friendly layout will benefit the final design later.

Before this makeover by Jason Bonham of Bonham Interiors, the old bathroom had dark, oppressive tilework and was robbed of natural light by a poorly situated opaque shower stall.

To optimise sunlight in the master ensuite, the designer reoriented the room – taking out half walls and moving others to simply let more light in. However, build limitations meant the plumbing had to remain where it was, making it a highly involved task to relocate the facilities.

"Designed for the lady of the home, the brief was simply for the space to shine like a diamond. We took several approaches to this," says Bonham.

The walls, including the shower stall's internal walls and ceiling, are finished in a mosaic white gold tile, while the fixtures and fittings throughout are also surfaced in gold. The tiny mosaics bounce light through the space, making the most of the room's limited natural lighting. 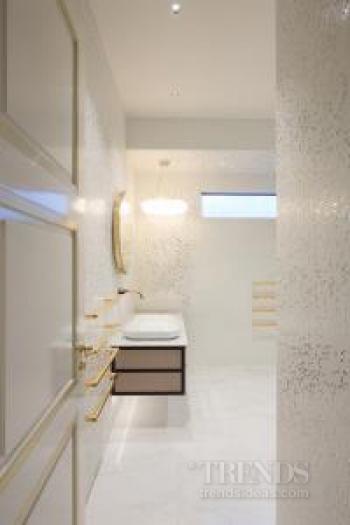 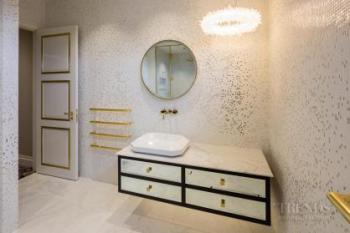 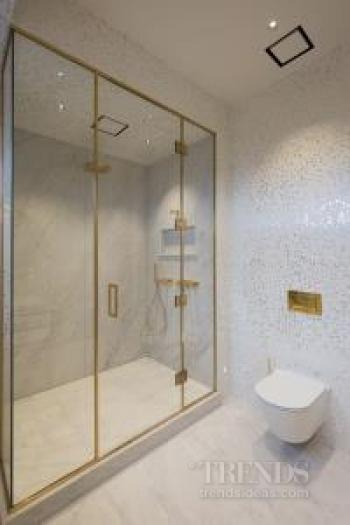 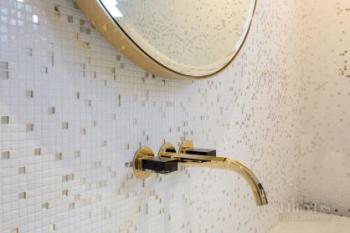 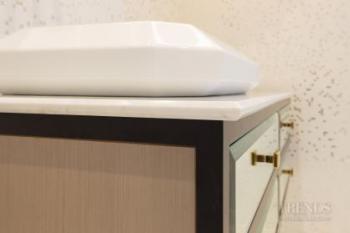 However, the bling effect doesn't stop there – several features add to the room's sparkle.

Many of the bathroom's stand-out elements were custom designed by Bonham Interiors.

"We created the cabinets in two types of veneer and used mirror-fronted drawers to further optimise light play. The custom handles are gold, too, as are most fixtures in the room.

"Together with a crisp, sparkling appeal, the owners wanted touches of wood in the design," says Bonham. "To this end, I designed the vanity with an external frame in ebony – this together with a charcoal strip around the narrow window are the only dark tones in the room."

The Bisazza sink was imported especially for the project and this has faceted edges – a look carried through by Bonham on the marble countertop and even the mirrored drawer fronts. The vanity, together with a tall cabinet in the same finishes by the shower, provides ample storage.

LED downlights were chosen for their accurate colour rendering, thus increasing the visible detail of the veining in the marble floors. The Diamond Ring chandelier, another spark-ling feature, is made from hand-cut rock crystal.

"The project is rich in detail. For example, all lines agree perfectly in the shower, and the mosaic tile runs right into the window niche."