The extensive glazed facade of this coastal home, with its panoramic sea views, serves as a windbreak protecting a serene rear living area

Think of coastal living and images of ocean views and sunny days on the beach probably spring to mind. However, protection from fierce winds, tempestuous weather and violent storms is also a consideration for those who reside by the sea.

Architect Robert Andary says he maximised this home's connection to the coast by taking advantage of the site's topography. Working with the terrain, his design offers both superlative sea vistas and protection from the elements.

Andary says the owner, Melbourne property developer Brian Amatruda, was clear about the type of house he wanted, but left it up to the architect to create a design to complement the exposed site.

"We wanted to achieve as much elevation as possible, without exceeding the 8m height limitation. We chose a position between two nodes on the ocean side of the site, so the lower level of the house is literally nestled in among the dunes," he says.

Linear and uncluttered, the home features two distinct overlapping building forms laid perpendicular to each other. 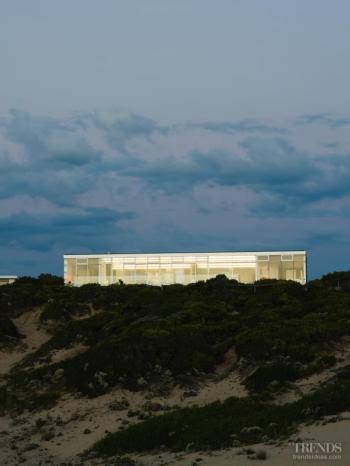 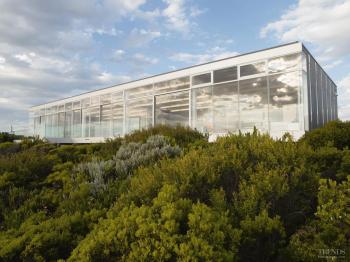 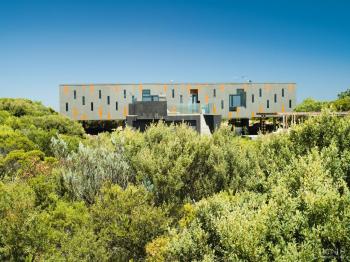 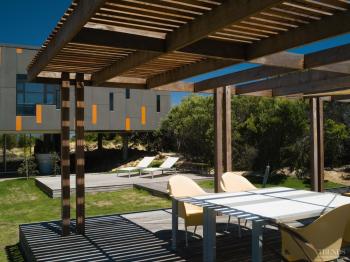 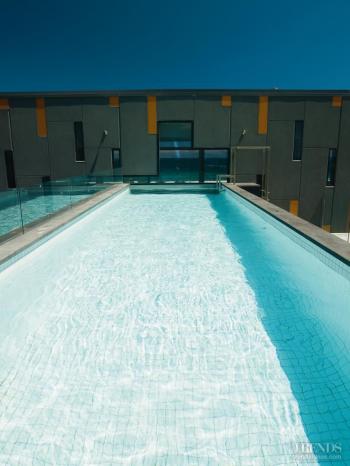 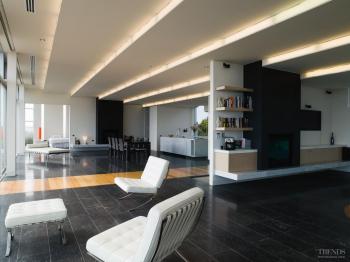 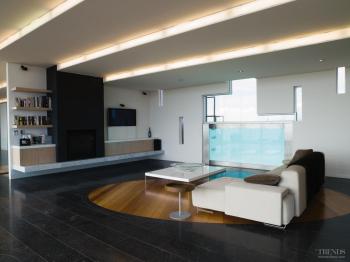 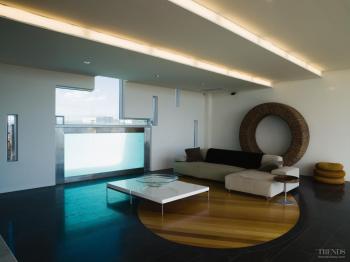 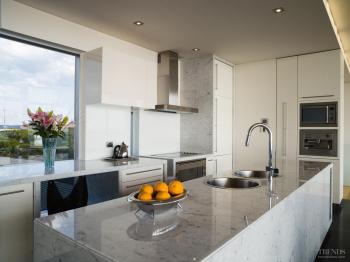 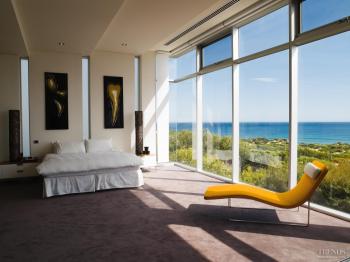 "The lower form acts as a plinth, and is excavated one metre into the dunes. Precast concrete walls define the base, either with a corrugated profile, or rendered in a deep grey, so as to sit subtly amongst the vegetation.

"The upper form is predominantly concrete at the rear and glass at the front. The vast expanse of glass takes advantage of the views and creates an impression of transparency," says Andary.

A benefit of the design is that the upper level, which seems to delicately perch atop the native ti-tree, provides a windbreak for the extensive outdoor living areas and swimming pool on the opposite side.

This, the protected side, is constructed from concrete panels decoratively arranged in a repetitive pattern, broken up with alternating areas of clear and orange painted glass.

"The fractured pattern of the back offers distinct and unexpected views, and provides privacy from neighbouring homes. The front is basically a 30m wide glass viewing panel that can be completely opened up," says Andary.

Sitting over the garage on the upper floor is a linear pool that provides a link between both the upper and lower blocks, and the internal and external spaces.

"The pool is accessed from the adjacent deck, and bears a direct relationship with the living space through a window that literally separates the living area from the water."

Entry to the house is also from the rear, via stairs and a timber walkway that continues through the home's interior to a protruding balcony on the oceanside deck.

The living area and two main bedrooms are located on the upper floor, while the lower level features two more bedrooms, the laundry, garage and a games room that opens up onto its own deck.

"Relationships between the internal spaces and the surrounds were a design focus. The living and sleeping spaces are dominated by the view, while service areas, such as the kitchen, are concentrated at the rear to diminish any intrusion into the living area. The terraced ceiling also gradually increases the volume of space as you move towards the views," says the architect.

An elliptical glass insert in the living room floor is another connection, allowing views to the dune below. Another elliptical-shaped insert, this time made of timber, contrasts with the elongated bluestone tiles on the floor.

"The materials chosen for the kitchen – Carrara marble countertops and white two-pac finished cabinetry – also contrast with the bluestone floors. They allow the kitchen to dissolve into the living area's neutral-coloured background. The kitchen was also specifically designed to wrap around the windows."