The spacious interior of a New York loft is the perfect backdrop for a serious art collection, but as this project shows, even fixtures and fittings can become sculptural artworks in themselves.

Architecture in Formation architect Matthew Bremer says the new owner of the apartment fell in love with the former warehouse building. He was less enamored of the kitchen, however, which was high end, but conventional.

"The owner wanted a kitchen that would make a bold design statement," says Bremer. "He wanted to push the boundaries with an interior that would be a real conversation piece. We could see there was potential to play up some of the key features of the space, including a series of giant columns with simple faceted capitals, which became the genesis for the entire design. We removed walls so all the columns can be seen marching in formation down the room."

The architect says the columns inspired a similarly sculptural architectural response for the kitchen.

"The kitchen is essentially an insertion within the loft. With its tapered planes and sleek lines, it is almost like a luxury yacht docked in the middle of the space." 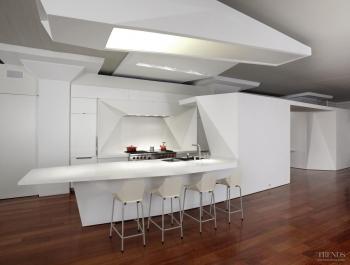 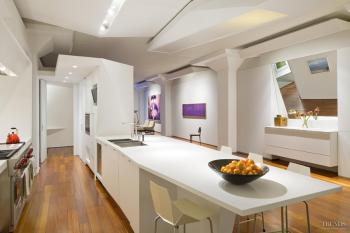 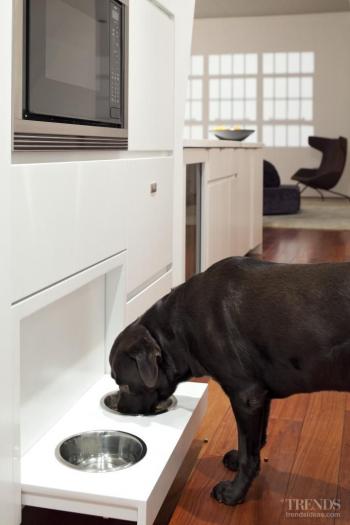 With all the apartment walls painted white, the same color was chosen for the kitchen walls, cabinets and countertops.

"The interior architecture can be seen as a very pure geometric study," says the architect. "That sculptural sense continues with the kitchen, but the individual elements also have a more pragmatic function. For example, the overhead light box accommodates a projector. Stretched, translucent PVC on the underside of the box provides a soft light. And the faceted, slightly pyramidal form of the backsplash serves to disguise the ventilation unit."

A custom 18ft Corian countertop in Glacier White, sourced through Roberta Kravette of Nieuw Amsterdam Kitchens, provides a work surface and a table top. The Corian has a seamless appearance and a tapered form – at the base it is 4in thick, but just 1in at the cantilevered end.

Corian also features on the sides and top of the faceted backsplash. Other key elements include integrated appliances where possible, a canopy overhang that encloses vertical cabinets and a television, and a separate cantilevered bar positioned opposite the kitchen.