Combining up-to-date technologies and design is a huge attraction. But with new audiovisual and home automation technologies being introduced at an ever-increasing rate, the question is, will the design of the home soon seem out of date?

Such was the dilemma for the owners of this home, perched on the edge of a golf course. With a desire tocontinually explore new technologies as and when they are introduced, the owners approached Steve Tyro, director of Tyro Audio Visual Design and Integration, to future-proof their home for the latest in AV design.

"The owners wanted flexibility in design to create space for new technologies. So while we did not compromise on their current entertainment systems, we were sure to leave room for when technology catches up," he says.

Tyro's input into the project was substantial, creating a network of facilities to enhance the owners' lifestyle – now, as well as in the future – without encroaching on the home's contemporary aesthetic.

"When I first consult a residential client, a major consideration is how I believe they are going to use their home, as well as how they think they will use their house. Somewhere in between lies the reality – how they actually live their lives once they've moved in." 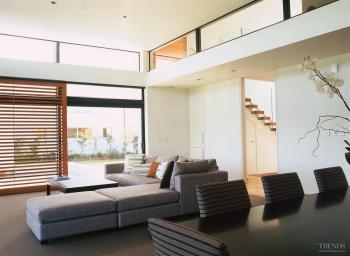 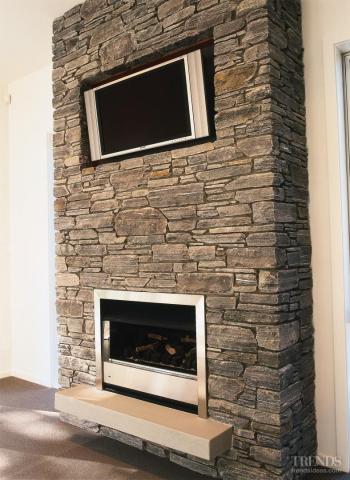 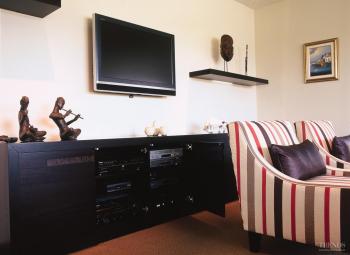 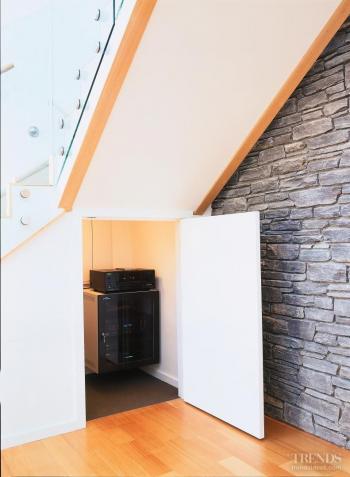 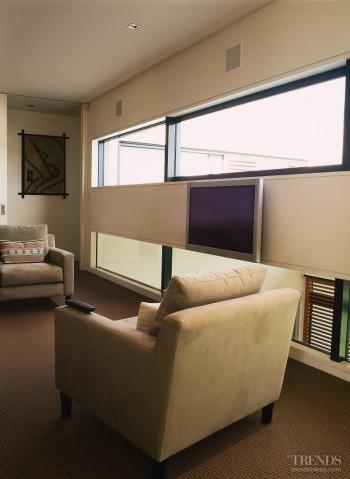 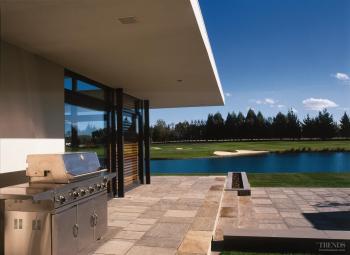 To respond to their initial needs at the time of consultation, as well as accommodate the realities of living in the home, Tyro's solution was to go wireless – allowing for both changes to the owners' lifestyle and the introduction of new technologies.

"The Control 4 remote works on radio frequency rather than infrared frequency. The home's orientation and vast windows allow a great deal of light into the home, which could be problematic with infrared remotes. Radio frequency is not affected by sunlight, and can also operate componentry concealed within cabinetry without the need to direct the remote toward it."

A Control 4 hard disc manages the entire multi-room audio system, and uses a Yamaha amplifier to output sound to four rooms with discreet on/off codes. Music settings are controlled by in-wall touchscreens in the living area and outdoor patio.

"When the owners desire an updated audio system, being wireless means change is as simple as installing a new audio control switch."

Tyro's choice of speakers further highlight his attention to detail.

"The owners chose square light fittings, which are recessed into the ceiling. As the speakers are also in-ceiling, it was important that they match the lighting. Most speakers have either a round or rectangular shape, however, PSB speakers from Canada had the desired square shape, as well as producing phenomenal sound."

LCD televisions from Sony's Bravia range were specified for their ability to maintain clarity in the home's highly illuminated rooms, where the potential for reflection is high. There are five LCDs throughout, all with HDMI input – the Sony DVD and surround- sound receivers having HDMI output – together bringing the cinematic experience to life.

As the next-step DVD is being developed and HDTV is in the process of being introduced, Tyro says this home is wired for the future.