Instead of opting for a typical terrace house conversion, the designer of this home took his cue from the original interior layout

Front to back Discover this article's resources 0

People are often drawn to a home for its character, rather than more practical reasons, such as room size and layout. Dealing with small or awkwardly shaped rooms makes interior design a challenge, but with the right approach, even the most compact home can be transformed into one that feels open and spacious.

This is often the case with traditional terrace houses – they have plenty of character, but they can be difficult do-ups. Their narrow shape, solid walls and lack of light require an innovative design approach. For many architects and designers, the solution has been to gut the interior to create open-plan spaces with a family living area opening out to the rear. But that wasn't a plan that would work for this house, says designer Greg Natale.

"The owners liked the idea of separate spaces, but to provide a living area at the rear would have alienated the front rooms," he says. "It was important to link the entire house, from front to back, which is why there is a direct line of sight from the front door through to the rear."

For this reason, also, Natale says he chose to retain the original layout, keeping the living room at the front of the house, and positioning the kitchen in the middle.

"The kitchen became the hub of the house, having a strong connection to the living area at the front, as well as the courtyard at the rear." 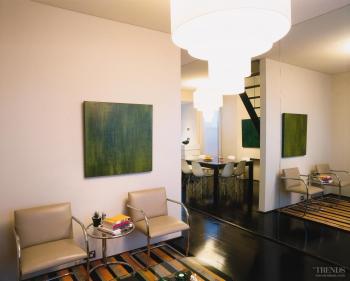 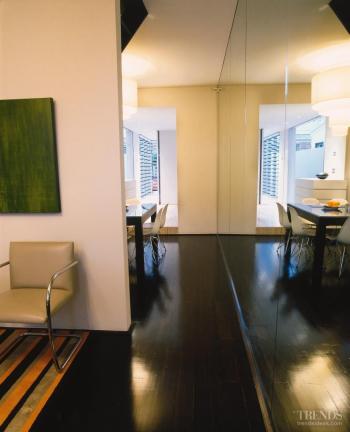 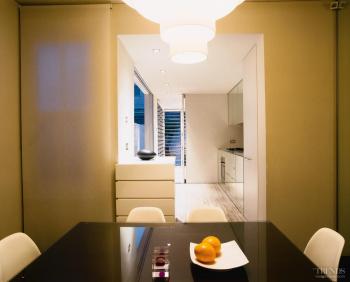 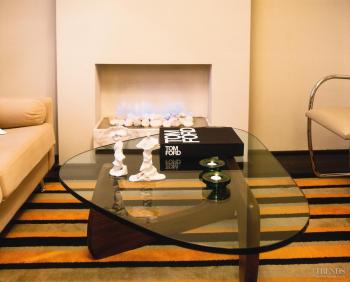 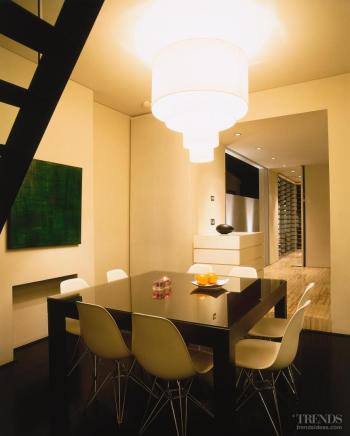 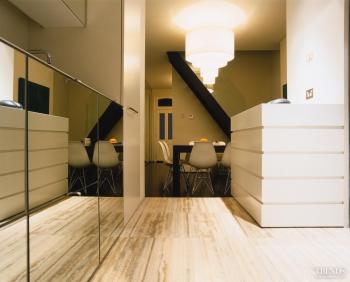 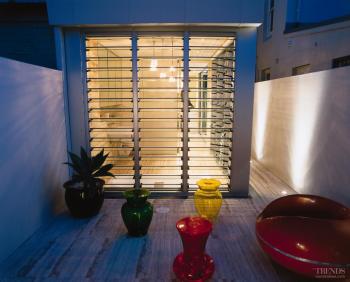 Natale says the original house, which was built in the 1880s, was not only narrow, but also very dark.

"The owners wanted a sleek, minimalist interior with a lot of glass and mirrors, which was an ideal way to create a light, spacious look."

To this end, the right-hand wall of the living area features floor-to-ceiling mirror panelling. This extends from the front door through to the kitchen.

As well as doubling the apparent size of the house, the mirrored wall also reflects light, making the interior bright and airy. White walls further enhance this effect. The floors, however, feature a dark-stained wood, which provides a strong contrast and helps to visually ground the space.

The kitchen is raised a step up from the front rooms, as it was in the original layout. Natale says it was easier to retain this change of level, which also helps to create a sense of separation.

Like the rest of the house, the kitchen reflects the uncluttered, minimalist theme. The cabinetry features flush, mirrored doors, and where possible, appliances are integrated. A solid, square-shaped island with negative detailing provides an additional work top and storage.

"Minimalism is all about detailing," says Natale. "Every item needs to be carefully considered as it plays such an important role in achieving the overall look. This includes ensuring lines are perfectly straight, which can be difficult in an old home."

"Using very dramatic, over-scaled pendants was a way to play up the space. There is a very fine line between creating a minimalist interior and a room that is simply boring. Introducing textured elements is another way to achieve the right balance in a minimalist interior."

This was also a reason for the choice of striated travertine for the bathroom floors and walls, he says.

"The bathroom plays a significant role in this house. As it is the last room leading through to the courtyard, it needed to be transparent to retain that line of sight from the front door. For this reason, it is effectively a glass box with louvred walls and everything sunken out of sight – the tub is set into the floor, and the basin cantilevered so the view is not restricted. Using the patterned travertine ensures it is also a visually interesting space."

Access to the courtyard is through large bifolding doors at the side of the kitchen. Philippe Starck stools and a curved, vintage, retro-styled seat add a touch of whimsy to this outdoor entertaining area. Similar travertine tiling links the courtyard with the house, enhancing the sense of a single, large space.