Future proofing is a feature of all these projects, which reflect a demand for ultra-high efficiency

If there was ever any doubt that commercial tenants would be prepared to pay extra for a highly efficient, well-designed workplace, then this project puts the idea to rest. Tenants signing on early for space in the new ANZ Tauranga building raised the bar themselves, demanding even more services and efficiencies. This in turn led to a much larger, more sustainable building with improved facilities.

Architect David Wingate of Wingate + Farquhar says that right from the start, the team looked for the most efficient floorplate possible.

"Because this was to be a very large building, it made sense to put the core in the middle where services could be shared by up to six tenants," Wingate says. "We were able to align the front and rear entries, maximising the lobby space and amenities.

"Visually, the recessed front entry helps to break up the mass of the building. The main canopy not only divides this long elevation, but also heightens the sense of arrival and connects visitors more directly with the vertical circulation within."

Wingate says the design also responds to the significance of the site, on a prominent corner. 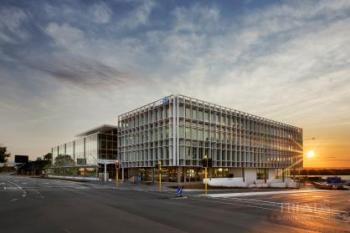 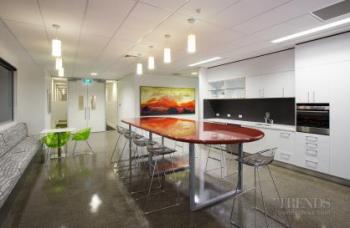 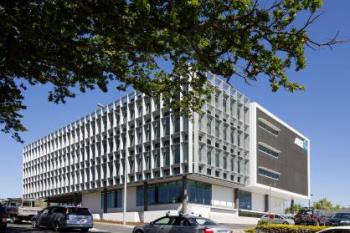 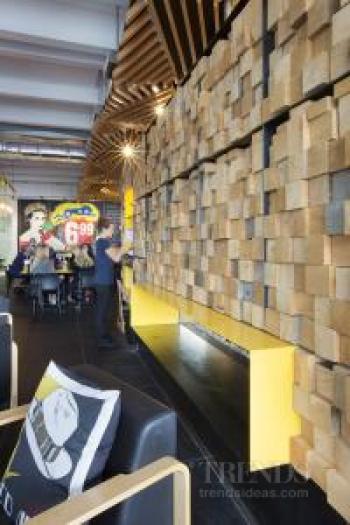 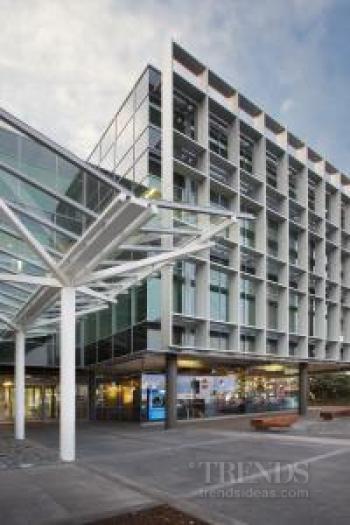 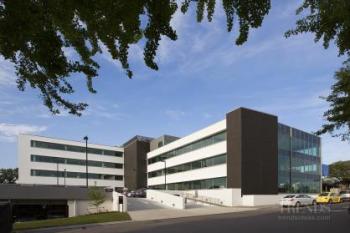 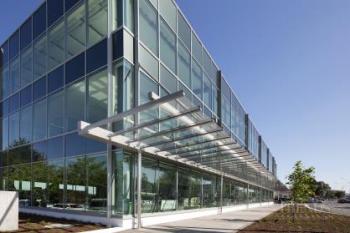 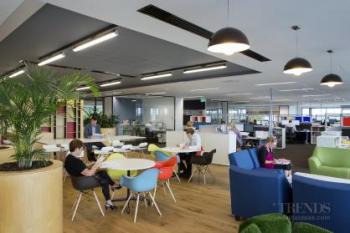 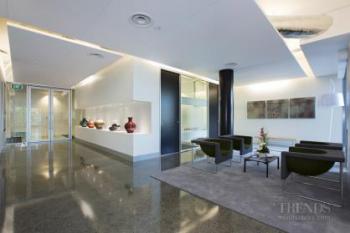 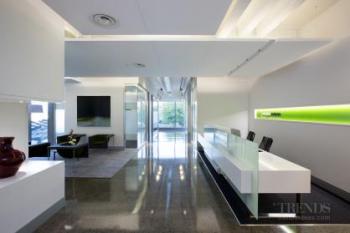 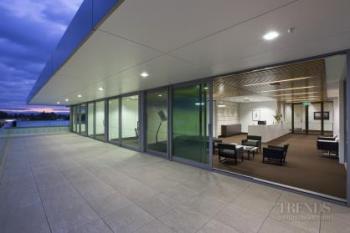 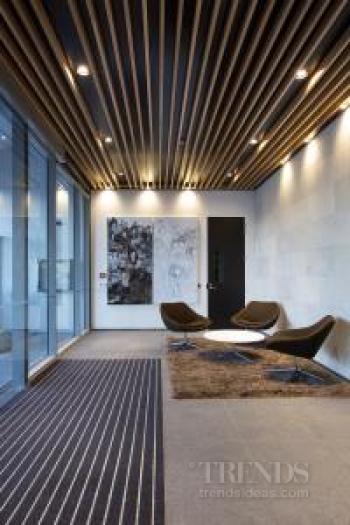 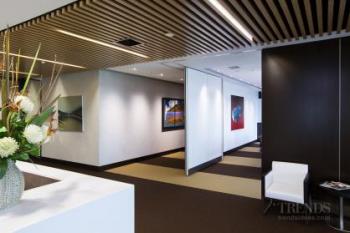 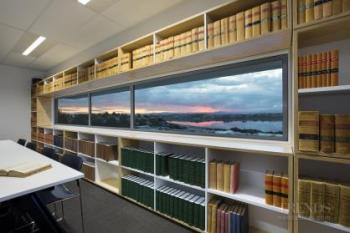 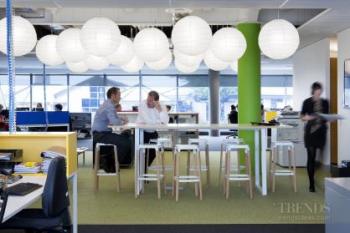 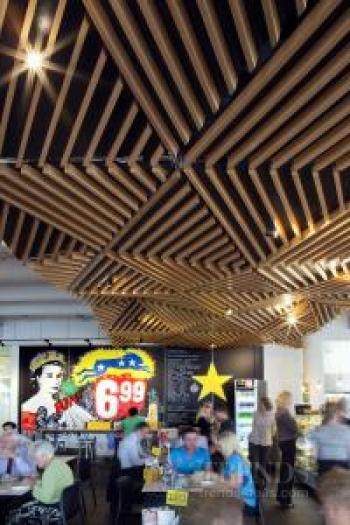 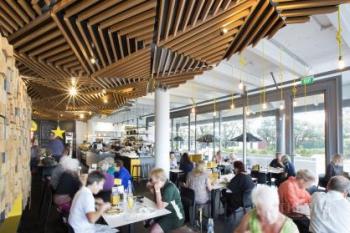 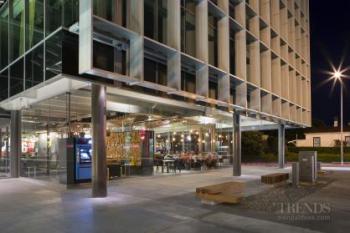 "This needed to be a gateway building – its scale acknowledges the junction between Cameron Road and Elizabeth Street, which is a major urban intersection. This is also why we provided a setback – to create a new public space for the city."

Different facade treatments on each elevation help to minimise the bulk of the 8000m2 office.

"We wanted to break down the parts so it would look like two buildings coming together in the middle," says the architect. "Deep louvres provide sun control on the north side, while the east and south facades are glazed. The west facade, attracting the greatest heat from the sun, features a large, precast concrete wall with smaller areas of glazing. These are punctuated at the ends with panels of exposed aggregate. On one side there are long slot windows in the aggregate."

The team specified a 1500mm-grid building, which provides efficiencies in terms of a seamless fit-out. The ceiling tiles are 1500mm x 500mm, as compared to the traditional 1200 x 600mm. Wingate says the 1500mm system has become more common in Europe and Australia, but this building is believed to be the first installation for Tauranga.

"We spent a lot of time talking to potential tenants and designed the building around their needs," says the architect. "The design matured as we progressed, and tenants actually demanded facilities that have made it a much better building. Working with the construction team from Day One also meant we could control budgets and construction methodology to provide savings."

Wingate says the biggest challenge for the team and developer was in getting firms to move from very large premises to offices with a small footprint, albeit a more efficient workplace.

"The rentals in the new building are a little higher than the rather low average in Tauranga, but because space in the new building is used so efficiently, the value is obvious. Staples Rodway, for example, had 1600m2 in its former premises; now it is down to 920m2, but the firm has more space than it can use, so there is plenty of room to grow."

Wingate + Farquhar also designed the interior for many of the tenants, including Staples Rodway.

"It was a win-win situation for the tenants," says Wingate. "They could be involved right from the beginning and could make changes early on if these were required."

The interiors all reflect the move towards a more open, transparent workplace that offers flexibility along with space saving. As well as workstations, there are plenty of breakout areas, small tables for informal meetings and shared spaces.

"We introduced the concept of the third office to the Cooney Lees Morgan fit-out, which is like a marketplace, or a piazza, popped into the middle of the office," says Wingate. "This breaks up the monotony of the open-plan workstations with their rows of desks. It's a non-hierarchical gathering place. And with modern communications technology, workers are more mobile – they can work anywhere. At times, when work schedules are different, they can even share desks."

A café was added to the ground floor. Originally just one large open space, the interior is now divided by a timber block wall with a fireplace that helps to keep the café intimate and welcoming. With its full-height glazing, the café has a strong connection to the street, bringing a vibrancy to the corner, and a new destination for local residents.

The architect says that while the developer did not seek a rating from the NZ Green Building Council, the building has been designed to meet Green Star criteria.