Although symmetry and order play a part in this terraced pool area, the design brings coherence to the large space through its simplicity

Formality aside Discover this article's resources 0

Plenty of space is something most people look for in a home, but having ample room doesn't necessarily mean that you'll be able to enjoy what you have. To make the most of space, design may need to play a part and assert some control over the natural environment.

In the case of the well located but tightly configured site featured on these pages, architect Andrew Grant had to combat a continually declining narrow section to provide the strong indoor-outdoor connection and generously sized swimming pool the owners wanted. At the same time, the design brief also asked that he maximise the home's view of the park and harbour at the rear of the site. The answer was to create three terraced levels running from the house to an enclosed area of lawn at the bottom of the property with interesting connections between them, says Grant.

"The design draws on the park for the view and a sense of openness while using the symmetry of the house and containment of the terraces for privacy," he says.

"During the design process, there was a gradual evolution to higher quality materials and a more contemporary approach. The resulting features are aimed at creating a relaxed formal setting and allow for the integration of large simple elements. The aim throughout was to use a restricted palette of materials, forms and plant types to create a relaxed environment."

From the top terrace, steps between two large planted pergola structures lead down to the pool. The pergolas serve to screen and define the terraces and frame the views of the park. At the pool level paths leave the central axis of the home and move around the pool along narrow paving bordered with strips of planting. 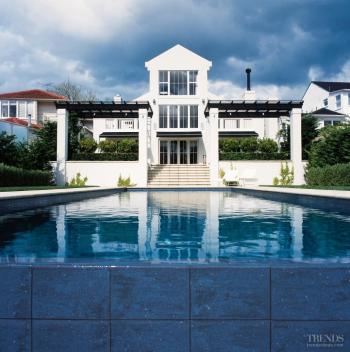 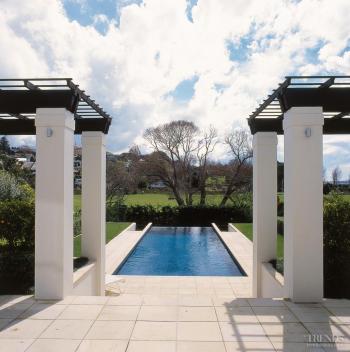 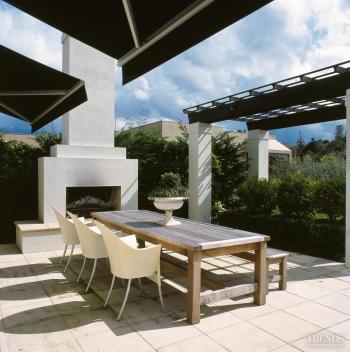 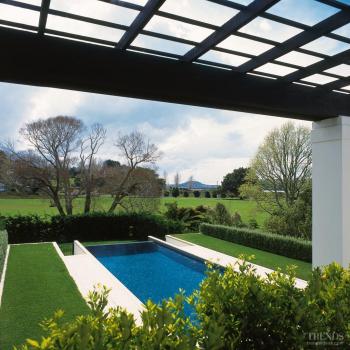 "The design's elongated proportions connect with the bigger landscape of the park and beyond, and act as a counter point to the more enclosed levels at the top and bottom," says Grant.

The paths lead to a pair of steps on either side of the pool and on down to the third level. There a grass courtyard makes a feature of a weir and waterfall from the swimming pool.