A formal leading cabinetry element in a rural home might seem at odds with the environment, but there are ways to achieve a sense of balance.

For this kitchen in a new extension, the clients wanted something special for both the kitchen and the surrounding living areas, says designer Rachele Simmons-Taling of Berloni New Zealand.

"They're a fairly casual family, living on a beautiful lifestyle block, but both clients had a love for the formal traditional kitchen and hearth," says the designer. "In response, we chose the Berloni GranGala cabinet door style, but the rest of the kitchen had to be carefully designed to tone it down and ‘deformalise' it, to match the rustic, relaxed setting.

"We approached this in a few ways. One was the choice of the French country lattice work on the front of the island and upper cabinetry. And we introduced a square edge on the marble countertops to add a subtle contemporary accent to the classic door.

"In addition, bronze tapware was chosen rather than the stainless more often teemed with the GranGala. The bronze is less pronounced." 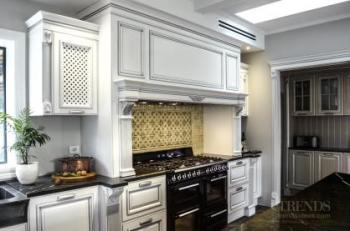 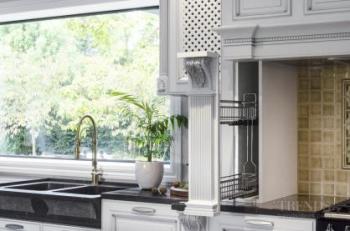 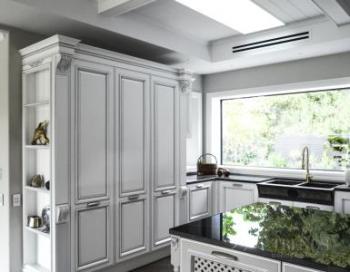 The tile splashback is another stand-out kitchen feature introduced by Simmons-Taling.

"I contacted Pratt & Larson, a bespoke tile company in Oregon, USA, to fabricate the tiles for the splashback. These are hand-crafted, watercolour tiles with a colour scheme purposefully chosen not to match the cabinetry, but rather to complement it and bring the earthy tones of the outdoors into the interior space."

The wider room adds to the country flavour. Rustic barnwood flooring was selected to complement the ceiling design by Simmons-Taling.

"The ceiling's tongue & groove panelling, beamwork and X beams bring a very American family look to the space as well," she says.