Every home needs a conversation piece. The house featured on these pages has several – starting with the architecture and extending to the owners' extensive and dramatic art collection.

Designer Dane Richardson of Dane Design Australia says an old holiday shack was removed from the site to make way for the house. But while the owners wanted a much larger, modern home, they didn't want it to dominate the landscape.

"We chose to push the building down into the site, rather than raise it up," says Richardson. "The site has a very wide verge and we were able to set the house well back from the road. And we used the gradient to position the garage lower than the main floor, so the house doesn't look imposing from the front."

The design team also minimised the profile of the roof, specifying a shallow pitch and a sharp knife edge.

"Essentially, we manipulated a more traditional hipped roof by turning it upside down and exposing the hips on the underside," says Richardson. "We also trimmed the pressed metal edge to a mere 4mm to exaggerate the overhang. Along with the Pacific teak lining, it helps make the roof a much more dramatic feature, both externally and internally." 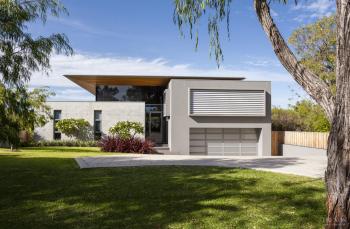 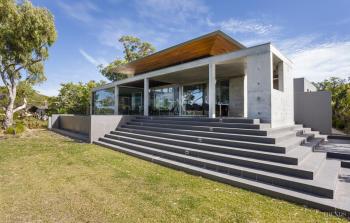 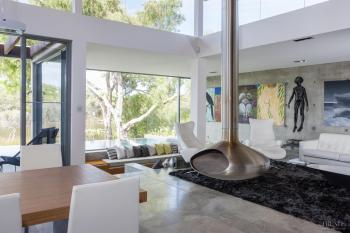 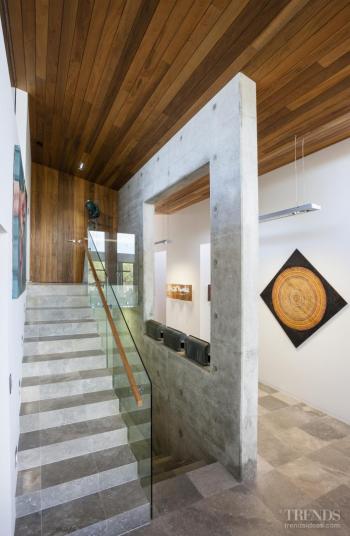 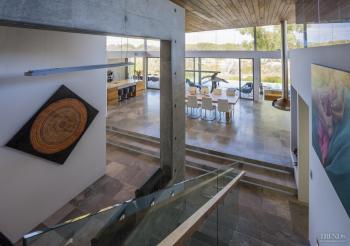 Black glass clerestory windows right around the house further enhance the sense of drama, making the roof appear to be suspended. Richardson says the design plays with the notion of light versus heavy. Visually and literally, the roof is a massive element, yet from inside, it appears to float above the house.

"The black glass is set directly into the ceiling and the walls below with no aluminium framing, which reinforces the contrast between the two elements," says Richardson. "And the colour of the glass adds a dramatic shadowy look by night and day."

Materials on the interior provide a continuation of those on the exterior. These include off-form concrete walls where marks made during the forming of the concrete are left exposed to provide a strong, textural finish.

"These walls give the house a robust quality and a sense of solidity," says the designer. "We wanted the house to express an honesty in materials, so it's a very simple, raw palette with modern forms."

A long concrete blade wall running right through the centre of the house forms a spine that provides an ideal place to display artworks.

"The owners didn't want the house to have a predictable gallery look, so we chose an earthy palette of concrete walls and stone floors, which is an ideal backdrop for the art," Richardson says. "Hanging the art on the central spine also ensures it is away from direct sunlight, yet there is still plenty of natural light."

A large cut-out in the blade wall beside the stairs not only opens up the space, but is also a framing device.

"It provides a play on the art," says the designer. "It frames different parts of the art as you move through the space, giving different perspectives."

Other artworks, including a large sculpture near the kitchen, have been accommodated within special niches. Even the suspended FireOrb fireplace has a sculptural quality.

The kitchen is defined by simplicity and designed so it doesn't intrude visually on the living area. Cabinetry is lacquered, while the ends of the island feature the same Pacific teak as the ceiling.

On the upper level at the front of the house the master bathroom has glass walls that can be opened up to the outdoors. External louvres, adjustable by remote control, provide privacy as required.