Non-slip surfaces, reliable fencing and a safe, shallow end are prerequisites when designing a swimming pool for a family with young children. Having to work within these boundaries, however, needn't override the desire for a modern look.

With its sharp, angular lines and sleek water feature, the pool featured on these pages reinforces this idea. Set in the garden of an Edwardian-style home, it forms part of an outdoor area used extensively by the owners and their three children.

Landscape architect Loredana Ducco, of Out From The Blue, says the family wanted a child-friendly pool that would provide an eye-catching view from their open-plan living area. Having a space where the children could ride their bikes was another requirement.

To create the various walls and pool surrounds, Ducco played with concrete and tiles in different finishes. A solid concrete wall, incorporated into the side of the swimming pool, doubles as the back of an equipment shed. A band of blue, navy blue and white mosaic tiles runs from the middle of this wall to the bottom of the pool.

"As well as blurring the distinction between above and below the water, the mural provides a shimmering focal point," says Ducco. 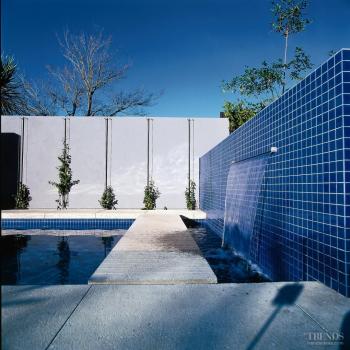 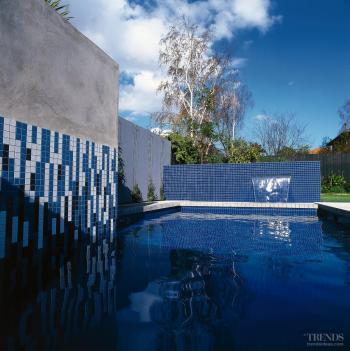 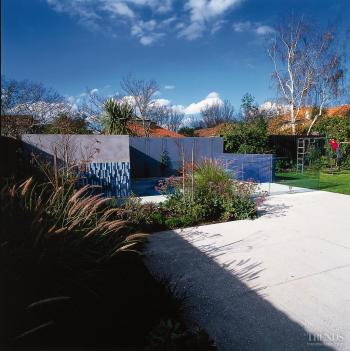 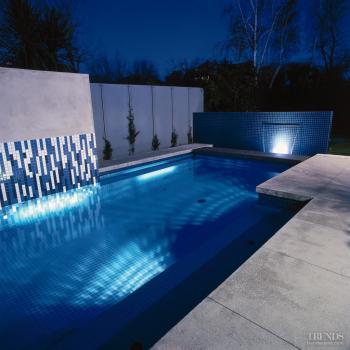 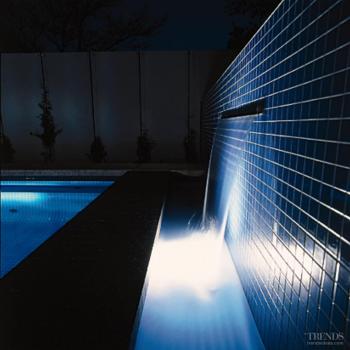 Blue tiles are used again to accentuate a wall separating the far end of the pool from the garden. A slim stainless steel spout allows a wide curtain of water to cascade into a shallow trough – designed extra-wide for the children to splash about in, says Ducco. Painted cement sheet cladding and toughened glass form the remaining walls. Sandblasted concrete around the pool and garden provide lots of space to play games and ride bikes.