Children love to have their own space, and it's all the more special if they get to have a say in how it looks.

That's precisely the way it worked for the family living in this extensively remodeled home – each of the four children had their own appointment with interior designer Kimberly Grigg of Knotting Hill Interiors.

"Each child was able to tell me their likes and dislikes and favorite colors, and discuss what was important to them," the designer says. "The only overriding theme requested by the owners, was that we choose the sustainable option wherever possible."

The soft lavender and green bedroom on the previous pages belongs to the eldest daughter, who loves horse riding and is an avid reader.

"This daughter had stayed at the Michelangelo Hotel in New York and also loved the idea of vintage furnishings with an edge," says Grigg. "We provided her with lots of places to curl up with a book – on the chaise, the window seats or on the bed, which has two swing-arm lamps. There are also lots of bookshelves and two recycled nightstands that we painted green." 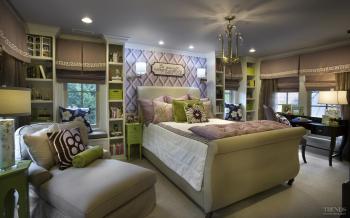 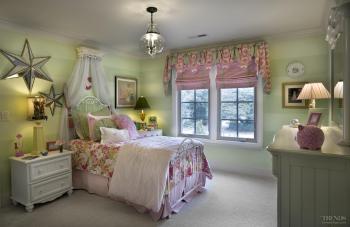 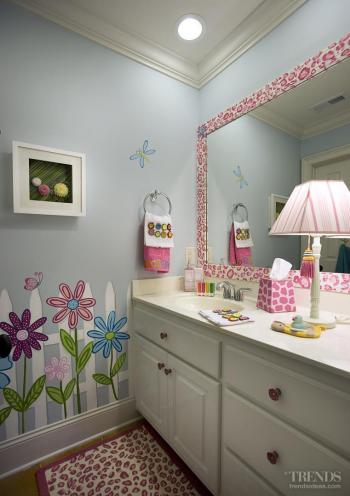 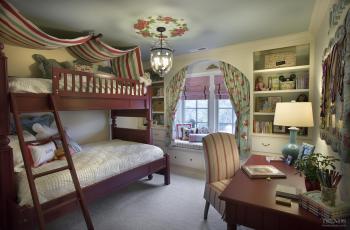 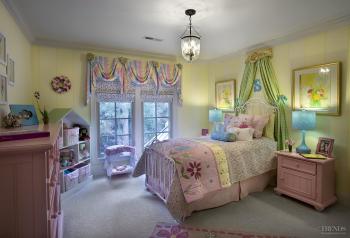 The designer introduced chocolate brown as an accent, and added a Greek key pattern to keep it a little edgy.

Another daughter, whose favorite color is red, wanted bunk beds and a "fort" for her bedroom. Grigg created a canopy above the top bunk to provide a sense of enclosure, and softened the red accents with pale aqua blue. A ceiling rose was hand-painted with flowers that mimic the fabric in the drapes.

For the two younger girls, who share a Jack and Jill bathroom, fresh pink, lemon and green tones were specified.

"We attic shopped for these rooms," says Grigg. "The tulle for the canopy in the green room was found in a backroom in our shop, and an old shelf became the crown. Existing furniture in the lemon room was repainted in a bubblegum pink. These bedrooms are also linked by the subtle striped painted walls – one vertical and one horizontal. While the ceilings in the other rooms are colored, these bedrooms have off-white ceilings to counter the busier pattern on the walls."