A well-considered library environment will provide a visually stimulating experience for students – one where the design encourages them to explore resources beyond their immediate focus.

When Jasmax was asked to provide a substantial upgrade to the existing library at AUT's Akoranga campus, a sense of social interaction helped dictate the form of the project. Alongside this agenda, Jasmax created a standing lesson in environmentally sustainable design.

Marko den Breems was principal architect on the forward-looking upgrade.

"Our brief was to expand the original 1100m2 library space to a 2500m2 educational facility. The building, running east to west, has had structures added along the south and east faces."

Internally, the upgraded building can be seen as a series of zones, with the facades reflecting interior changes in use. 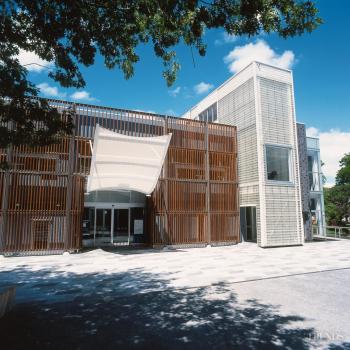 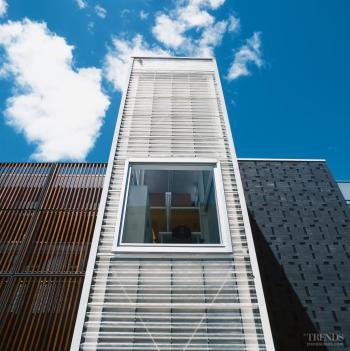 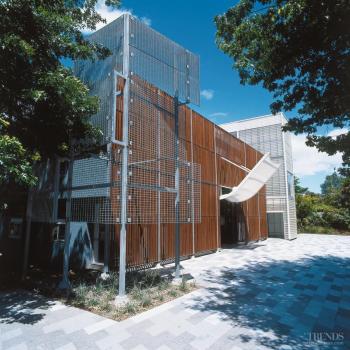 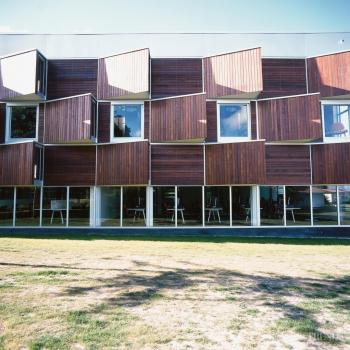 Varying floor levels between all three zones are accentuated by connecting voids, allowing the students to catch a glimpse of activity elsewhere. This might mean glancing through from an IT lab to a print pod, from a reference stack to an open study area. The visually connected zones break down as follows.

Firstly, the void in the original library building has been retained to create a welcoming entry zone. This houses the public areas of the learning centre – lending desks, lounge spaces and study desks.

South of this is a new services zone, a lofty translucent structure acting as a mediator between the existing building and the third IT zone, lying further to the south and to the east. The services zone plays a pivotal role in the building's social dynamic. For example, in this tallest structure, there are children's play areas, separate from the adjacent learning zones, but visible from them, allowing parenting students to keep one eye on their studies and another on their charges.

In addition to creating a structure with a social heart, the learning centre upgrade reflects the university's guiding principle of Kaitiakitanga – or sustainable development. This was approached in several ways, with the facades of the structure playing an important role.

A mesh screen, set out from the building on the north side, provides solar control. Deciduous climbers will be grown over the screen to create a wall that changes with the seasons and provides denser cover in summer.

The south wall has a similar pattern, this time in wood, accepting only directional sunlight – also reducing solar gain.

Apart from the computer suites, natural ventilation is used in all areas. Air conditioning for the computer room draws in and cools fresh air through wide underground ducts that vent through the floor. As the air warms, it rises and is vented out through ducts in the ceiling.

In the original building, steel trusses have been exposed to assist airflow, with changes to the skylights also helping - the new windows venting hot air and allowing fresh air to enter and cool the building. The windows operate automatically, guided by temperature and wind direction. Exposed concrete ceilings in the extension contribute to mild temperatures.

Whilst the services zone may appear as a three-storey space from the outside, the upper two levels are in fact one, acting as a stack ventilator shaft for the greater library structure. Fresh air, drawn from the cooler, south side of the building, is channelled over an external pond and waterfall, then on up through the services zone, which acts like an air cooling tower.

The extension also addressed issues of water usage, with 2,500 litre detention tanks installed to capture rain water off the library roof. This water is then utilised for flushing toilets, at the same time reducing strain on the building's storm water system – saving the AUT in both water and waste water charges.

Energy efficient light fittings reduce power usage for the building with a combination of local and automated controls meaning lights are only on when needed.

In addition to maximising energy efficiency now, the building design is also future-proofed for additional changes. While the concrete cooling vents are only in place on the ground level of the IT zone, holes have been punched through the steel structure, allowing for similar inclusions on the upper floor when this, too, becomes home to computer laboratories. This zone has a special cooling focus due to its high heat gain from the computers and high occupancy rate.

"From interconnecting voids, to the rain water catchments, every element of this upgrade offers a direct response to its environment and use," says den Breems. "It is also an educated response to the future."