Refitted offices by Seddon Associates optimise the architecture and views

The State Insurance Building, originally the BNZ Centre, is arguably the capital city's most talked-about skyscraper. Considered futuristic at the time of building, the bold, black glass exterior was matched by simple, graceful interiors – with floor-to-ceiling windows, old-school 12ft column widths and an absence of fussy detailing.

When Seddon Associates was asked to fit out the 21st and 22nd floors for IP company AJ Park, the brief was for an open, welcoming environment for the public spaces. The meeting rooms and office areas, however, had to balance openness against the need for quiet, as the company's work requires close concentration.

Asked to create an innovative interior on a tight budget, Seddon Associates was able to turn the good bones of the building to optimum advantage, says project designer Stephen Seddon.

"Essentially, the interiors in the public spaces were pared right back and a limited natural palette of macrocarpa and travertine introduced – the warm wood on the floors and the grey-white stone on the broad, well-spaced pillars."

While ceilings were left alone, attention was given to creating sculptural forms to occupy the reception. Seddon says that objects with a strong, shaped presence create a logic to the open floors and obviate the impulse to clutter it with detail. 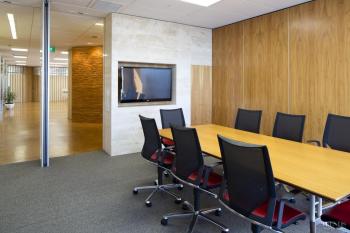 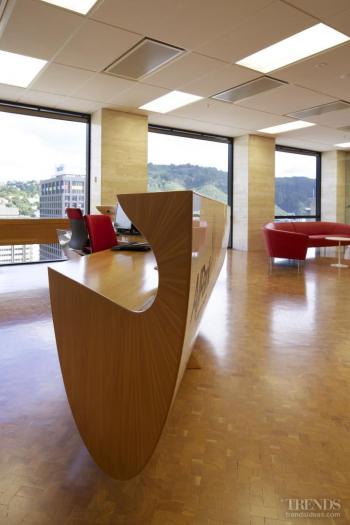 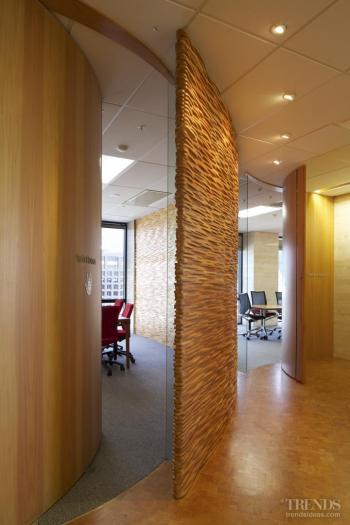 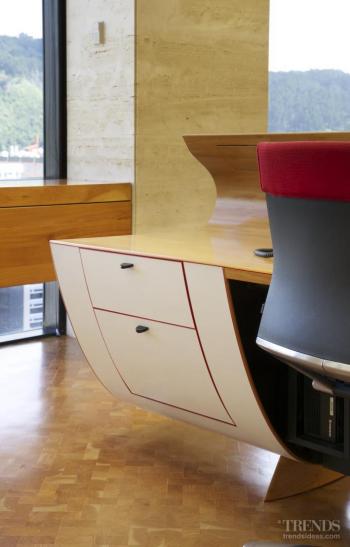 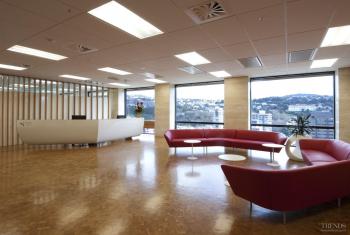 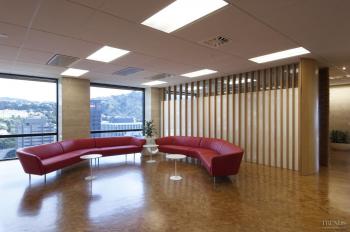 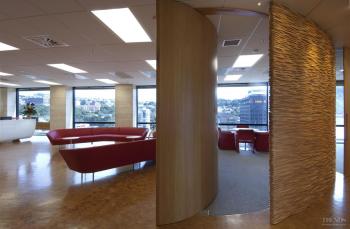 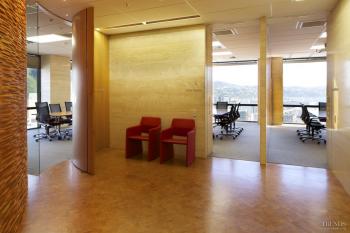 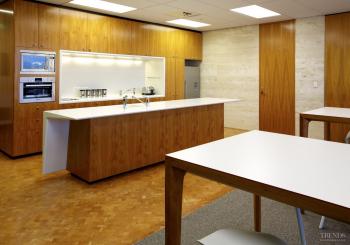 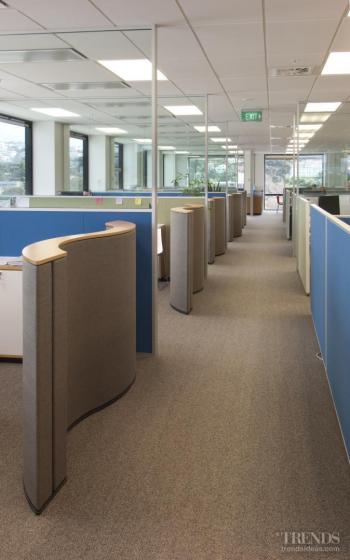 To this end, Seddon designed a reception desk that visually melds function with a bold, curvaceous form. Sleek and rounded when viewed from both sides, the unit also appears to float. This piece, in macrocarpa, is balanced by two long, low European leather sofas. Partitions were designed at both ends of the area, shielding offices one way and the boardroom the other.

"The room dividers and curved boardroom doors and walls also have an artistic presence of their own and when seen together they combine visually to form a peaceful greater composition."

The palette is continued inventively right through these areas. Macrocarpa, for example, is used as solid wood on the reception and floor, as veneer on the meeting room doors and as band-sawed stacked elements on feature walls.

"The area is used to meet and greet people from all walks of life looking at intellectual property – many with a designer's eye themselves – and so the finished reception and meeting rooms achieve a warm, wecoming environment with broad appeal."

The upper end of the slat partition screens are in glass, allowing natural light to spill across from one area to the next. This was in response to another request by AJ Park – for staff to feel a sense of togetherness and connection across both floors. In addition, the meeting rooms all open up to form one large space, culminating in the staff room.

In the fit-out of the offices, which occupy around one-and-a-half floors, the designers ensured that every seat enjoys the spectacular Wellington views.

"To balance outlooks and a sense of openness against the need for peace and quiet, we created clear glass partitions in the office environment," says Seddon. "Used in concert with state-of-the-art acoustic screens – wavy to continue the theme of the reception and boardroom – and sophisticated sound masking systems, the glass panes achieved the level of separation required."