Despite its bold, minimalist aesthetic this new home has an organic feel that reflects a primeval link with the landscape

Many new houses are built to maximize a picturesque country setting. But, for most of these homes, a return to nature simply means taking advantage of the views and providing a good indoor-outdoor flow.

The architect and interior designers of the house featured on these pages took a different approach. The link with the natural landscape wasn't simply visual – it was an intrinsic element of the house design, determining both its structure and materials. Architect James Choate and interior designers Charles Gandy and William Peace say the owners wanted the house to express an almost primeval association with the land – a sense that it was part of the evolving geology of the landscape.

"At the same time, it was important to create a contemporary, minimalist aesthetic, with the structure and interior pared back to the essentials," Choate says. "Raw materials that have an organic association were crucial to the look."

"The stone walls create a sense of a crumbling ruin – a return to the earth," says Choate. "And while the concrete and steel are man-made materials, they too have an organic feel." 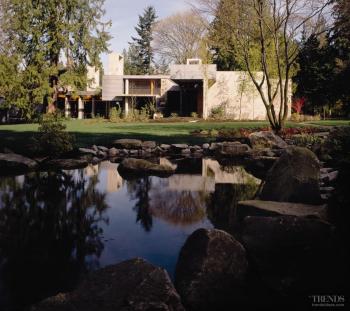 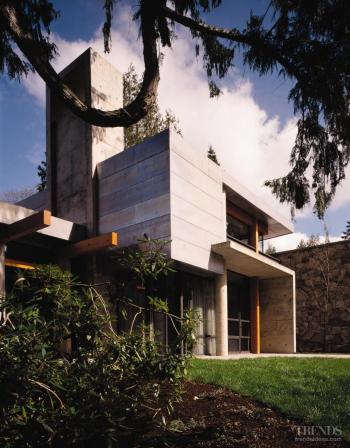 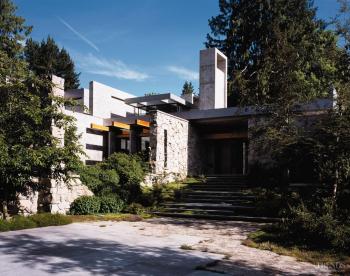 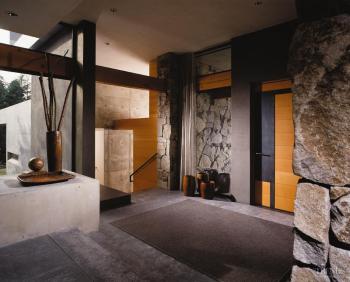 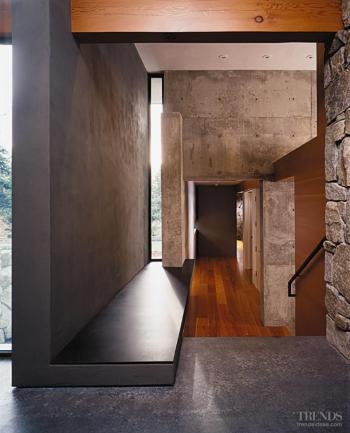 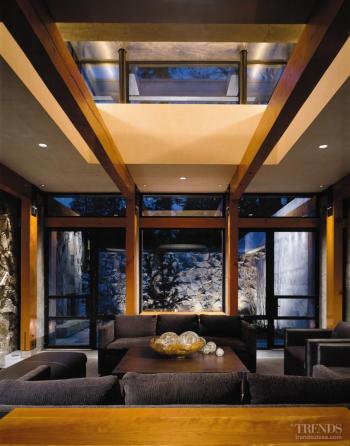 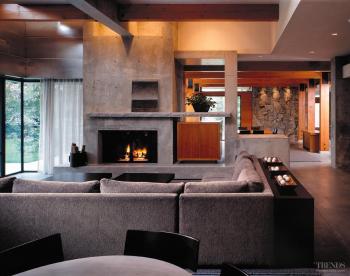 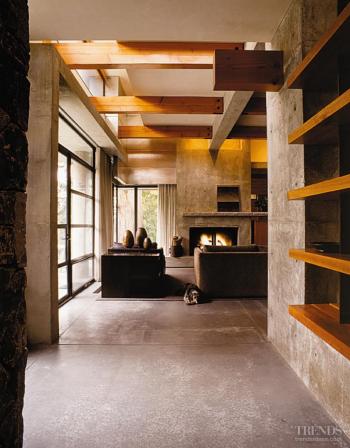 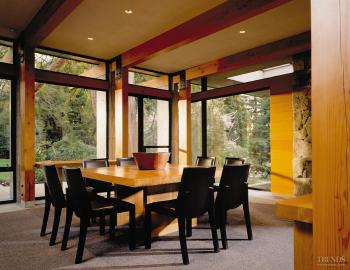 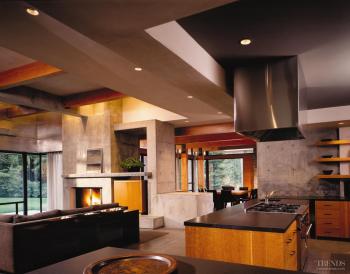 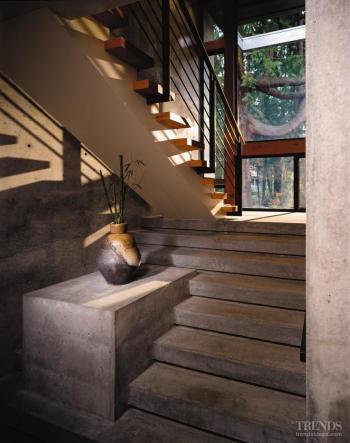 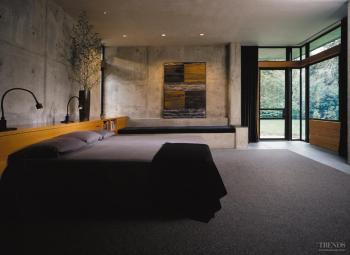 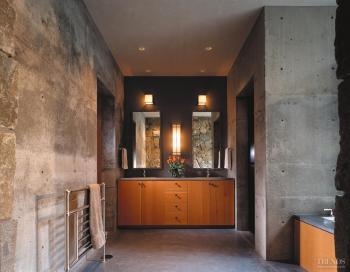 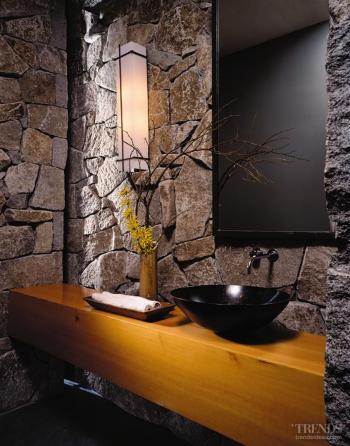 To further link the house with the land, the concrete and stone walls and large wood beams extend beyond the house itself.

"We did not want the inside to feel separated from the outdoors," the architect says. "Extending these planes out into the landscape helps to fuse the man-made environment inside the house with the natural environment outside. The transparency of the glazed doors and windows also blurs the line and provides a way to experience both environments at once."

Right-angled planes create a strong lineal look throughout the house. Choate says there is no distinction between the materials used for vertical and horizontal planes. Concrete and wood are used both vertically and horizontally.

"This was a way to mimic the changing patterns in the natural environment," he says. "Similarly, there is no ordering device, such as a grid or module. The structure has evolved from the functions required within the house and the need for sun and natural light."

Choate says the house, which was designed around three mature cedar trees, needed to have more of the feel of a rocky outcrop, than a man-made object. Within these parameters, however, there is a symmetry to the formal areas.

"Within the asymmetic layout of the house, these rooms provide a focus and help define the sub-space within the larger, flowing space. This symmetry at the center is also typical of nature."

The spacious feel of the interior is enhanced by the open-plan layout and cut-outs in the concrete formwork.

"It was important to be able to see through to other rooms," says Choate. "Rather than providing a series of boxes to enclose people, the walls and planes are arranged to create spaces for people to flow through and inhabit. For this reason, also, the outer corners of rooms are chopped off and glazed, avoiding a boxed-in feel."

In keeping with the minimalist aesthetic and the desire to "let the architecture do the talking", the raw materials have largely been left untreated and undecorated. However, to balance the cool look of the gray concrete and steel, reclaimed Douglas fir beams are used extensively.

"These beams and columns weave their way through the house like a thread that ties everything together. They provide a warm contrast to the other materials," says Choate.

In addition to raw concrete, there are walls and ceilings of raw, off-white plaster. The ceiling above the kitchen was tinted a dark gray to help define the space within the open-plan area. Here, cherry cabinetry matches the warm wood tones of the fir beams and the shelving planks.

William Peace says furnishings throughout the house were chosen to be consistent with the architecture and the simplicity of its forms.

"The owner wanted the house to be understated, under-detailed and under-furnished," he says. "The furniture needed to complement the architecture, not detract from it."

Peace says the palette was dictated by the hard concrete and stone surfaces, and the warmer look of the wood.

"This translated into neutral fabrics in natural fibres. For example, the warm-gray tones of the L-shaped sofa in the family room and its soft, plush cotton chenille, which is very inviting to the touch, counter the austerity of the concrete.

In the master bedroom suite, raw concrete walls again define the structural elements and provide an austere contrast to the view out the corner windows. The austerity is also balanced by a soft, wool carpet and an extended wood bed head.