In New York, an eclectic, custom-designed and built apartment reflects the urban environment and contains aspects that relate to earth, air, fire and water

Designing your own home is many a layman's dream – but for an architect, a custom-designed and built house can more easily become a reality.

For architect Adam Kushner, creating this apartment for himself and his wife was a long sought-after desire, one he considers both an expression of himself and an important achievement of his architectural career.

"The entire apartment is a narrative for how one lives in the city. It is book-ended with materials found in the urban environment, such as subway doors used on the old New York City Redbird trains," says Kushner.

The lower floor is an open space containing the kitchen, living and dining area, and the children's room. It is designed with urban lifestyles in mind, and is based around themes of the classical elements of earth, air, fire and water.

An in-floor Jacuzzi and Mexican beach stone flooring are representative of water, while at the other end of the room, a fireplace made from a wok represents the element of fire. Wooden flooring and walls, along with exposed brickwork, allude to the solidity of the earth. 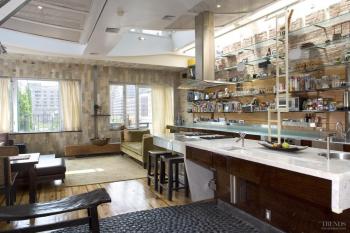 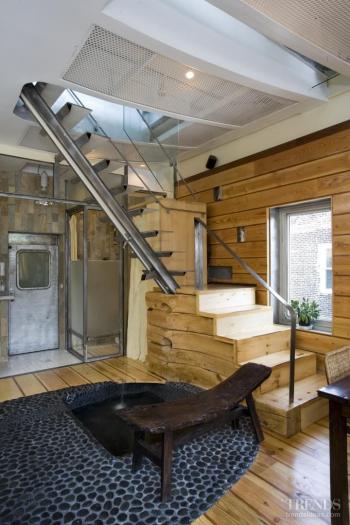 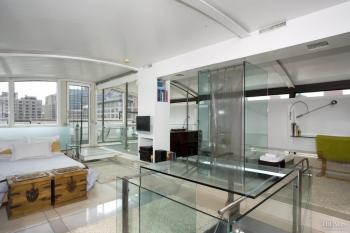 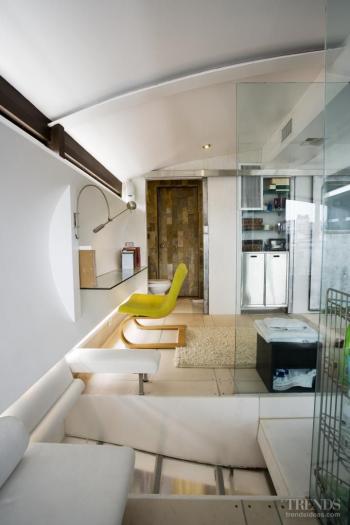 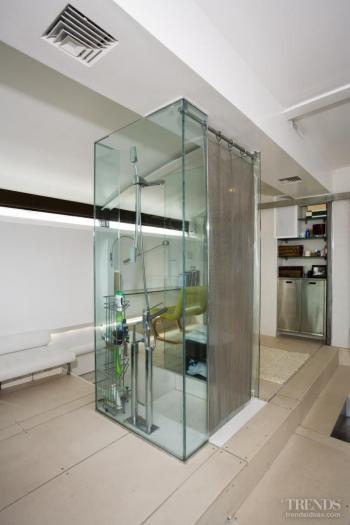 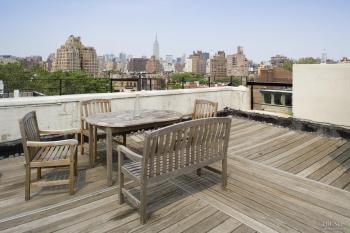 This exposed brick, and the tiles used on the walls here and in other areas of the home can also be seen to symbolize the evolution of city life that Kushner is interested in, as they relate to materials seen in older New York City buildings.

Found objects are used throughout the home to represent this urban aspect of the design theory, such as the old steel wok used for the fireplace and the large fir timber block that it sits on, which was found in an old industrial warehouse.

Extensive bookshelves above the kitchen workspace display photographs, books and other artefacts of the couple's life. A rolling ladder provides access to these shelves, while a frosted glass catwalk above lets in the natural light that illuminates them.

"It's white-on-white and, like a cloud, nothing appears to be connected. The walls and ceiling are curved, and the walls are separated from the ceiling and floor by strips of glass."

This element of the design means the upper level is flooded with natural light. A south-facing rear deck is also on this level, as well as a terraced area, accessible through the powder room. A section of the upper floor is removed and open to the lower floor. Above this is a large rolling skylight, allowing a view of the sky from the living room below.

A frameless glass shower enclosure stands between Kushner and his wife's study areas. Positioned over a glass-bottomed bath, this is designed to represent a connection with the water element below.

"The tub and freestanding shower make a clear transition of water to water between the upper and lower floors. It's a bit unusual, but we find it fairly comfortable and practical," says Kushner.

The bedroom area is on a rolling platform, adding another point of difference to this unconventional and original home.