When the old Environment Canterbury (ECAN) building was compromised in the 2010-11 Canterbury earthquakes, the Regional Council teams were scattered across multiple buildings. It soon became high priority to get all ECAN staff back into one building. In 2014, Naylor Love Canterbury began construction of the new, purpose-built ECAN office.

Designed by Wilson & Hill Architects, the five-storey building now provides 8500m² of office space and car park for over 450 staff. The 6000m2 site also has a separate two storey cycle and locker building that can store 120 cycles and acts as a changing facility for those biking to work.

The inclusion of several earthquake-resistant strategies plus a string of green elements made this a tricky build for the experienced construction team, says Naylor Love's project director on the job, Stephen Lynch.

"The innovative building is also base isolated below ground floor due to a combination of lead-rubber bearings and pot bearing sliders, tuned to give a positive overall performance in a seismic event. The superstructure is designed to remain in its elastic range up to a seismic event with an annual probability of one in a 1000 years." 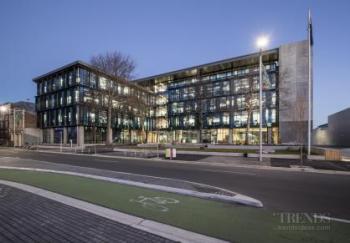 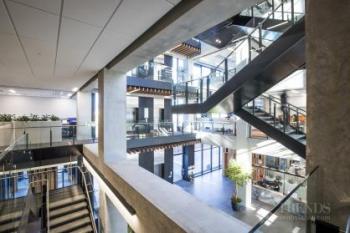 However, this is only part of the complex seismic-resistant story. The combination of base isolation, tuning the concrete frames for compatible response, and articulation of the building's crisscrossing internal atrium bridges has resulted in relative differential movements that are absorbed within the internal bridge structures – without need for seismic separation.

And the healthy response of the building has been confirmed using a 3D nonlinear, time history analysis, developed by the University of Canterbury.

As well as actually being strong, the building looks strong, too – reassurance for staff and visitors alike. Essentially, its precast concrete frame has been expressed throughout the building to give the interior a sense of its solidity.

As befits a hub for a body responsible for a range of environment-related governance and services in Canterbury, the ECAN building also reflects the latest in sustainable features.

"Cutting-edge, energy-efficient technologies are utilised for heating and cooling the building – with the ground source heat pump obtaining the water from an artesian well for the chilled beam system," says Lynch. "The chilled beam system is installed throughout the upstairs offices, with all HVAC controlled via the Building Management System. The ground floor has variable air volume to the meeting rooms, council chamber and theatre."

An onsite generator was installed to power the building in case of a future seismic event but also to control the loading of the building over peak times.

The building offers a healthy environment in a different way, too – in terms of an easy social connection between the public and regional councils. Large areas of the ground floor are given over to public space, with meeting rooms and work areas for community groups. There's also a servery at ground level to cater to functions and courses."

The atrium encourages internal staff connections via the stair bridges, which have places to stop and talk. In addition, the council offices are all open-plan, further improving internal communication.

This is also the first office building in New Zealand to use Gigabit Passive Optical Networks, bringing fibre internet straight to desks.

Other green aspects to the building include plenty of daylight, the use of FSC sustainable Southland Beech timber throughout, the choice of low environmental impact surfaces, and aspects like recycled rainwater and low-flow plumbing.

To enable the building to be finished on time, consent stages were split, allowing the constructor to get on site early and begin with large volumes of work without waiting for approval for later works. Naylor Love completed the stand-out building on time, and at 120 per cent of code.